70 days' captivity in Syria in pursuit of documentary 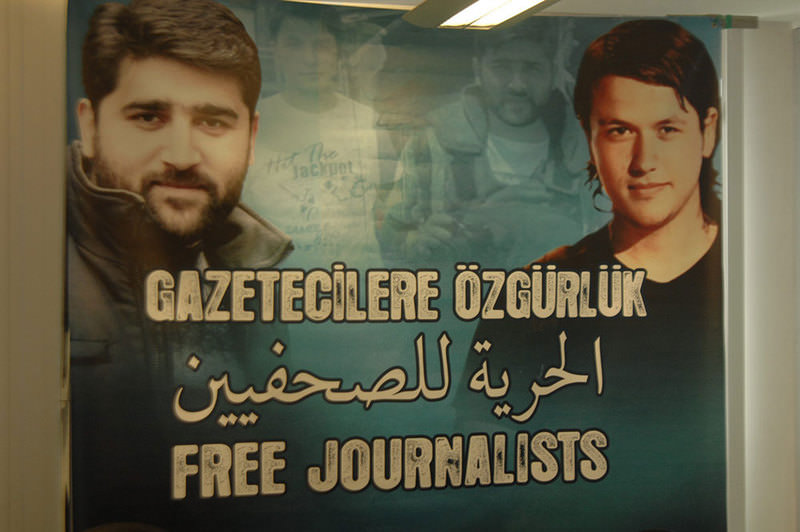 Cameraman Hamit Coşkun and journalist Adem Özköse set out to Syria to document the severe conditions that women and children especially had to endure. They ended up being captive for 70 days

In 2012 a horrific event took place when cameraman Hamit Coşkun and journalist Adem Özköse set out to film a documentary about the lives of the people, especially the children, living in Syria. What they were not expecting was to be kidnapped and held hostage for 70 days. Coşkun talks about his breathtaking story and the hardships he and Özköse went through in his first book, "Gez Göz Esaret: Suriye'de 70 Gün" (70 Days' Captivity in Syria), which hit shelves in February 2015.

The reason Coşkun and Özköse wanted to film a documentary on the hardships the people, especially the youth, in Syria face in their daily lives was because they believed that we, the people of the modern day, must rebel against tyranny and persecution and we must protect and stand beside the innocent. "The children in Syria are dying and when someone asks me, 'What have you done to stop this?' I must have an answer to give. I knew how to use a camera, not pointing the lens toward the powerful, but on the contrary, toward the world of the weak and helpless," Coşkun says in the book. "When Adem Özköse said that he wanted to narrate the events going on in Syria and proposed to me to join him on such a documentary, I immediately said yes. We were going to recount the war from the perspective of the children. The most meaningful thing my camera could see would be the war though children's eyes," Coşkun says.

Although all intentions were though out and well-intentioned, things did not go as planned. In "Gez Göz Esaret: Suriye'de 70 Gün," Coşkun talks in detail about the events leading up to being taken hostage and the emotional odyssey he and Özköse went through.

Passing the border to Syria

After crossing the border illegally with the help of two smugglers, Coşkun and Özköse were officially in Syria and ready to start their documentary. After a walk of a couple hours through the mountains they arrived at a small town where they were picked up by a black vehicle. A short ride later they arrived in the city of Idlib, which was under the control of the Free Syrian Army. Coşkun was able to shoot some footage of children on the street shouting out slogans, expressing their admiration for President Recep Tayyip Erdoğan. Coşkun says: "The Arabic writings on the outer walls of the homes grabbed my attention. Adem told me they said, 'Get out Assad! Long live the Free Syrian Army!' " After spending the night at an arranged home, Coşkun and Özköse headed out the next morning to drive around and get to know the area a little better. Coşkun took out his camera and started filming the guide in the car as he talked about the area. A few minutes later he turned his camera toward the street and in the frame saw an armed group of 70 to 80 people. The sound of gunshots was heard from a distance as their car was stopped. The armed group was the group that the Syrian people were most scared of - the "sebbihas." Sebbiha means "ghost" in Arabic. Coşkun, Özköse and their guide Baha were handcuffed and their eyes where blindfolded so they could not see where they were being taken. This was the beginning of the horrifying series of events awaiting Coşkun and Özköse.

Being kidnapped more than once and life in a cell

After being transferred two times, staying in the first two hostage areas for 12 days, Coşkun and Özköse were taken to their final destination, a two-square-meter small cell where they would spend the rest of their 70 days as hostages. During their stay, they were questioned multiple times about who they were and why they had come to Syria in the first place. Even though Coşkun was telling the truth about wanting to film a documentary, he was constantly accused of lying and was threatened with being locked up for life if he did not come clean.

About the claustrophobic cell where he stayed for 58 days, Coşkun says, "My cell was no different from a soilless grave." The walls were stained with blood from the torture that was practiced on his predecessors. The floor where he had to sleep was covered in filth and cockroaches. Not to mention that it was winter and the concrete floor was biting cold.

Being locked up underground without a fragment of sunlight or a clock makes it burdensome for someone to keep track of day and night. Coşkun found that the guards switched shifts every two hours and thus was able to calculate the time of day, making it easier to count and keep track of the days he had been held hostage.

One of the most critical aspects that helped Coşkun keep himself sane while he was in his confined cell was his confidence and faith in God. He was allowed to have a copy of and read the Quran and pray regularly. Coşkun expresses his feelings in the book: "I felt as if the Quran was sent down specifically for me. I felt as if I was talking directly to God. I took great pleasure in praying, and I did not want to stop praying. I experienced the most spiritual and divine moments I have ever experienced while I was praying in my cell."

On the 27th day Coşkun was finally allowed a shower. He says: "My hair was greasier and dirtier than ever. I had not showered in almost a month and was filthy. I had never had lice before, but things did not look so bright." After being allowed a one-minute shower with only a small bar of soap, Coşkun was taken out and put back into his cell. Of day 35, Coşkun says: "My finger nails had grown quite a bit. Until then I would just bite them short, but this time was different. I had torn off my toe nails as well."

On day 41, it was Coşkun's birthday. He turned 21 in his filthy, tiny cell and begged the guards for some good news - they did not give him any.

Coşkun says in one of his entries: "Day 54: Tonight one of the doctors came again. The same play was being performed once again in front of my eyes. People who were skin and bone and others who had bandages on their faces ... The doctors would not even care for them for more than five seconds. The prisoners would see the doctor, he would have a look and send them away. The doctor would later give the guard a pill to give to them. There was a prisoner who was hopping around on one foot. I thought to myself, 'What an earnest, sincere-looking young man, and handsome too.' Then when I looked down to see why he was hopping, I saw that his left foot had rotted away and was jet black. The doctor took a look at his foot, and once again sent just one pill with the guard."

One day when Coşkun was sitting in his cell, the door opened up out of the blue and he was told to take a shower. After a one- or two-minute shower he was taken outside for the first time in almost two months where he could see the sun. He saw Özköse for the first time since they had been locked up. Later, they were taken to a room where they were greeted by Bülent Yıldırım, the head of the İHH Humanitarian Relief Foundation, and a couple of other people. They were told everything needed to get them out of Damascus - Coşkun later found out they were not in Aleppo, but in Damascus - was ready, and they would be let go shortly. A week after that meeting, Coşkun and Özköse were let free and were able to come back to Turkey. With their families waiting anxiously for 70 days, the horrific story had come to an end.

Even though Coşkun and Özköse were thrilled to finally be free, they were sad when they were leaving. Coşkun says: "We were free, but what about all of those innocent children, elders and women? We are innocent, we should be free. It is our right to be outside those cells, but they are not guilty either! I realize how fatuous I was living in Turkey. These people here would give anything, even their own lives, for the lives we are bored of."

This story, rich with legitimacy and frankness, is both heartbreaking and eye opening. Reading about the staggering events that Coşkun and Özköse went through in the first person narrative is deeply touching and all the more astonishing. Make sure you pick up a copy of "Gez Göz Esaret: Suriye'de 70 Gün" next time you're in the bookstore.
Last Update: Apr 05, 2015 3:11 pm
RELATED TOPICS