WWII, an era when Nazis plundered art and memories 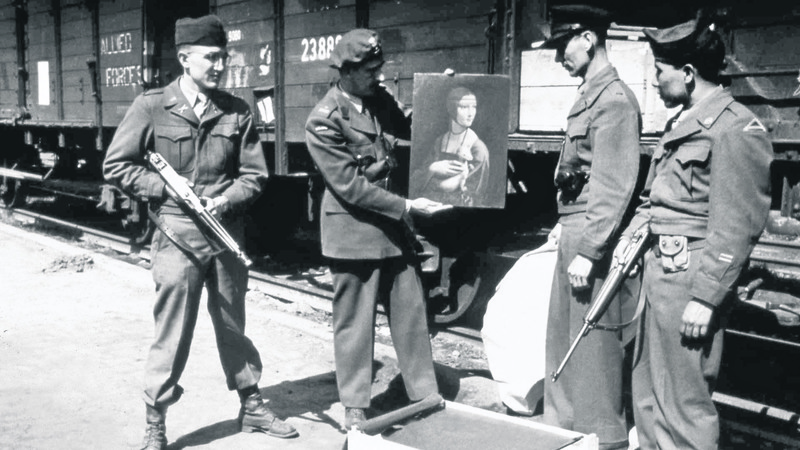 The generation that lived through the late 1930s and 1940s not only witnessed the deaths of millions of innocent people, but also faced the danger of losing their history, memories and most importantly, art - the heritage of all humanity

Adolph Hitler, the fascist leader of Germany at the time of World War II, considered himself a connoisseur of the arts, yet he declared war against all modern art movements such as Cubism, Futurism and Dadaism that flourished in the beginning of the 20th ‎century, as well as modern artists of the time, including Picasso, Matisse and Courbet, before declaring war on nearly all of Europe. He dreamed of collecting all the major works of art in Europe, including paintings and sculptures, with a desire to build the biggest and most comprehensive museum in the world in his hometown of Braunau am Inn, located in present-day Austria. With a network of agents, soldiers and a group of art experts, Hitler embarked on the largest systematic theft of all time, which is now referred to as the Nazi Plunder. Although most of the artwork that was plundered by the Nazis was recovered by the Monuments, Fine Arts and Achieves Program (MFAA) - also known as the Monuments Men - right after World War II ended, thousands of artworks are still missing or are hanging on the walls of museums all over the world waiting to be returned to their rightful owners. Thanks to director Simon Curtis' 2015 British-American drama "Woman in Gold" starring Helen Mirren, Ryan Reynolds and Daniel Brühl, Nazi Plunder is on the agenda once again.

As an unsuccessful artist who was rejected by the Vienna Academy of Fine Arts, Hitler was a keen collector of art, but he was obsessed with a certain ideal aesthetic. When he rose to power and became the Chancellor of Germany with the Nazi Party in 1933, he began imposing his ideology as well as his taste in art on the German people. Beginning in 1933, the Nazis began looting the art of Europe, first secretly through agents affiliated with the Nazi Party, then openly until the end of the war. One of the first commands Hitler gave as the leader of Germany was to remove all modern art from the walls of the country's museums. Hitler's regime adopted the term "degenerate art" to describe paintings and sculptures with deformed shapes and figures, and argued that modern art was un-German, but was Jewish or communist in nature. The Nazi ideology found Judaism as well as the art produced by the Jewish community offensive to the Third Reich. In 1937, modern paintings and sculptures collected from all over Europe, especially in Germany, were displayed at a show titled "Degenerate Art" in Munich, encouraging people to look down on such "unrealistic" and "offensive" artworks. Soon after the exhibition, these artworks were sold at auctions and Nazi-funded art galleries at low prices to finance the party and the upcoming war.

With the occupation of Poland, the Nazis began following a new path: They did not only aim to procure artworks, but to destroy the culture and arts of an entire nation starting with Poland. Nazis considered the Slavs as an inferior race that should be annihilated whether they were Jewish or not. After they invaded Poland, Nazi soldiers targeted national monuments, art galleries, museums and the houses of art collectors. The Royal Castle in Warsaw perhaps suffered the most among other monuments in the country. There is a well-known saying that Poles cannot live or breathe without the shadow of the Royal Castle. Believing the castle was the symbol of Polish nationality as well as the resistance, the Nazis placed dynamite on the walls of the castle and blew it up before they left the city. Despite everything, the Poles rebuilt the castle as a sign of their national unity after the war ended.

However, Poles were not the only ones who suffered from the Nazi persecution. The Nazis plundered 20 percent of all Western art and one third of all private art in France. The famous Louvre Museum could only save its collections by hiding them in country houses around France. Many of the artworks featured in the private collections had sentimental value to the families. Toward the end of the War, confiscating art was not enough for the Nazis. They not only wanted to destroy the Jewish community in Europe but also their memories and what was left of their lives before the war. When soldiers looted the houses of Jewish families, they took everything they could get their hands on, from ceramics, paintings and books to religious treasures and even furniture.

Following World War II, some artworks that were stolen by the Nazis from private collections were returned to the rightful owners. However, thousands of them remain unclaimed and have found their way into the collections of private or state-funded museums. Today, the heirs of Nazi-era art dealers sue art galleries, museums and even states for the return of their family assets. Some are lucky enough to have been reunited with what is rightfully theirs, yet many are still struggling with legal issues. The film "Woman in Gold" touches on a similar story: the legal war between the Austrian government and Maria Altmann over five paintings by the artist Gustav Klimt, where Altmann struggles to regain a painting of her aunt that Klimt painted. Inspiring three different feature-length films with her story, Altmann and her legal war is seen as a legal turning point in the return of the artworks that were plundered by the Nazis.
Last Update: Apr 08, 2015 10:20 pm
RELATED TOPICS