Penniless on bicycle for eight mohths 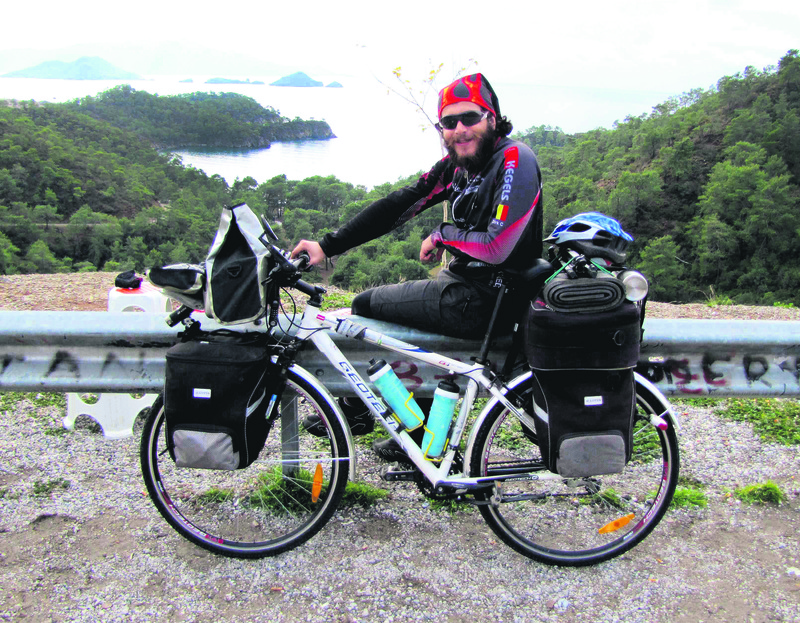 by Zeynel Yaman Apr 10, 2015 12:00 am
Journalist, photographer and traveler Hasan Söylemez broke his bank card, handed out his last money in his pockets to children and toured Turkey in eight months by cycling 10,000 kilometers. Everybody said that they cannot make their dreams come true because they lack of money; however, Söylemez pull down the money wall in our brains and proved it otherwise. He sometimes lost his way but he found himself. He published his penniless yet adventureful journey into a book.

"Hayata Yolculuk" (Life Journey) is a travel book on love, solidarity, sharing, loyalty and hope which guides you to your inner self. The journey which took place in the most virgin parts of Anatolia encourages people who want to leave everything behind and those believing that the real life is far away from the skyscrapers. Traveler Hasan Söylemez whispers to those that are about to set off for a journey: "The only can only lose your way by touching a soul; the soul of yourselves, people and nature."

Söylemez set off from Istanbul and made his way through the whole Balck Sea Region before cycling to East and Southeast regions. Then, he headed to the Mediterranean, the Aegean Region and returned to Istanbul through Tekirdağ. This journey provides us almost all the necessary materials if we want to write a novel. We witness Söylemez's struggle with himself as well as the nature. The writer who covered 10,104 kilometers on his bicycle had no money on him throughout his journey; hence, he depended on others to meet his basic needs such as food, sleep, rest and water. The traveler placed himself in such an asymmetric relationship; he said, "I have no money. If you give me food, I will help you with your chores." He did not always receive positive responses so he left himself to the mercy of people whom he met along the way and the nature.

Struggle with nature which people living in the urban areas have nothing to do with is the second of the most important three legs of the book. It depicts the hardships of a journey under the hot sun, thunderstorm, in the frost, the dark of the night and on the footsteps of the mountain. On the other hand, Söylemez's struggle with people was rather constructive in general. The writer explains it with the remainings of Anatolia's wandering dervish tradition. Noting that he hit the roads due to the pain inside of him, he says, "Nobody leaves his comfortable life, beloved ones and habits and hit the roads with no money in his pockets. So exposed and so needy..." Finally, he says he is grateful to encounter with people who show sympathy, offer a slice of watermelon and ask about his health and wellbeing. Hasan Söylemez's 206 pages long book from Hayy Publications has already on the bookshelves.
Last Update: Apr 10, 2015 1:50 am
RELATED TOPICS