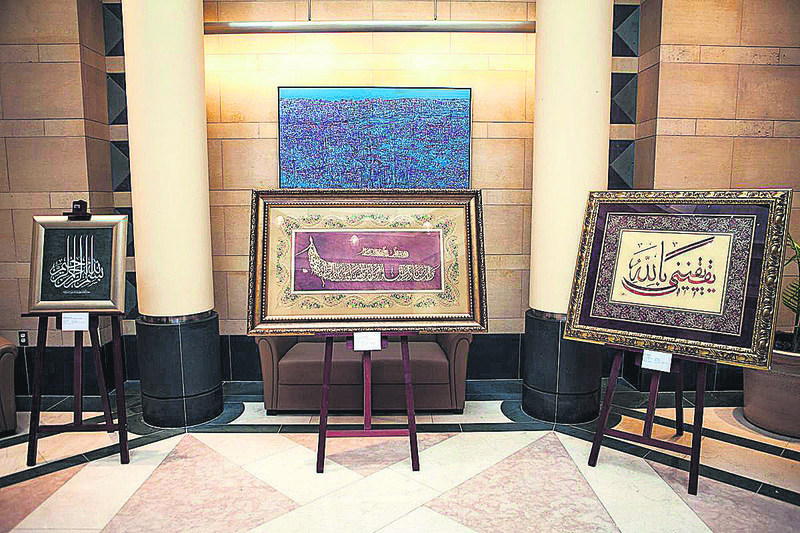 by Daily Sabah with AA Apr 12, 2015 12:00 am
The Presidency of Religious Affairs reopened the calligraphy exhibition "Aşk-ı Nebi" (Love of the Prophet), as part of commemorations of the birth of Islamic Prophet Muhammad at the Haghia Sophia museum on Friday. During the opening ceremony, the historic museum witnessed the first Quran recitation under its roof after 85 years.

The head of Religious Affairs, Mehmet Görmez, undersecretary for Ministry of Culture and Tourism, Ahmet Haluk, and Istanbul Governor Vasip Şahin attended the ceremony, which saw Ali Tel, imam at the modern Ahmet Hamdi Akseki Mosque in the capital Ankara, recite a passage from the Islamic holy scripture, Quran. The art collection, which features 63 works of Turkey's master and junior calligraphers along with international names and female artists, showcases hadiths, verses from the Quran, Hilye-i Şerif" (The noble description of Prophet Muhammad) and quotes written in various calligraphy styles such as kufic, muhaqqaq, thuluth, diwani, rayhani, naskh and ta'liq. It was previously on display in New York and Cuba. Earlier this year, Abdülkadir Özkan, Secretary-General of the Islam Culture and Arts Platform, which prepared the exhibition's Latin American program, said that "Aşk-ı Nebi" was scheduled to be displayed in Brazil with a different collection as well as in Argentina and Australia as part of the Sacred Birth Week celebrations. The exhibition will feature works from renowned calligraphers such as Mehmed Özcay, Hasan Çelebi, Cavide Pala, Eyüp Kuşçu, Ahmed Fares Rızq (Egypt), Bijar el-Hac Kerim el-Erbili (Iraq), Bijar Arbilly (Iraq), Mahfuz Zunnun el-Ubeydi, Muhammed D. Cellul (Syria) and Ammar Maliki. The calligraphy collection can be seen until June 10.

Aşk-ı Nebi was also on display at the Haghia Sophia last year. Situated on a hill overlooking the Bosporus, the Haghia Sophia was designed by Greek scientists Isidore of Miletus and Anthemius of Tralles. It served as a cathedral for almost a thousand years since 1453, when it was turned into a mosque with the conquest of Istanbul. It later was secularized and converted into a museum in 1935. Hagia Sophia turned into a model for later churches and mosques and influenced both Eastern and Western art.
Last Update: Apr 12, 2015 10:33 pm
RELATED TOPICS