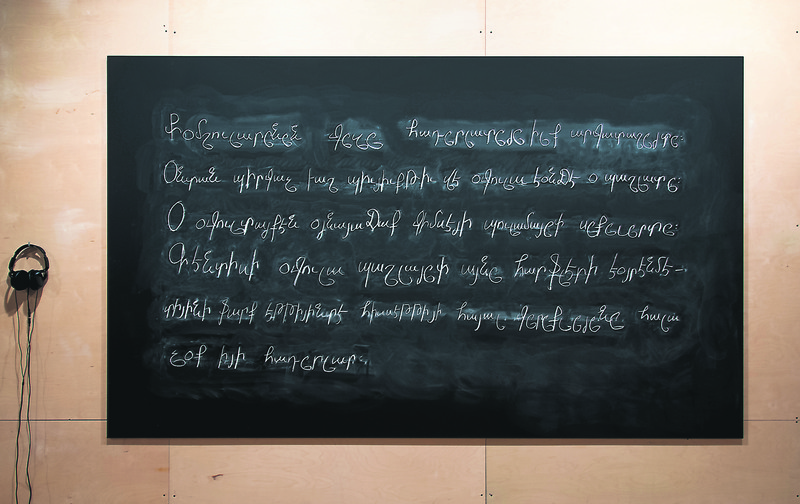 SALT Beyoğlu hosts ‘as if nothing has ever been said before us,' Dilek Winchester's composition of works that offer a critical exploration of the cultural polyphony of the Ottoman Empire

Not so long ago a Turkish newspaper ran an influential television ad which consisted of a single sentence: "Are you aware of the danger?" Before viewers were able to ask themselves what that danger could be, the ad provided them with the answer in a visually curious way. The question, "are you aware of the danger?" was written from right to left, in what can be called a pseudo-Arabic-Turkish language, with Latin letters that were made to resemble the Ottoman Turkish script. The question posed in the ad was, therefore, its own answer. The danger we were supposed to be aware of was the Arabic-looking script with which the question was posed. Last Tuesday, while listening to Dilek Winchester and Hera Büyüktaşçıyan at SALT Beyoğlu's walk-in cinema, I was reminded of this ad and how it reflected the ideological foundations of modern Turkish state.

"We are knocking on your doors with an emotion and arrogance unparalleled in world history and without fear of seeming like those who are conceited and behave as if nothing has ever been said before them." | Winchester transcribes this sentence (on the photo above) phonetically in Turkish but with letters from five alphabets:Armenian, Greek, Hebrew, Latin and Arabic.

"A dialogue between two islands" was a continuation of Winchester and Büyüktaşçıyan's ongoing dialogue during their commute by boat from Heybeliada to the city. "The 60 minute long journey has become a base for building up their own islands that imbibes various different and similar fragments of time, space, memory and language," according to the press release. "This ongoing dialogue has become the essence of a joint storytelling."

During the event Winchester talked about how many modernists consider the cultural world of Ottomans as a complete mess. To modern eyes Ottoman literary life often seem like a Tower of Babel where the sheer number of languages spoken makes life incredibly complicated. Ottoman Turkish, the empire's official language, was written not only in Arabic but also Armenian script. The Arabic script, too, had a hybrid quality: Ottoman Kurds wrote works with it. Ottoman culture's linguistic hybridity was later seen as a problem that needed to be dealt with through a centralized program of cultural standardization. This was how using scripts other than Latin and languages other than standard Turkish came to be seen as dangers that threaten the foundations of the country. Letters, once used to express people's ideas, gradually turned into objects of fear.

When early twentieth century literary scholars started writing histories of Turkish literature, they were horrified to see how non-standardized nineteenth century literary culture was. In order to navigate their way in that world they used the Ottoman Turkish as their compass. Dilek Winchester's video works, "Alphabets [Karamanlidika]" and "Alphabets [Armeno-Turkish]" screened prior to their talk on Tuesday, show how problematic that navigation had been. 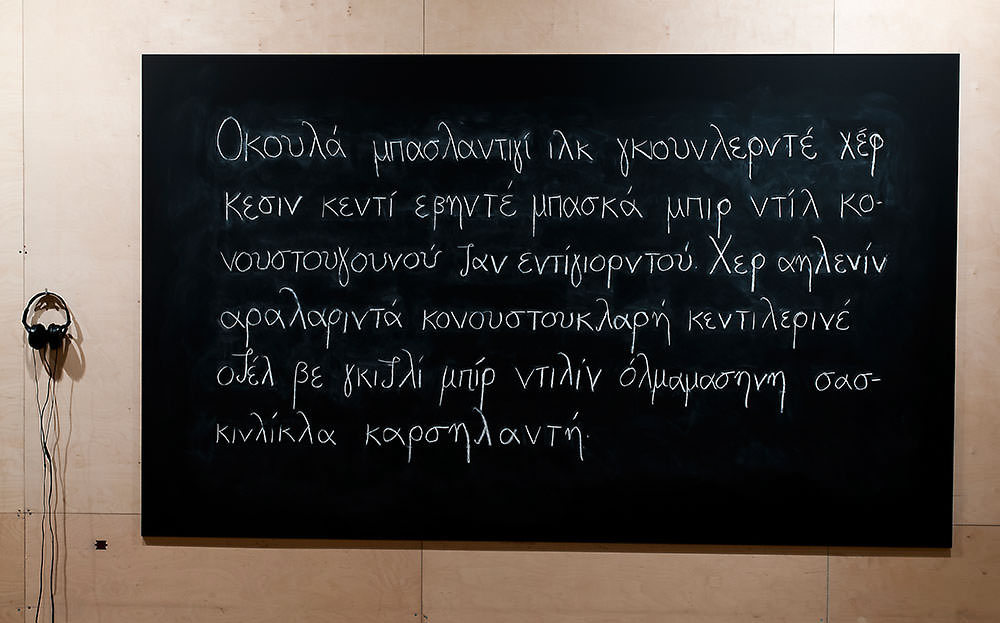 Armenian, Greek, Hebrew, Latin and Arabic languages were used by the multi-lingual population of the Ottoman Empire up until the Alphabet Reform enforced the use of the Latin alphabet in 1928. 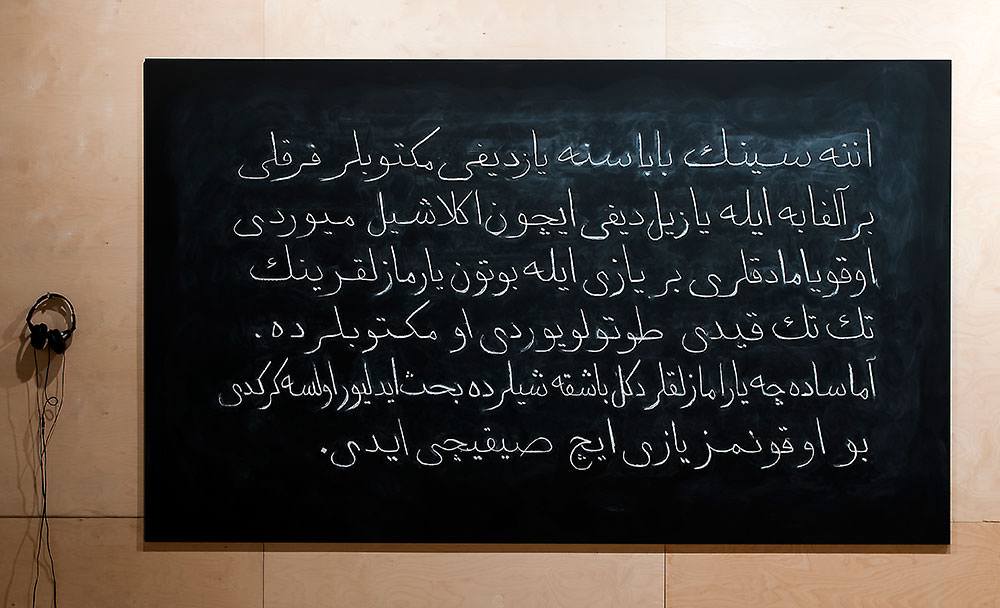 Winchester's "as if nothing has ever been said before us" takes its title from Oğuz Atay's novel "Tutunamayanlar." On display at SALT Beyoğlu until May 24, the work's title is derived from the second half of this sentence by Atay: "We are knocking on your doors with an emotion and arrogance unparalleled in world history and without fear of seeming like those who are conceited and behave as if nothing has ever been said before them." Winchester transcribes this sentence phonetically in Turkish "but with letters from five alphabets: Armenian, Greek, Hebrew, Latin and Arabic, which were used by the multi-lingual population of the Ottoman Empire up until the Alphabet Reform enforced the use of the Latin alphabet in 1928."

Born in 1974 in Istanbul, Winchester studied painting at Central St. Martin's College of Art and Design where she got her degree in 1998, before studying art, design, and new media at the London Metropolitan University. Winchester's works have been shown in numerous international exhibitions, including Tarjama/Translation, The Herbert F. Johnson Museum of Art, Cornell University in 2010 and Queens Museum of Art, New York in 2009.

For her video "Alphabets (Armeno-Turkish)" Winchester has interviewed Boghos Levon Zekiyan, Mehmet Fatih Uslu, Murat Cankara, Püzant Akbaş and Rober Koptaş. They talk about "the history and the symbolic value of the Armenian alphabet, the books written in Turkish with the Armenian alphabet, the multilingual subject of the Ottoman Empire in the 19th century, and the building of a literary canon." Winchester's second video, "Alphabets [Karamanlidika]" features interviews with Stefo Benlisoy and Şehnaz Şişmanoğlu about Turkish books written with the Greek alphabet. 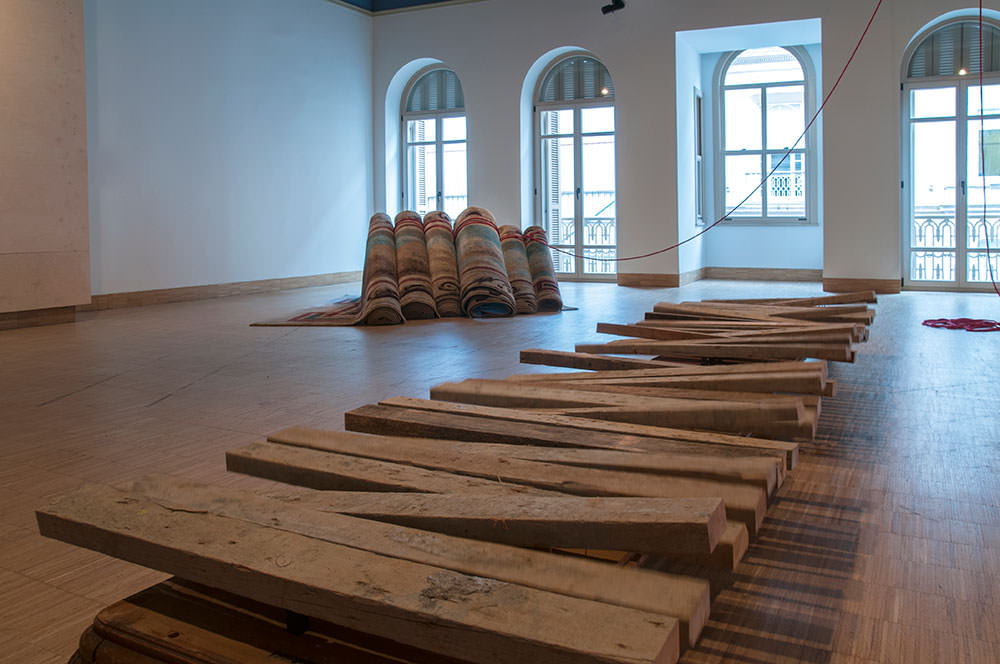 Equally impressive is Winchester's blackboards where she presents texts written in Armenian, Greek and Arabic alphabets. Headphones placed next to the blackboards provide viewers with a chance to hear their texts. The first text is written in Armenian alphabet: "Their neighbor's daughter was the first friend he ever remembered having. She was a few years older than him. When she was at school, he was bored because he couldn't find anyone to play with. When he started school, he realized that he wasn't taught the same letters. He still remembers how disappointed he felt then."

Winchester's second blackboard features a text written in Arabic alphabet. Those sentences show a similar sense of cultural and linguistic anxiety: "The letters that her mother wrote to her father were unreadable because they were written with a different alphabet. All the mischief they got up to was recorded with indecipherable writing in those letters. But surely, not only the mischief, there must have been other things mentioned as well. This indecipherable writing was annoying."

Finally, we get a blackboard featuring a text written in Greek alphabet: "On his first days to school, he assumed everyone spoke a different language at home. He was surprised to find out that not all families had a special and secret language of their own, which they only spoke within the family."

Seeing Winchester's works I was reminded of the "danger" of hybridity that the newspaper ad warned us against not so long ago. It seemed as if the real danger had been the standardization of the mess that was Ottoman culture which, almost a century after the empire came to an end, survives through these subtle and thoughtful artistic works.
Last Update: Apr 18, 2015 3:10 pm
RELATED TOPICS