In ‘They,' İpek Duben explores prejudices against ‘others' 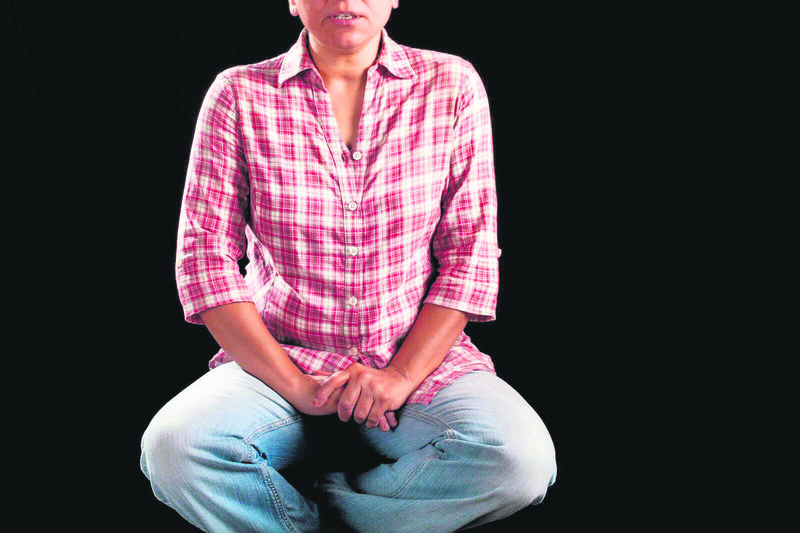 "Hell is other people," mused French philosopher Jean-Paul Sartre in a widely misunderstood line from his one-act play "No Exit." Sartre later explained what he meant by those words: "If relations with someone else are twisted, vitiated, then that other person can only be hell. Why? Because when we think about ourselves, when we try to know ourselves, we use the knowledge of us which other people already have. We judge ourselves with the means other people have and have given us for judging ourselves. Into whatever I say about myself someone else's judgment always enters. Into whatever I feel within myself someone else's judgment enters."

I remembered Sartre's words about self-knowledge and prejudices, while walking down the stairs of SALT Galata to see İpek's Duben's multi-screen video installation "They," on view there until June 28.

Darkness is the first thing you see upon entering the hall that hosts "They." I don't remember visiting a "darker" exhibition - since they are not allowed to take pictures inside, visitors walk into the pitch-dark entrance where they can't use screens of their phones to see whether they are alone or surrounded by strangers.

This must be intentional since Duben's powerful video-installation questions exactly that: our ideas, prejudices and fears of "They," whoever that may be. Presenting video interviews with 24 interviewees who come from different ethnic origins, belief systems and sexual orientations, "They" presents us with touching stories of discrimination and oppression about Armenians, women wearing head scarves, Jews, Kurds, Alevis, Zazas, Rums (Greeks), Romanis, LGBT individuals and women who experienced domestic violence.

The installation has two "zones," each containing a group of three projections as well as independently placed screens. "In each zone characters appear on screens, having a conversation in the presence of the audience around specific concerns such as racism, discrimination based on religion and beliefs, homophobia, gender inequality and domestic violence," according to the exhibition program. "The installation attempts to encourage dialogue between people who never, or rarely, have a chance to speak with each other. On the independent screens, each character recounts an unbroken monologue. A murmur of languages including Kurdish, Ladino, Armenian, Greek and Turkish, resonate in the background."

One of those voices belongs to Meryem İlayda Atlas, the Op-Ed editor of Daily Sabah, who talks about the discrimination she suffered as a headscarf wearing woman from an early age. She describes how she was forced to change her clothing at university and about the power of patriarchy that oppresses women on both sides of the secular-pious divide. Her anecdotes about being looked down upon because of her public identity is echoed in another screen, where a young Armenian woman talks about her shattered dreams of becoming a public servant in the 1990s after learning about the secret discrimination against Turkey's Armenian citizens at the upper echelons of bureaucracy.

While other interviewees, including LGBT individuals and Kurdish men, talk about their experiences in separate screens, the design of the "zone" sections create a dialogue between those 24 interviewees, as if they are participating in a roundtable discussion.

Duben has degrees from the University of Chicago (M.A.), New York Studio School and Mimar Sinan University (Ph.D.). She has written numerous books on modern and contemporary art. Having participated in the British Museum's "Poetry and exile: contemporary art from the Middle East" exhibition last year Duben exhibited her work at the 13th Istanbul Biennial in 2013 and at Istanbul Modern and The National Museum of Women in the Arts.

I asked Duben why she chose to focus on the subject of "They." "I've been engaged in identity issues since the beginning of 1980s starting with my first show 'Şerife' in 1981," she told me.

"'Şerife' was an iconographic image of Turkish women. In 'What is a Turk?', a postcard and video installation that I showed in 2003 and 2004, I focused on the western gaze's depiction of the Turk and Turkish culture throughout the twentieth century. This work was based on information taken from books and documents published by western authors about Turkey and Turks. 'What is a Turk?' is the precursor of 'They', a video installation about the Other's view of its others. In other words, it is basically about how citizens of Turkey view those citizens that they identify as the Other defined in terms of ethnicity, religion and gender."

I asked Duben how she had approached her interviewees. "In a project based on information provided by selected subjects, it is crucial to establish confidence between the interviewer and the interviewees," she told me. Of her 24 participants only three knew Duben before. "The rest of the group were not only total strangers to me, they were also ethnically, geographically and socially quite distant from my social environment."

"The only way I could establish any contact with them was through friends and acquaintances who believed in my work and integrity and were willing to introduce me or put in a word of trust about me."

After contacting her interviewees, Duben asked them to look her up on the Internet and visit her website to have an idea about her professional background and the sincerity of her intentions.

"I told them to feel free to express their doubts and ask any question they may have about me, my project, my intentions and how I planned to put the final work to use," she explained. "I tried to make them understand that I respected them, accepted them for who they are, and that I would not abuse their trust..."

Duben knew that transforming her documentary material into art would involve making choices in various aspects of aesthetics, including "the visual quality of the image, its size, sound effects and synchronization of sound and the speed with which it travels, the quality of lighting in the installation space specific to create a particular environment, and the placement of image reflecting panels in relation to each other as well as their distribution in the geometry of the space..." She then created a space of complete darkness, "a homogenous atmospheric vacuum, an undefined universe."

Duben acknowledged that identity politics in Turkey have been coming to the fore in recent years and this has made it possible for her to actualize a project like "They."

"As this transformation is taking place, we are still witnessing manifestations of discrimination as the participants have expressed individually in real life situations. One essential change seems to have taken root by the way and that is the unquestionable rights of covered women."

Very few of her interviewees had yet seen the finished project, Duben told me. "Those who have told me that their attention has not faltered as they viewed and heard each other speak... Getting to know each other is raising their consciousness of each other's travails. The audience response so far seems to be similar."

Her conclusion and characterization of the public space as a 'human theatre' reminded me, again, of Sartre and his play about prejudices in human relationships. "People who have seen the installation have expressed great excitement and in a sense bewilderment at the reality of the human theater in Turkey," Duben said.
Last Update: May 01, 2015 9:08 pm
RELATED TOPICS