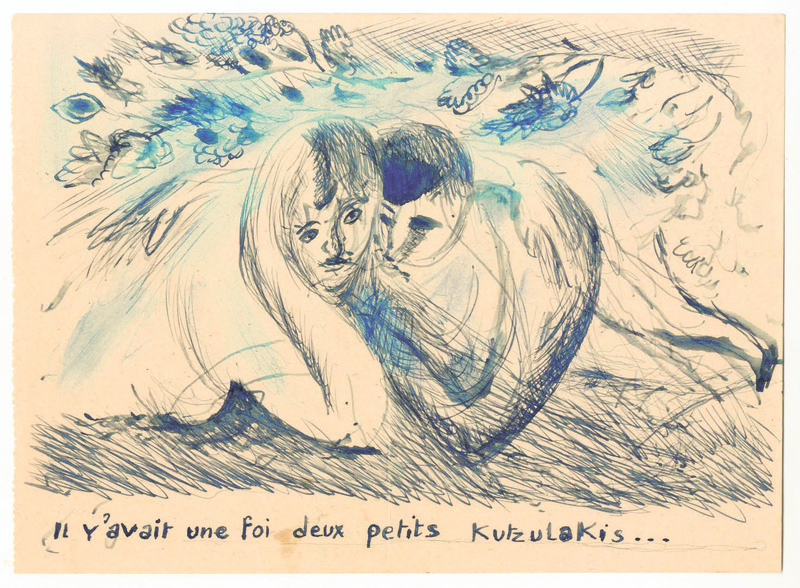 Turkish artist and poet Bedri Rahmi Eyüboğlu reflected his love, emotions and passion both on paper and canvas throughout his life. İş Sanat recently opened an exhibition where his and his contemporaries' letters, in which you can see some paintings as well, are on display

Bedri Rahmi Eyüboğlu transferred his passion for art, his loves, joy, sorrow and friends that he fit in his 64 years onto paper and canvas along with the naivety of Anatolia where he spent his childhood and youth.

Pomegranates, berries and quinces, which are featured in his paintings, and poems sometimes refer to his longing for a beloved one or sometimes to a cruel love. The artist learned about Western literature from his father and about Yunus Emre and Karacaoğlan from his mother. In his art, he drew the earth-sheltered homes of Anatolia, Istanbul's seagulls, bridges and sea as well as Aşık Veysel's saz.

While Eyüboğlu poured his inner world into his art and poetry, his conversations with the important figures of art, literature, politics and business shed light to the period he lived in. The letters mirror many sections of the artist's life, including his education that began at the Istanbul Academy of Fine Arts and continued in Paris, as well as his travels throughout Anatolia, and they follow his passion for painting. The letters have come to light for the first time at İş Sanat Kibele Gallery in "The Letters from Bedri Rahmi Eyüboğlu and His Contemporaries: We Used to Write Letters" exhibition. The exhibition takes place parallel to a project that is collecting hundreds of letters written or received by the artist into a book following many months of work by İş Bankası Culture Publications. The book was prepared by Hughette Eyüboğlu, the artist's daughter-in-law, and edited by Rûken Kızıler. The exhibition was designed by Emre Senan.

The letters, which feature countless memories from the days when Eyüboğlu was a student in Ankara and a teacher at the Academy of Fine Arts, are introduced to visitors with the statements and the signatures of their original owners. The letters of Eyüboğlu, who left lasting works in painting, poetry, sculpting, mosaics, ceramics, stained glass and calligraphy as well as a teacher and author, reveal the strong bond between artists of the period. Each letter provides historical evidence and gives visitors an idea about the financial difficulties that the artists experienced. The letters suggest that these people were able to note down their ideals despite the hardships they experienced and never lost hope.

A section of the exhibition is reserved for the two women who shaped the life of Eyüboğlu: One is his wife, painter Eren Eyüboğlu, and the other his "black mulberry," Mari Gerekmezyan, whom he fell in love with. While Eren Eyüboğlu was strong enough to hold his husband's hand and help him focus on painting after the death of his lover died, Gerekmezyan was the woman who made the artist fall deeply in love with her and made him cry even after her death.

Eyüboğlu's story began in Trabzon. He was born in 1911 as the second child of Görele District Governor Mehmet Rahmi Bey and Lüftiye Hanım. Although his birth name was Ali Bedrettin, it changed from Bedir to Bedri over

time. His talent was discovered by his art teacher in high school, well-known painter Zeki Kocamemi, while they were living in Trabzon due to his father's position. The artist also took interest in literature and wrote his first poems in high school.

Eyüboğlu enrolled in the Istanbul Academy of Fine Arts in 1926 and was lucky to be the student of the touchstones of the Turkish painting scene such as Nazmi Ziya and İbrahim Çallı. He focused on his interest in literature and took aesthetic and mythology lessons from Ahmet Haşim. In the 1930s, life dragged him to France. While he tried to improve his French by working in Dijon and Lyon, he copied the works of his favorite painters such as Gauguin, El Greco and Cezanne. The artist also met Ernestine Letoni whom he would later marry in France.

In the 1940s, Mari Gerekmezyan came into his life like "a knife with a black handle." Gerekmezyan came to the academy where Eyüboğlu was an assistant as a guest student and made an effigy of Eyüboğlu. In order to show his gratitude, the artist painted various portraits of her and wrote love poems to her. All of Istanbul including Eren Eyüboğlu was aware of their passionate love. Until his death in 1975, the artist spent a quarter of a century surrounded by love, painting, literature, his friends and prominent figures from culture and philosophy circles. The exhibition will run until June 20 and promises to leave an impression on Turkey's art and culture history. Besides original hand-written letters and envelops decorated with the artist's drawings, the exhibition also features portraits of Eyüboğlu's correspondences that were drawn by the artist himself. The visitors will also be able to write letters to their loved ones with papers and envelops decorated with similar drawings by Eyüboğlu.
Last Update: May 06, 2015 11:09 am
RELATED TOPICS