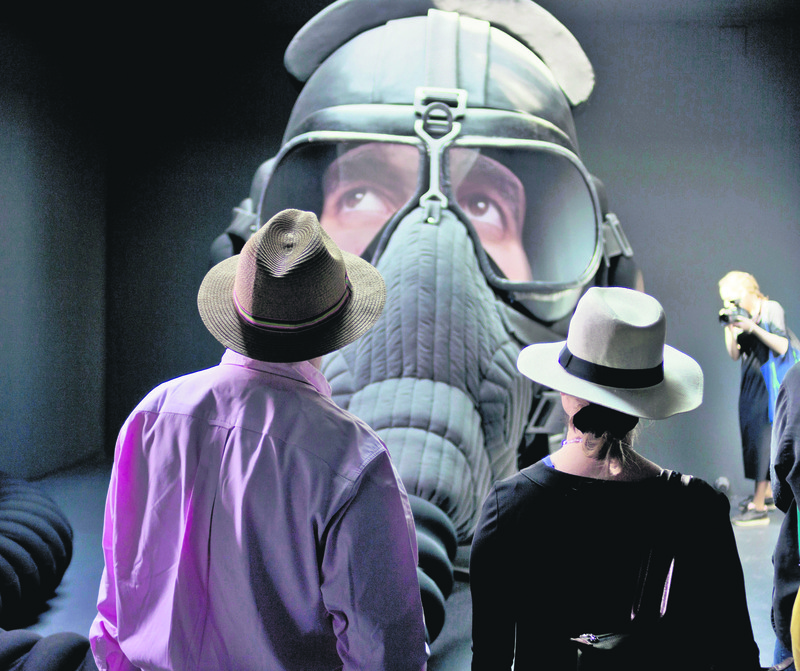 The contemporary art biennale, held once every two years, runs through Nov. 22 at the Giardini, Arsenale and locations throughout Venice.
by Associated Press May 11, 2015 12:00 am

The 56th edition of the Venice Biennale, one of the world's major contemporary art exhibitions, is being organized by an African curator for the first time and hosts a large number of female artists, suggesting that the art world is leaving its common biases behind

A Nigerian art critic and museum director is the first African to curate the Biennale contemporary art fair that opens Saturday for its seven-month run, while female artists are representing more countries than ever in national pavilions - trends seen as an informal rebalancing in the art world.

There's Joan Jonas for the United States, Fiona Hall for Australia, Irina Nakhova for Russia, Sarah Lucas for Great Britain, Chiharu Shiota for Japan, Pamela Rosenkranz for Switzerland and Camille Norment for Norway. And those women are all from the more established Biennale participants in the Giardini, around one-third of the 89 national pavilions. The prominence of women in the national pavilions - which along with the main show curated by Okwui Enwezor comprise the 56th International Art Exhibition - ay be coincidence. Still, the force of the female numbers is gaining notice as somehow tapping into a zeitgeist and challenging the notion of the art world as being male dominated.

"I think it is wonderful so many women are representing countries this year. I think it is great," Jonas said, sitting outside the U.S. pavilion - where she had just been approached by a woman who thanked her for giving hope to female artists.

Jonas, 78, received special mention by the jury Saturday for "an artist of significant oeuvre and influence," while the top honor Golden Lion for best national participation was awarded to the Republic of Armenia for its pavilion presenting works by the Armenian diaspora on the 100th anniversary of the mass killings of Armenians by Ottoman Turks. The Golden Lion for best artist in the international exhibit went to U.S. artist Adrian Piper, for her installation of hospitality desks inviting participants to commit to one of three rules, including "I will always be too expensive to buy." Jonas started her artistic career as a sculptor in the 1960s before moving into performance art and becoming an early adapter to video in the 1970s. She said that her participation in the Biennale would bring "a lot more attention to my work" - while adding that she always felt supported. "I am an artist's artist. From the very beginning, I had an audience. From the very beginning, I felt appreciated," she said. "I couldn't continue to work like this if I didn't have the support of my fellow artists, and then many curators, over the years."

Her show, titled "They Come to Us Without a Word," comprises four galleries with thematic compositions of video installations, prints and objects that explore natural phenomena taking inspiration from passages by Icelandic writer Halldor Laxness. The pavilion's central rotunda provides the theater for a fifth gallery, a study of light and reflection featuring Murano-made mirrors and a crystal chandelier. At the brand new Australian pavilion, the first new building in Venice in 20 years, Hall's show is its own natural history museum - a comment on colonialism and capitalism made through galleries of driftwood taxidermy collected from New Zealand beaches, hanging grass masks with scraps of camouflage, and a collection of rare and extinct animals woven from desert grass and other materials according to Aboriginal tradition.

"I've been very aware of carrying the Australian banner. And Australia wants to pass muster," Hall said, while also musing that 50 years ago there would have been few women at the Biennale.

At the nearby Arsenale, which hosts part of the main group exhibition, Nigerian-born Enwezor does not play up being the first African curator at the Biennale. His career has focused more on periods, namely art of the 20th and 21st centuries, than geographies. His show, "All the World's Futures," is globally inclusive with artists from 53 nations, with no attempt to represent African art as such. Enwezor has curated at least five other major international group shows, including documenta in Germany, and founded a journal of contemporary African art. Since 2011, he has been director of Haus der Kunst in Munich. He said he has spent his 25-year career "working with artists across every cultural context. I am interested in their ideas and concepts, whether they are Indian, African, European, Asian, whatever. In that sense it is quite unremarkable." On the other hand, he conceded that the Biennale "for better or for worse is an exclusive club," noting that "not that many female curators" had been tapped in its 120-year history. "To be part of this historical trajectory, to be part of an important aspect of our discipline," he said, "that is deeply meaningful." Some of the African artists chosen to participate in Enwezor's Biennale touted its significance. "I grew up in Malawi," said artist Samson Kambalu. "For me this is the first African curator, and the first time ever the world is looking at African art on an equal level." The contemporary art Biennale, held once every two years, runs through Nov. 22 at the Giardini, Arsenale and locations throughout Venice.
Last Update: May 11, 2015 10:44 pm
RELATED TOPICS