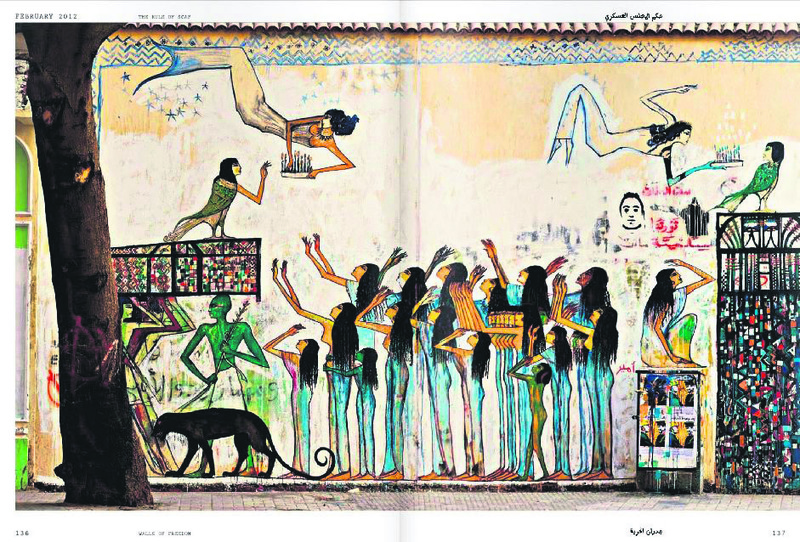 Egyptian artists increasingly criticize the lack of artistic creativity and freedom of expression under the current regime, which poses systematic threats to fundamental human rights

Mired in unrest since the 2013 military coup, Egypt dropped a bombshell on the world with the recent court verdict that sentenced the country's first democratically-elected president, Mohammed Morsi, and more than 100 others, to death over a mass jail break. The death penalty has been harshly denounced by international institutions like the U.N., as well as other countries including the U.S. and Turkey.

In the midst of the political chaos, artistic creativity and freedom of expression are tightly controlled and subjected to censorship under the current regime of Abdel-Fattah el-Sissi, who came to power following the coup. "It's difficult to gain permission to make a film. You have to go to the police ... It's not stable for us to create art and film. Or at least to do it in a free way," said Obada Khattab, an independent filmmaker and visual artist in an interview with Deutsche Welle.

The recent documentary by the Association for Freedom of Thought and Expression (AFTE) depicts the challenges of Egyptian artists, musicians and directors suffering from censorship and a lack of freedom of expression. "Public theaters are all controlled by the government," said Egyptian musician Rammy Essam. He said the government is against alternative art because there is always a message that they do not want the people to hear. Referred to as the bard of the Egyptian revolution by The New Yorker, Essam said Egyptian artists face many difficulties finding a place to display their work. One of the most prominent young filmmakers in Egyptian cinema, director Ahmad Abdalla, also shared his experiences on gaining approval from ministerial officials while making a film.

Another interviewee, Sayed Khattab, discussed how the revolution influenced Egypt with regards to the improvement of the arts. "The revolution unveiled many values within the artists and the youth ... We produced many movies during the revolution and those were the assets gained from the revolution. We need dialogue and relations between the artists and society," he said. Khattab, who is the former head of the censorship committee, said the most important thing for an artist is to reach people.

AFTE's documentary demonstrates that freedom of artistic expression, either as an individual or joint practice, has become a chronic problem in the country. The film further underscores the failure of legislation addressing these issues.

Graffiti art has also become a form of protest in Cairo and other cities after the fall of Hosni Mubarak, who ruled the country for almost 30 years. To take a stand against violence and oppression, young artists have created massive murals on street walls. Inspired by ancient cultural figures and the turbulent political atmosphere, the murals were a concrete urge for freedom and equality. Last year, the works of Egyptian artists were compiled in a book called "Walls of Freedom." Edited by Basma W. Hamdy, it features images of graffiti art that has appeared around the country since January 2011. Some months ago, however, certain international and Egyptian news stations reported that Egypt's customs services at the Port of Alexandria confiscated 400 copies of the book claiming it instigates public revolt. As stated on its website, "Walls of Freedom" not only broadly contextualizes the graffiti of the revolution but it also examines the historical, socio-political and cultural effects that have shaped the movement. An earlier article featured on the Index on Censorship, an international organization that promotes freedom of expression, said, "Several established street artists have chosen to remain anonymous, signing their artworks using nicknames for the sake of their security."

Although U.N. resolutions describe the notion of culture as an important factor in the fight against poverty and for providing economic growth, many Egyptian artists are criticizing the lack of necessary cultural initiatives provided by the government, including a free and open environment for them to practice their art.

While many young Egyptians envisage a better future through art, their works are also an illustration of a divided county that continues to suffer from the struggle between el-Sissi and Morsi supporters. Bearing the continuous calls of international organizations and nongovernmental organizations in mind, Egypt's human rights record will continue to come under scrutiny with a particular focus on artistic expression.
Last Update: May 24, 2015 9:19 pm
RELATED TOPICS