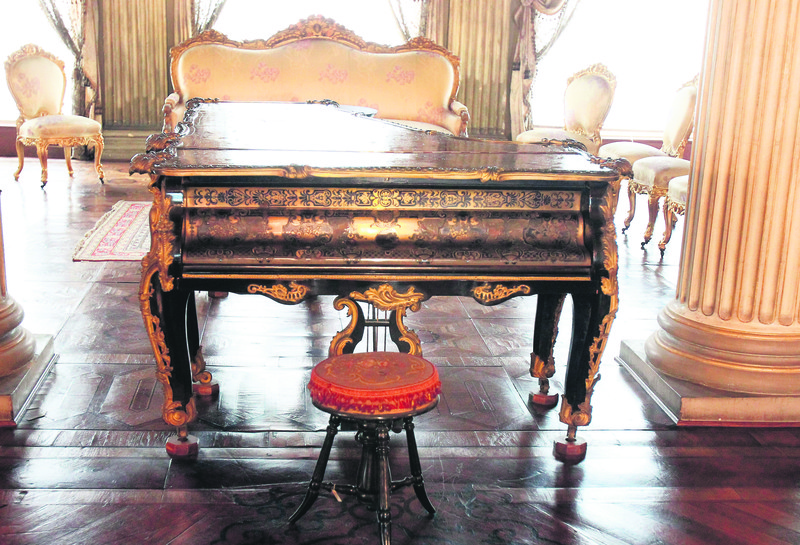 The wives of the sultans, who were also called ,ikbal,, took piano lessons in the palace. This was the reality toward the end of the empire. There were many pianos and none of them were inactive.
by Anadolu Agency May 27, 2015 12:00 am

Brought to Dolmabahçe Palace right after its opening ceremony in 1856, 12 pianos that reflect the glory of the Tanzimat era -when the arts experienced a bright trend in the Ottoman Empire- are waiting for visitors in the palace 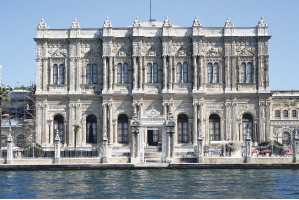 Dolmabahçe Palace, which is affiliated with the Parliamentary Office of the Secretary-General of National Palaces, hosted nearly 1 million visitors last year in the mansions and pavilions in the complex. Aside from the glorious, historical main building, the musical instruments on display, especially 12 pianos, also attract visitors.

Offering information about the musical instruments and pianos featured in the palace to an Anadolu Agency (AA) reporter, National Palaces guide Osman Nihat Bişgin said: "It is possible to see all the architectural features of the Tanzimat era in Dolmabahçe Palace. This period of Europeanization and Westernization led Western music to take its place in Dolmabahçe Palace," he said.

Bişgin said there are 12 pianos in the palace and all of them suit the harmony and glory of the building with their ornamentation. Dolmabahçe Palace opened in 1856 and the pianos were brought there following its opening ceremony. The wives of the sultans, who were also called "ikbal," took piano lessons in the palace. "This was the reality toward the end of the empire. There were many pianos and none of them was inactive. They were all played," Bişgin said. Most of the pianos in Dolmabahçe Palace are Hertz, Pleyel, Gaveau and Erard pianos with a few grand pianos among them.

Bişgin drew attention to the magnificent green piano in Zülvecheyn Hall and said it is a classic Pleyel palace piano. "As glory and magnificence were at the forefront in the palace, the palace pianos capture our attention as visual objects. Their sounds are not famous. For example, the French Pleyel piano is important not for its sound, but for its appearance. This piano is famous for its visual features," he said.

Bişgin explained that Zülvecheyn Hall is ornamented with gold plating on a white and beige ceiling and said the piano is in perfect harmony with the ceiling's decor. He said every object and piece of furniture in Dolmabahçe Palace is in its original place. "We can say that these pianos belong to these rooms. The pianos in Zülvecheyn and Süfera Halls were designed exclusively for their rooms and they were brought to the palace not for playing, but for enriching the atmosphere and decor of the rooms." 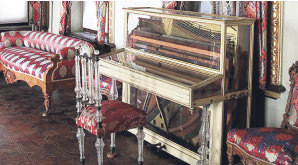 Bişgin also told AA about the rare crystal piano inside the Glassed Mansion. "This mansion is a huge place that hides much within its walls. Its doors were not always open to the outside world and it has been able to protect its authentic features," he said, adding Mustafa Kemal Atatürk, the founder of the Turkish Republic, saluted the people from the Glassed Mansion while he lived at Dolmabahçe Palace. Bişgin compared the mansion to a winter garden. "There is a place outside the mansion that is covered by glass. The crystal piano that is located in this glass-covered area is in absolute harmony with the surroundings," he said. The crystal piano was made by Paris-based Gaveau. Due to its transparent structure, its internal mechanisms can be clearly seen from the outside. "The piano stool was also made from crystal," Bişgin added.

Highlighting that French-made pianos give more importance to appearance than to sound, Bişgin said: "Not all the pianos in the halls were played. No wonder that the most played pianos of the place were those that were placed in the harem. The wives of the sultans both practiced on these pianos and performed on them."

The modest-looking black German-made Steinway, located in a room filled with musical instrum

ents, stands out for its musical quality. Explaining that it is a very valuable piano Bişgin said: "It is a Hamburg Steinway made in 1912. The factory that produced this piano was later moved to the U.S. There were only five Steinway pianos produced in Germany." He said the piano is estimated to be worth 200,000 euros, and it also features the insignia of Sultan Abdülmecid I. "This was used by a person who had a good ear for music," Bişgin claimed.

Bişgin also discussed the piano in Süfera Hall, which was used to host ambassadors during the Ottoman period. " 'Süfera' is the plural of 'Sefir,' meaning ambassador. In a way, this place was designed to address other countries," Bişgin explained. Most of the room's objects and furniture as well as the ceiling are gold-plated. A boulle piano was placed in the room in order to emphasize the harmony of the metal and gold plating. "This is a piano whose metal structure was installed inside its wooden parts. You draw a motif on the wood before carving it and place metal that's the exact same size on it," he said. Bişgin said boulle pianos have a hoarse tone, but are great for decoration.
Last Update: May 27, 2015 10:02 pm
RELATED TOPICS