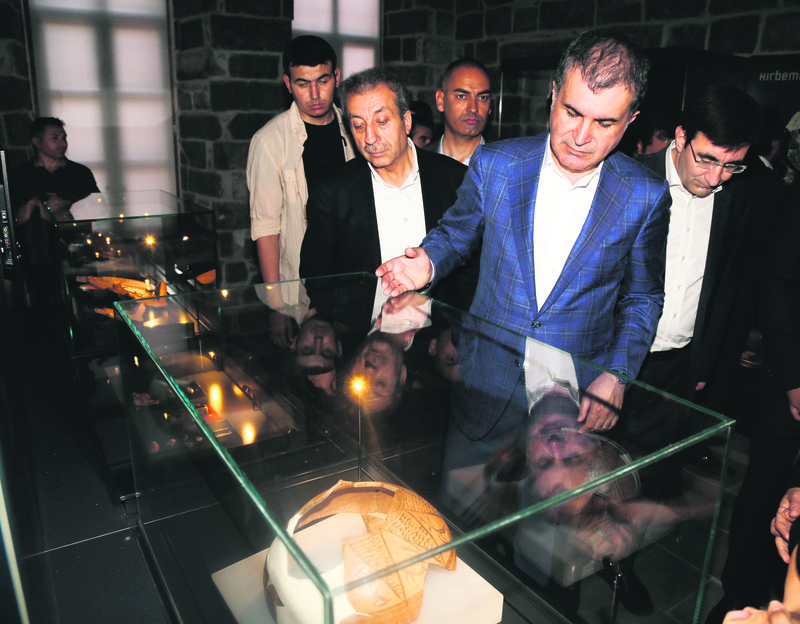 by Anadolu Agency May 27, 2015 12:00 am
The historical İçkale Museum Complex in Diyarbakır, which was restored as part of the Development Ministry's Center of Attraction Supporting Program under the auspices of the Culture and Tourism Ministry, was opened recently with a ceremony.

In his speech during the opening ceremony, Culture and Tourism Minister Ömer Çelik expressed his excitement at being present at the opening of such a building. "The most important contribution of the governments of the ruling party to Diyarbakır is its cultural life. The soul that brings Diyarbakır into existence is to put an end to the resistance, denial, and assimilation politics that were carried out by certain oligarchic groups within the state in order to destroy the cultural identity of our Kurdish brothers. We have taken Kurdish identity under protection and showed it all the encouragement we have for the development of this identity," Çelik said.

He also touched on the attacks by the Islamic State of Iraq and al-Sham (ISIS): "ISIS is a terrorist organization that is a curse on humanity. They took hold the ancient city of Palmyra [in Syria] and they are threatening the heritage of humanity." He said they are sending a message to the world from Diyarbakır by protecting historical buildings from churches to mosques belonging to the Artuqids up to recent artifacts and buildings. "This is the real message that Muslims give to the world," he said and stressed that such a terrorist organization cannot be Muslim as they have destroyed historical artifacts and the heritage of humanity as well as inflicting cruelty in Iraq and Syria.

He said those who lack knowledge say Anatolian culture belongs to the Turks while Mesopotamian culture belongs to the Kurds. "This is separatism in people's minds," he said, adding both the Anatolian and Mesopotamian cultures bring common value to Turks and Kurds. He went on: "We are aware that each cultural heritage we handle is a contribution to humanity. Therefore, we are working hard for the Walls of Diyarbakır and Hevsel Gardens to be listed on the UNESCO World Heritage List." He said that experts thought the application files were excellent and that he expects these two cultural and historical treasures to make it onto UNESCO's World Heritage List during a meeting that will take place either at the end of June or the beginning of July.

He said that the ministry is preparing a new strategy for the promotion of Diyarbakır by increasing the amount of advertisements for Diyarbakır. "God willing, we will put this new strategy into practice within two months," he said, adding that they will be able to reach the targeted number of tourists.

Development Minister Cevdet Yılmaz underscored that Diyarbakır is a province that used to know how to shelter different people under one roof. He said people belonging to different religions, beliefs and ethnicities have been living in Diyarbakır for centuries. He also mentioned the reconciliation process and said only strong governments can conclude the reconciliation process and improve the economy. "This project shows us that those who can make it out in difficult situations are strong leaderships and governments," Yılmaz said.

Following the speeches, the ministers conducted the opening ceremony of the İçkale Museum Complex, which is the first settlement site of Diyarbakır and also the center of government back then. After the ceremony, the ministers visited the Thematic Works Exhibition Hall in the gendarmerie building, Diyarbakır Prison's museum storage and laboratory, the St. George Church Art Gallery and the new museum complex that will replace the former army corps building.
RELATED TOPICS