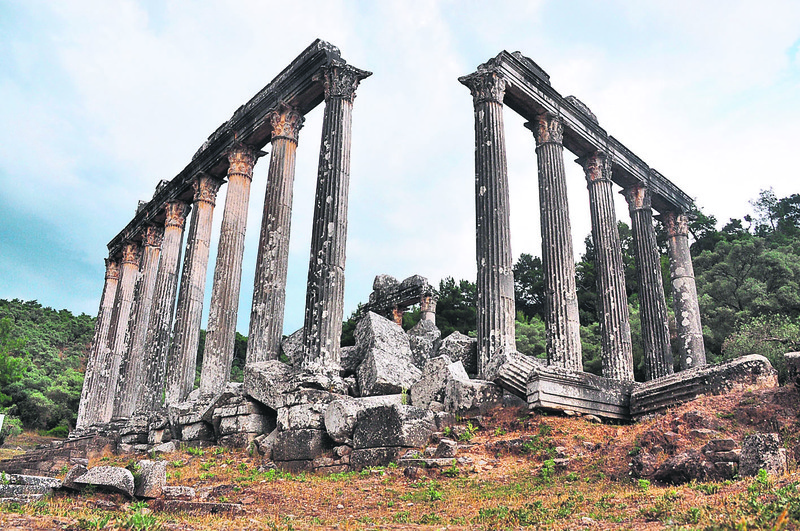 by Anadolu Agency Jun 06, 2015 12:00 am
To better coordinate the excavations in the ancient city of Euromos situated near the Milas district of Muğla, a special house will be open soon for the archaeological team. Speaking to Anadolu Agency, Assistant Professor Abuzer Kızıl of the Muğla Sıtkı Koçman University Archaeology Department and also the head of the excavations, said that the excavations in the ancient city of Euromos, which was founded in the second century B.C., started 36 years earlier. In recent years the excavation team has carried out geophysical studies, excavations, mapping, cleaning and have opened culverts. The activities are currently focused on the Temple of Zeus, ancient theater, necropolis, bathhouse, city walls and agora.

He said dedicated housing, storage and workspace is needed in order to properly conduct the ongoing excavations. Upon a field visit by Abdullah Kocapınar, the general manager of the General Directorate of Culture Heritage and Museums, a project was initiated to build a center in Euromos under the commission of Culture Minister Ömer Çelik. Kızıl said the excavations will restart soon in the area after a break. "A well-equipped building is a priority to successfully conduct excavations. So far, our team has stayed in a dormitory of the Milas National Education Directorate," he said. The team can stay in the dormitory only during specified periods and thereby has to work hard for a whole month in summer. "When the house is completed, the excavations will continue for between five and six months. The construction team is working to make it ready for the summer season," he continued. Spreading across an area of 700 square meters, the building has cost a of TL 300,000 ($11,250). The archaeological team will stay in the house, which will have study rooms, a kitchen and resting rooms. Kızıl said the house will accommodate 50 people.

In recent years, the ancient city of Euromos gained popularity from the excavations carried out on its agora, theater and necropolis. Currently, the necropolis is open to visitors. Kızıl spoke of the Temple of Zeus, one of the best-preserved temples in Anatolia, built in the second century B.C.: "There are 16 pillars of the temple, which had 17, still standing. The archaeological team is planning to realize important projects there. There are many well-preserved architectural ruins," he said. Last year a marble chair belonging to one of a nobleman was found near the ancient theater. "Under a two-meter fill, we discovered a 2,200-year-old chair. This year the excavations will continue in the same area," he said. The research team also carried out a topographic survey and geophysical studies, which form an important aspect of the excavations.
Last Update: Jun 06, 2015 1:57 am
RELATED TOPICS