‘All That Is Solid' stands in museum's yard 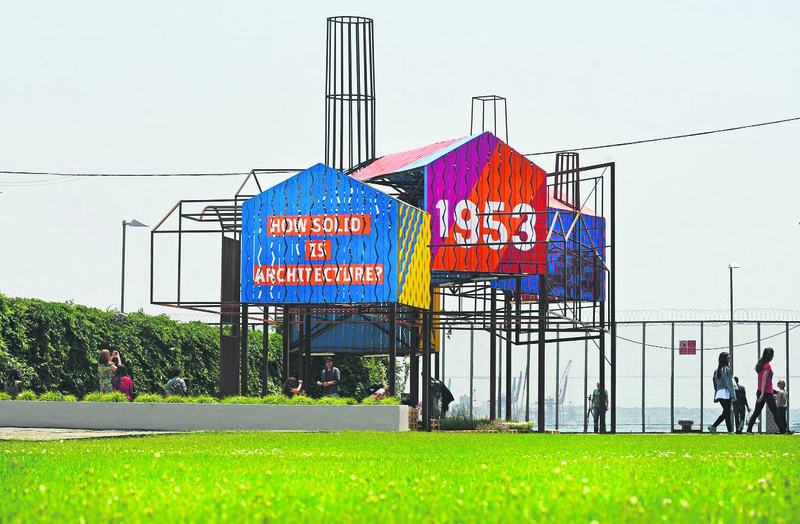 Istanbul Modern is currently hosting an open-air architectural exhibition that is inspired by the industrial history of the museum's location, offering a vision from the past and a critical approach towards future. The exhibition will continue until Nov. 15

In partnership with the Museum of Modern Art (MoMA) and MoMA PS1, Istanbul Modern opened "All That is Solid," the second temporary installation of the Istanbul Modern: Young Architects Program (YAP), and the international YAP 2014-2015 Finalists exhibition on June 9.

"All That is Solid" was designed by Cem Kozar and Işıl Ünal of PATTU Architecture, and Metal Yapı supported its engineering and construction process. The installation was designed by borrowing geometric forms of past buildings that once stood in the area where Istanbul Modern is presently located, and crunching them together in a chaotic way. Until Nov. 15, it will also be used for the museum's events, particularly youth programs.

The installation was among the five finalist architectural projects and was chosen by a jury committee chaired by Professor Süha Özkan along with architecture experts and representatives from Istanbul Modern and other YAP International partners. "All That is Solid" is not only inspired from the area's industrial history, but also remembers the past and suggests viewers look at the future in a critical way.

Designers and architects invited to the YAP program are encouraged to introduce ecological solutions in the fields of sustainability and recycling, and reuse or create innovative architectural designs that will increase the use of open-air spaces. These creative designs, which can then turn into popular urban spaces for summer months, are expected to protect visitors from the summer heat, host different events and create intimate social spaces for residents. However, the designers are also expected to complete it with reasonable financial and architecture solutions. Until Aug. 2, a temporary exhibition curated by the YAP Istanbul Modern program coordinators Çelenk Bafra and Pelin Derviş will be on display. It showcases models, visual images and videos of the projects of the finalist invited to the program by Turkey and other international partner institutions in 2014 and 2015.

Architecture's sustainability and durability over time

Istanbul Modern Chairwoman Oya Eczacıbaşı said in a statement that Istanbul Modern entered into a long-term collaboration with MoMa and MoMa PS1, the world's leading contemporary museum, in 2012. She said the YAP program is Istanbul Modern's first large-scale project in the field of architecture and is an ongoing initiative. "Istanbul Modern, as a pioneer of culture and the arts, contributes to international awareness and appreciation of contemporary art in Turkey, while continuing its collaborations with global art institutions since its foundation. The long-term collaboration between MoMa and MoMa PS1 makes Istanbul Modern an important part of an international network in architecture. It is highly valuable for us to realize the YAP program, which MoMa founded in 1998, in Turkey with an expert team. I believe it will make a striking and innovative contribution to the present architectural environment," Eczacıbaşı said. She said the designs of Turkish architects included in this program are on display at international exhibitions organized by YAP program partners. Eczacıbaşı also stressed that YAP will create a social gathering for architecture, design and the arts through temporary installations established every two years. Throughout the summer, there will be music, performances and film sessions at Istanbul Modern's garden free of charge. "'All That is Solid' will host dance, art and concert performances, workshops, open-air film sessions and panel discussions from different fields where viewers will take an active part. The first event will be 'Yoko Ono Morning Peace 2015,' a collaborative event with MoMA PopRally during which visitors will celebrate June 21, the longest day of the year, with music, yoga and artistic activities," she said. 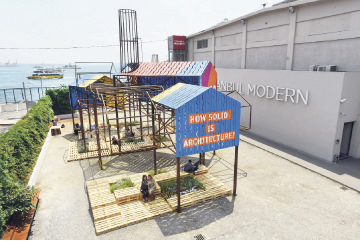 Süha Özkan, the president of the jury, said the PATTU proposal was inspired by the industrial, psychological and social history of the area, which is called Galaport. He said what makes the proposal interesting for people of all ages and social backgrounds, is that it allows them to understand, experience and discover the engaging history of the area. "The visual documentation of the area revealed a number of historical city formations. The proposal is a site-specific project, as it depicts building components and collects them into abstract forms. The assembling of the features of the buildings that once existed in the area, establishes a connection to its two-century-old urban history," he added. MoMa Curator Pedro Gadanho said PATTU's proposal introduces a poetic interpretation of the area's volatile history. He said the project is a multi-layered installation that reflects the soul of the YAP program. "The reimplementation of the famous idea that 'everything that is solid melts into air' not only creates a timely commentary on the politics of urban renewal, but also discusses architecture's sustainability and its durability over time," he said.

Istanbul Modern Curator Çelenk Bafra said in her statement that the design reflects the geometries of different buildings like the clock tower, car factory and warehouse that once existed in the area where Istanbul Modern currently stands and crunches them together to create new forms. She underlined that although the installation is temporary, it has an original and imaginary quality that blends with the past. Bafra said Istanbul Modern is situated in an area where the Bosporus reaches the center of the city and has been used as a port for centuries. Due to its location, the area was constantly changing in parallel with the city's turbulent history and has hosted many industrial, cultural and trade buildings. "The area around the museum might undergo a comprehensive transformation soon. YAP finalists try to address the program's main principles," she said. Bafra also said "All That is Solid" departs from archival research reflecting the area's interesting history. It offers an attitude toward the fate of the area awaiting transformation. "The project proposes more critical thinking about topical issues such as urban renewal, the sustainability of architecture and the impermanence of buildings. Furthermore, it features this attitude through colorful atmosphere, which was made by aluminum folding façades activated by light sensors and resting areas formed with wooden pallets in the shade of a metal-framed structure. The space turns into a kind of playground imagining the past and the future, while creating a place full of visual experiences waiting to be explored by the audience," Bafra said.
RELATED TOPICS