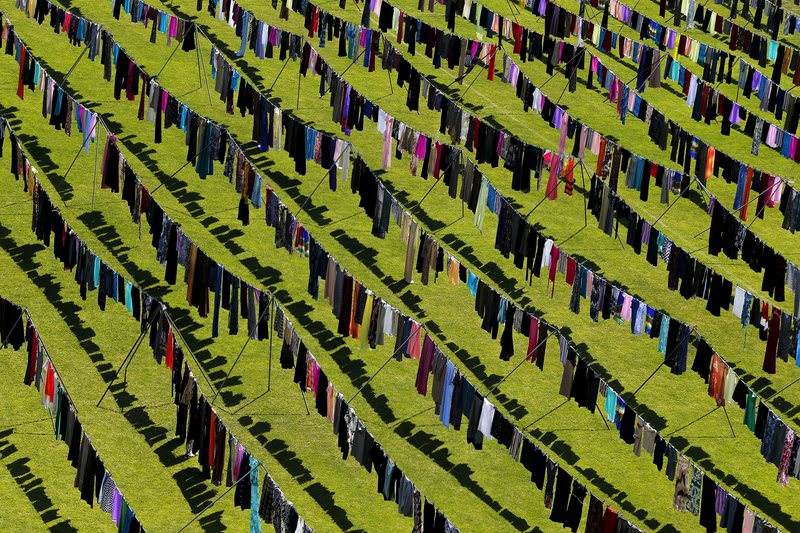 by Daily Sabah Jun 20, 2015 12:00 am
Conceptual artist Alketa Xhafa Mripa's latest exhibition, "Thinking of You," was opened on June 12 in Pristina, the capital of Kosovo. Featuring nearly 5,000 dresses and skirts displayed on 45 clotheslines on a football field, the exhibition uses these outfits to represent women and children who were sexually assaulted between 1998 and 1999 during the war in Kosovo. The artist displays her exhibition on a football field in order to draw attention to the scale of the violence.

Mripa left Kosovo for London right before the war broke out. When she began to read the stories of women who were sexually assaulted during the war, the idea of the exhibition formed. The artist decided to establish her exhibition around the metaphor of exposing the dirty laundry, however the dresses turned out to be the symbol of the support of the public for women who are still silent about what happened to them.

Mripa managed to collect all these dresses through donations. Some of the clothes came from women who were sexually assaulted or their relatives. One of the supporters of the exhibition is the first female president of Kosovo, Atifete Jahjaga. In one of her interviews, Jahjaga said she puts great importance to the exhibition in order to show women that there is no discrimination such as "we or them" when It comes to the victims of sexual assault. Although there are no official records, it is estimated that around 20,000 women were the victims of sexual assault during the war in Kosovo. However, the number of lawsuits filed for these crimes is negligible.
RELATED TOPICS