Turkish language around the world 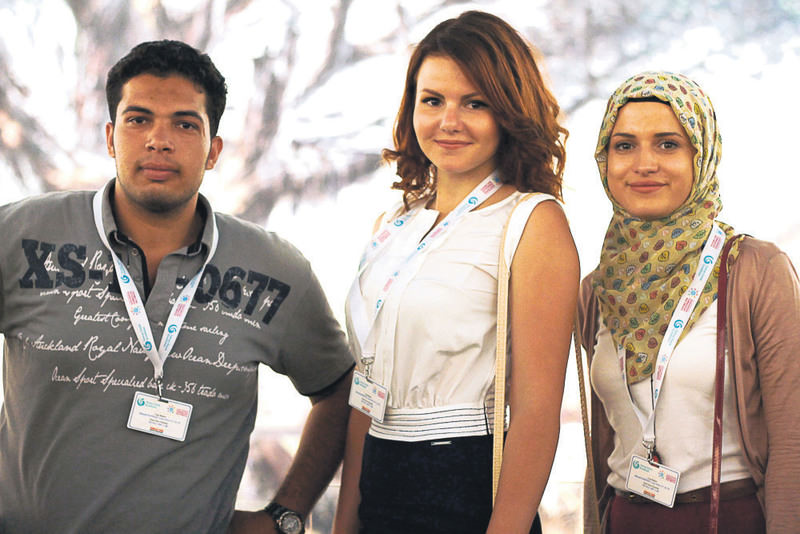 Ahmed Basem Elsayed Mahmoud, Egypt (l), Anna Shmyk, Ukraine (c) and Zehra Huduti (r), Kosovo, are brilliant students, all speak at least four different languages and have been chosen as among the best students from their universities.
by Asena E. Arıoğlu
Jul 24, 2015 12:00 am

The Yunus Emre Institute, founded in 2009, brings students from different cultures in Istanbul together with Turkish culture and language

The Yunus Emre Institute's vision is to build bridges between Turkey and other countries and to represent Turkey and its culture to the world usıng the right resources: the Turkish language, culture and arts courses and exchange programs. Its mission is to teach Turkish language and culture abroad, to create cultural spaces where people can get to know Turkish culture and to enhance Turkey's relations with the world. The name of the institute is inspired by the Turkish poet Yunus Emre, who contributed greatly to Turkish language and literature with his humane philosophy and indiscriminative approach.

Daily Sabah interviewed three students who are currently studying in İstanbul in the summer program at the Yunus Emre Institute. Anna Shmyk from Ukraine, Zehra Huduti from Kosovo and Ahmed Basem Elsayed Mahmoud from Egypt are brilliant students. They all speak at least four different languages and have been chosen as among the best students from their universities. Their Turkish is impressively advanced, and for this experience in İstanbul and their advanced Turkish they thank the Yunus Emre Institute and its president Hayati Develi. The institute is currently hosting 150 students from many countries, such as India, Albania, Hungary and Algeria, for the summer school. Anna said: "We are in İstanbul thanks to the exchange program of the Yunus Emre Institute. We are going to stay here for one-and-a-half months. We are really lucky to be in this beautiful city. Every day, we meet new people from around the world and build cultural bridges through the bond of friendship. To do that, we use Turkish, which is our common language. I hope we will be able to get the most out of this experience."

All three of them explained that their days are full of activities and courses. Ahmed described a usual day, saying: "The language course starts at 9:00 a.m. At 1:00 p.m. we have lunch, and then continue the course until 2:30 p.m. After that, people go back to their respective rooms and rest a bit. At night, we meet up again to chat and to do sports activities." He also added that the institute takes them around Istanbul.

Each of them explained how Turkey is viewed in their home countries. Anna said: "Before, Turkey wasn't well-known. But, now, with the expansion of tourism in Turkey, Ukrainians visit Turkey quite often. Also, the Turkish language is not spoken a lot in Ukraine, which puts Turkish-speaking people in high demand. This increases the number of students who want to study Turcology." Zehra, on the other hand, has a different view of Turkey due to the fact that Kosovo was once Ottoman territory. She said: "In my country, the best artifacts are the work of the Ottomans. For example, in Prizren, there is a huge bridge built by them. Also, in the same city, the second language is not English, but Turkish. Therefore, Turkey is viewed as a beautiful country in Kosovo. Moreover, Kosovo and Turkey have good political relations. During Ramadan, Turkish people send donations to my country, and many students come here to find jobs. The work done by the Yunus Emre Institute contributes a lot to this image of Turkey." Ahmed also said that Turkey had a good reputation in Egypt.

When it comes to the Turkish language, they all agree that it was a difficult language to learn, especially Anna and Ahmed, who are used to different alphabets. Zehra explained: "It was easier for me to learn because I am used to the Latin alphabet. Also, older people in Kosovo use some Turkish words left over from the Ottomans. For example, my grandfather still uses the word "pencere," which is the Turkish word for window, whereas I use "dritare" which is the Albanian word."

Even though he found the Turkish language to be different and difficult, Ahmed said that the culture in Turkey was quite similar to Egyptian culture. He added: "We even use the same proverbs, such as 'Dost kara günde belli olur' or 'Rüzgar ekersen, fırtına biçersin.' Also, Turkish culture and language were quite influenced by the Arabic language and culture. In Turkish, there are more than 5,000 words that originate from Arabic. Furthermore, many customs resemble ones we have. However, Turkey is much more advanced, much more civilized than Egypt. That is the one thing that I have noticed the most." Zehra was mostly impressed and shocked by old Turkish traditions rather than the present ones: "For example, in olden times, when a guest would arrive, she would be offered coffee and water. If she were to drink the coffee, that would mean she is full, if she were to drink the water, that would mean that she is hungry, then the hostess would offer her something to eat." Anna on the other hand, said that she was quite amazed by the cultural and geographic differences between cities. She added: "I studied in Erzurum for five months. Erzurum was really different from İstanbul in terms of culture. For example, at weddings in Erzurum, people were not offered food. Meanwhile, in Ankara and İstanbul, weddings are always accompanied by feasts." Anna also talked about Turkish TV series that are popular in Ukraine. "Like me, many Ukrainian people are fond of the Turkish series "Muhteşem Yüzyıl." This is mainly because Hürrem was Ukrainian. She was a strong woman. We knew about Ottoman history, but with this series, we have learned about it more in depth. Moreover, such Turkish series have helped me improve my Turkish a lot." In spite of the fact that all three of them have different opinions about the culture and the language, they mentioned "baklava," a famous Turkish desert, as their favorite food.

All of them have different plans for the future. Ahmed said: "Before starting university, I didn't like studying languages, but once I started learning Turkish, I loved the language. As it is said in Turkish 'bir dil bir insan, iki dil iki insan.' Before coming to İstanbul, I worked as a translator in various organizations and events. After I graduate, I want to get a master's degree. I hope I will do that in Turkey." Zehra explained her future plans, sayıng: "I have learned Persian, and now I am learning Turkish. After this I want to learn the Ottoman language. In the future, I can work as a translator or as a teacher. However, my main goal is to explore and discover Ottoman artifacts in my country. Due to the lack of people who can understand the Ottoman language, those historical treasures are not being explored and researched." Anna explained that she does not have any specific plans in the future. She added: "I would have liked to become a teacher, because teaching languages is an amazing experience, as it involves understanding the culture and history. Unfortunately, in Ukraine teachers are not well paid or respected. However, I definitely want to continue using Turkish in my business life. This is because I have worked in a Turkish company in a secretarial position, and it was a really nice experience for me. I find that Turkish people are easy to work with, as they are welcoming and friendly."

These students want to contribute to the future of Turkey, as well as to their own home countries. They see it as a peaceful way of building political, social and cultural relations. The Yunus Emre Institute seems to have contributed a lot in the forming of this view. Such institutes spreading cultures, languages and friendship are making this big world both smaller and more beautiful.
Last Update: Jul 25, 2015 2:17 pm