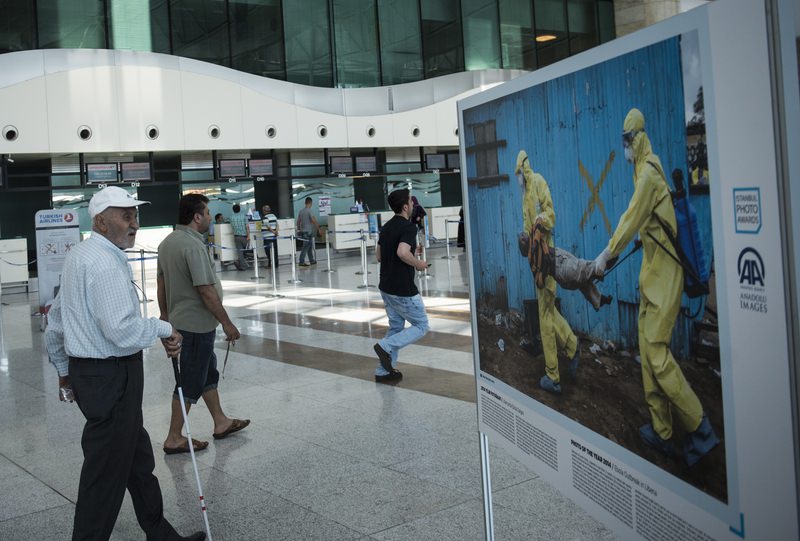 |AA Photo
by Anadolu Agency Jul 25, 2015 12:00 am
A gallery exhibition showcasing the award winning photographs from the recently-held international contest "Istanbul PhotoAwards" organized by Anadolu Agency has opened at the Ankara Esenboğa Airport on Saturday.

The exhibition will remain open until August 8.

The "Istanbul Photo Awards" was Turkey's first and only news photograph contest held at an international level. The contest received approximately 12,000 applications from 104 countries. Some of the award winning photographs also won more awards at other international contests, including the Pulitzer.

Daniel Berehulak's photograph from Liberia about the Ebola epidemic was named as "Photo of the Year" in the contest and is the most striking photograph in the exhibition.

The award winning photographs in the "Istanbul Photo Awards 2014" covered different aspects of global news events such as the civil war in Syria, the Ebola outbreak in Africa, Ukraine conflict, political crises, terrorist attacks and natural disasters around the world.

Byhangst Matthias' "Lionel Messi" photograph, which was the winner in the sports category, awaits for football fans at the exhibition. In the photograph, Argentine football star Messi can be seen competing with four opponents.

The gallery exhibition will move to Izmir after the show in Ankara. It will be displayed from August 11 to 25 at the Adnan Menderes Airport. Later, the photographs will go on display at the Shangai Center of Photography upon the invitation of one of the jury members, Liu Heung Shing.

Several prestigious professionals got to pick the best photographs in the contest.

The jury chose 11 photographers from seven countries as winners in four categories.

Winners of each category and the photo of the year were awarded $8,000; runners-up were given $3,000 and third-placed participants received $1,500 prize money.