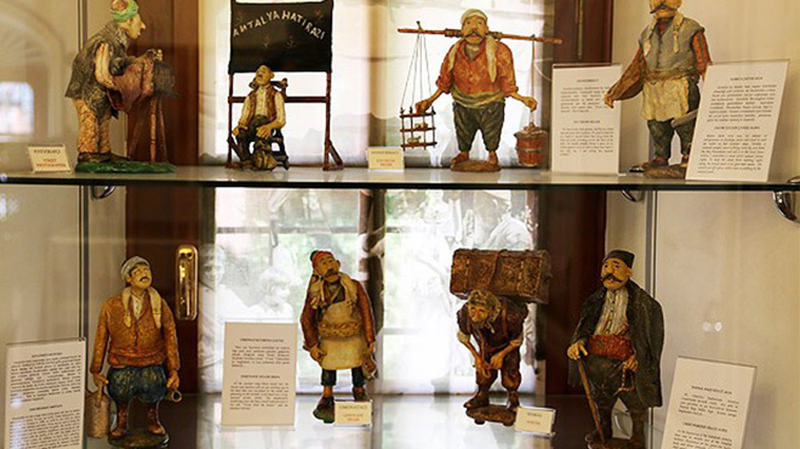 by Daily Sabah Aug 07, 2015 12:00 am
Curated by the Suna-İnan Kıraç Mediterranean Civilizations Research Institute, an exhibition featuring the bibelots and figurines of 19th century street vendors in the Ottoman Empire is being displayed in several European countries. The manager of the Mediterranean Civilizations Research Institute and Kaleiçi Museum, Kayhan Dötrlük, explained that street vendors are unknown to today's youth, but bibelots and figurines of such characters as as marble sellers, soup makers, oil sellers, lemonade makers, ice cream men, candle sellers, wood sellers and salep sellers are displayed the same exhibition. The display presents photographs of the vendors in the Ottoman Empire as well as from the early Republican era and the figurines are based on these photographs.

Speaking to Anadolu Agency (AA), Dörtlük said that although the Vehbi Koç Foundation, the Suna-İnan Kıraç Mediterranean Civilizations Research Institute and Kaleiçi Museum mainly focus on research, the institutes also work in accordance with the tourism potential and culture of the city. Saying that they host various exhibitions, Dörtlük said that they are curating an exhibition with an interesting concept through their "Street Vendors in 19th Century Turkey." He explained that they brought together the photographs and photo-carts of street vendors taken by the pioneer photographers of the 19th century and continued, "The exhibition draws huge attention abroad as the photographs featured in the exhibition are the first photographic examples from Ottoman regions. These photographs focus on street vendors, which reflect the social and cultural life of the time. We create a story by bringing these photographs together."

Dörtlük said that they created caricature ceramic figurines of street vendors with contributions from ceramic artist Sadrettin Savaş. "A magnificent collection has come into being. We showcased them both in Turkey and abroad. It drew great attention internationally," Dörtlük said. Explaining that the collection sheds light on Ottoman production, culture, food and beverages, daily lives as well as special occasions, their understanding of entertainment and holy concepts, Dörtlük said that the exhibition has been displayed in Italy and Germany. He said that the exhibition has welcomed a total of 12,000 visitors in the last two years.
RELATED TOPICS