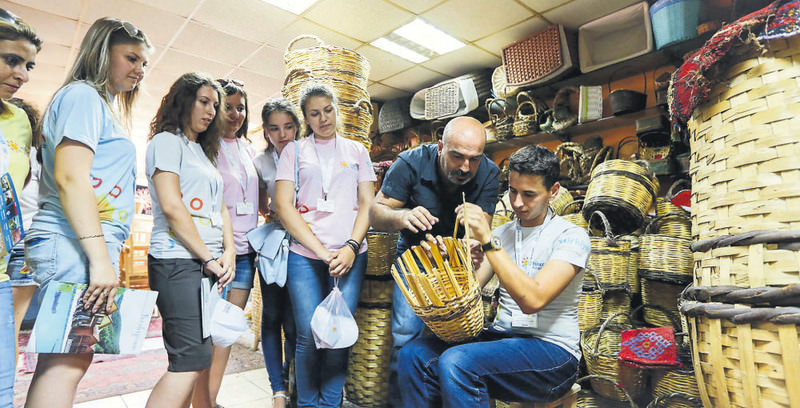 It would be rare to hear a Turk saying "Oh my Gosh" even if it is someone who speaks fluent English. People tend to give reactions or express feelings like excitement or surprise in their own language. It is also more common for people to speak English in international organizations. We would hear people greeting each other and having conversations in English at an event attended by people from different countries, for instance. However, we experienced a different atmosphere this weekend in Istanbul and Bursa, as the guests of the Yunus Emre Institute. It was quite surprising to hear people coming from 49 countries speaking, telling jokes and giving reactions in Turkish. 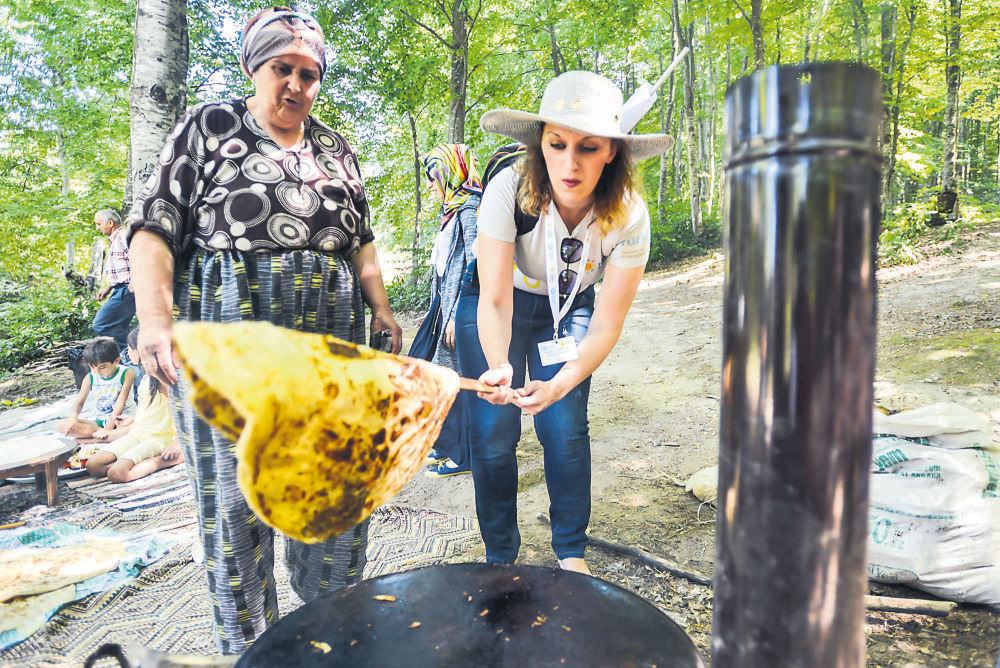 In this year's summer school, 500 students were spread out across 12 Turkish cities. They make baklava, weave baskets, hew walking sticks and forge copper.

Established in 2007, the Yunus Emre Institute conducts its activities under the umbrella of the Prime Ministry. The institute began opening cultural centers in different countries in 2009 with the main purpose to teach Turkish. The institute, which opened its first center in Bosnia-Herzegovina's capital Sarajevo, has 42 cultural centers in 34 different countries today. Students who receive Turkish language education have started coming to Turkey for summer programs over the last five years, which allows them to continue taking Turkish lessons as well as get to know Turkish culture.

They make baklava, weave baskets, hew walking sticks and forge copper. In this year's summer school, 500 students were spread out across 12 Turkish cities. While 130 students are hosted in Istanbul, 320 students are continuing their summer programs in Aydın, Bursa, Denizli, Eskişehir, Gaziantep, Kocaeli, Malatya, Nevşehir, Sakarya, Samsun and Zonguldak. They learn about Turkish arts and culture by practicing in the cities where they travel. Students in Istanbul have the highest level of Turkish, but each student who attends this program in Turkey as a reward of their success has a different story. 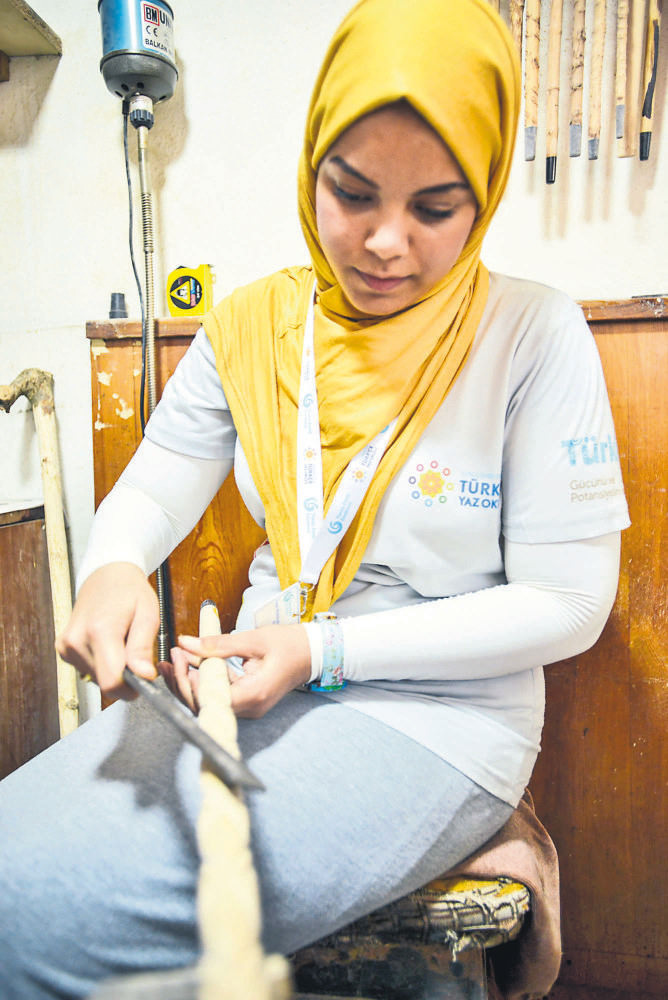 Although we call them students, it would be more correct to call them trainees. There are engineers, journalists and foreign trade specialists working in companies engaging in trade relations with Turkey who are among the trainees of the Yunus Emre Institute and who have elected to learn Turkish as a foreign language.

They have different motivations to learn Turkish. Kazan-born Russian Alexander Akhmadeev, 28, is an electrical engineer. When asked why he wanted to learn Turkish, he told us that he is interested in architecture. Different architectural works in Turkey attracted his attention at first, and while he was trying to learn more about these works, he decided to learn Turkish and attended the courses of the Yunus Emre Institute in his country. On the other hand, Makpal Eskeya, 22, is from Almaty, Kazakhstan. As an international relations student, Makpal elected Turkish as a second foreign language. She took Turkish lessons three hours a week for six months. At the end of such a short period, she could speak with us in Turkish and communicate what she wants to do in her field of interest in the future.

There is a Turkish saying that translates as "interrupting with honey," meaning someone wants to interrupt but wishes to add something to a point being made. Honey implies a more polite meaning to this expression, yet I would not have imagined a Georgian girl from Tbilisi would say it during our conversation in Turkish. Liana Beridze, 24, studies medicine in Georgia and takes Turkish lessons. When she learned that we were journalists, she specifically asked us to highlight in our story that she is vegan. We wanted to underscore that it is important to consume protein, but it would be hard to convince a senior medical student. When Liana asked if we eat meat for our daily requirement of protein, we preferred to change the subject by responding with "we like meat" in Turkish. 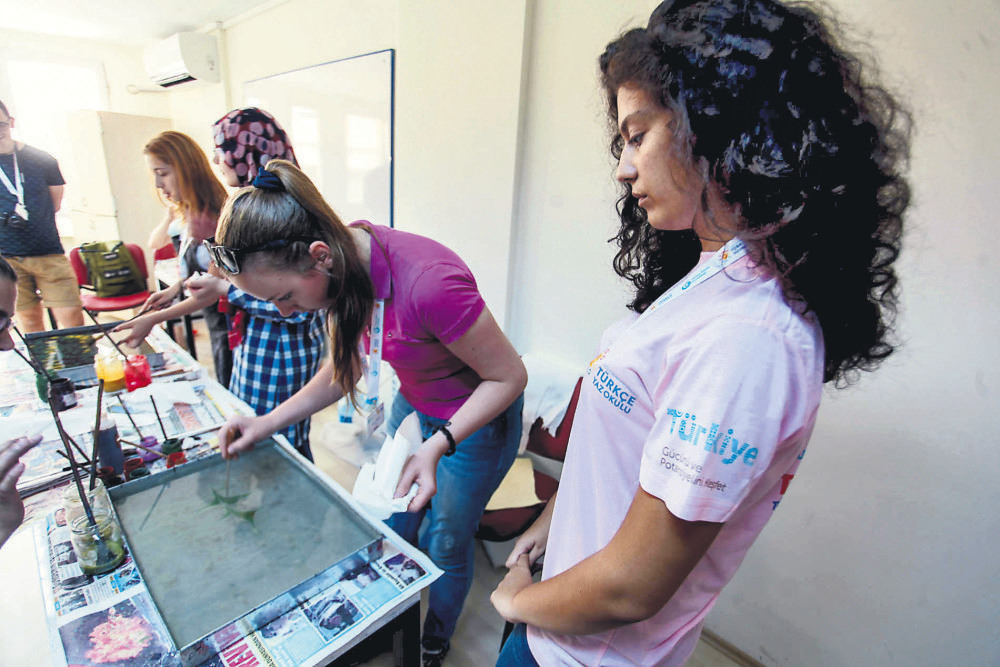 Kemalladdin Ali Gamil, a 31-year-old Egyptian communications engineer, is interested in Turkish TV series. The TV series titled "Kara Para Aşk" (Black Money Love) on ATV is his favorite. He loves Ömer and Elif, the main characters of the series, so much so, that he started learning Turkish in order to watch Turkish TV series in their original language.

A young British man said he is learning Turkish to better communicate with people living in North London. When we asked why he would like to talk to them, he said: "Because they are great people."

The program's coordinator, Associate Professor Mustafa Balcı, said students coming from the rich Arabian countries are interested in learning Turkish due to Turkish TV series. According to the statistics, Turkish TV series are the second-most exported series after American TV series. The development in the Turkish TV sector has different effects as well. While some tourists come to Turkey to look for the dresses and furniture they see featured on TV series, some others learn Turkish due to those TV series. This trend started with the series "Kurtlar Vadisi" (Valley of the Wolves). However, there are some misunderstandings. Many viewers believe ordinary Turks live the same was as portrayed on TV. When they come to Turkey, they realize that not all Turkish men are tough like Polat Alemdar, the leading actor of "Kurtlar Vadisi," and most Turkish people do not wear shoes in their homes.

Yunus Emre Institute students who receive academic Turkish lessons in Istanbul also receive lessons in the history of cinema. Students had a chance on Friday night to speak with famous actor Emre Kızılırmak and actress Nursel Köse from the Turkish TV series "Paramparça" (Broken into Pieces) and "Kara Para Aşk." As far as we understood from the student's questions, they have mastered our TV series better than we have.

There are also some trainees who study Turkology, history and international relations, studying Turkish for their academic research. The institute has a protocol with 62 universities where academics from the universities under the aegis of the Turkish Council of Higher Education are sent to those universities and source books are provided for them. Moreover, academics who would like to conduct research in Turkey are given support. Many students who learn Turkish at Yunus Emre Institute cultural centers often prefer Turkey for their graduate education.

There are also middle school students who learn Turkish as an elective course. They elect to take Turkish as a second foreign language after English. There are approximately 7,000 students who receive Turkish education at middle schools in Bosnia-Herzegovina. Additionally, Turkish is provided as an elective course at middle schools in Georgia, Romania, Jordan and Tunisia, while Turkish is a compulsory foreign language at a school in Poland. Necessary permission was received from the Polish Ministry of Education after a request was submitted by the manager of the Yunus Emre cultural center in Poland, and the school started offering Turkish to its students as a compulsory course.

Students of the institute can become teachers after some time. Students who complete their Turkish education can work as lecturers at the institute, universities or different centers. This practice eases the budgets of the institute as well. It is more advantageous for the institute to hire lecturers who receive the required score on the Turkish Proficiency Exam instead of sending a teacher from Turkey, which costs much more. The Turkish Proficiency Exam is valid internationally. People who are certified after taking this exam can start their education in Turkey without attending preparatory classes. Also, Turkish Airlines requires this license when employing non-native Turkish speakers.

Turkish is a more common language in the world than we expected. Turkish citizens are spread over many countries, but the Ottoman Empire was ruled by "devşirmes" (people of foreign origin). Learning Ottoman - the predecessor to modern Turkish - in the Balkans used to translate to being an Ottoman diplomat at the time, as devşirmes learned Ottoman to work in the government.

There are people who transmitted Ottoman to the present day although it is not their mother tongue. Taşlıcalı Yahya, who is known from the TV series "Muhteşem Yüzyıl" (The Magnificent Century), wrote one of the most precious elegies for Şehzade Mustafa (Prince Mustafa) in Turkish literary history. Yahya was Albanian and began learning Ottoman when he was 10 years old.

Speaking Ottoman used to mean making a lot of money in the Balkans. There is even a Balkan folk song whose name translates to "my lover became a clerk in the palace." A person who spoke Ottoman could become a clerk in those times, and there was a positive correlation between speaking Ottoman and earning money. Yunus Emre Institute officials say this situation is still valid today but with Turkish. "If you can speak Turkish, you can engage in trade. Turkish provides job opportunities for the people in our region," Balcı emphasized.

When the time was up, Akhmadeev asked us whether we had another question to ask him. We did not, however, and thanks to him and his fellow students, we learned about the language education being received by people whose mother tongues are different from us but speak Turkish as a common language.
RELATED TOPICS