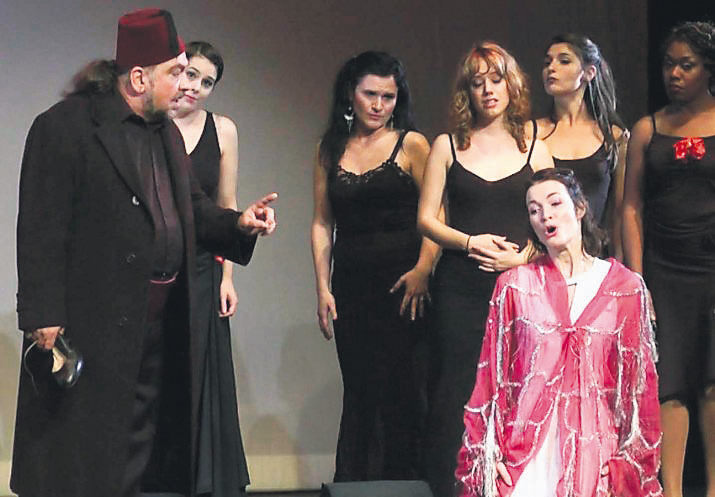 by Zeynep Esra İstanbullu Aug 13, 2015 12:00 am
The opera "Leblebici Horhor Ağa" (Master Hor Hor the Chickpea Vendor) was staged by the Ottoman Opera for the first time in 1875. Later, it was filmed by Muhsin Ertuğrul and Nazım Hikmet in 1923 and 1934.The opera was composed by Tigran Tchouhadjian who is mentioned together with famous composers such as Verdi and Offenbach. Tchouhadjian synthesized European and Eastern music traditions in a new and unique way.

The London Arcola Theatre, of which the general art director is Mehmet Ergen, introduces Gerald Papasian's adaptation of this opera called "Garine," which has been staged in different adaptations so far, om Aug. 14-15.

"Garine" will be played as part of the Grimeborn Opera Festival where new works of rising composers and musicians have been staged since 2007. Besides unknown or rarely known exciting works, the festival provides the opportunity to see the new versions of the traditional works. The Grimeborn, which challenges the perception that opera is an elitist field of art, which is inaccessible to most people, provides a window for new talents to show themselves.

"Garine," which is directed by Gerald Papasian, is a story about a young man named Armen who dreams of creating the first great theatrer company in Istanbul by breaking the popular street theatre tradition and putting the works of great writers on stage. But on opening night, his leading actress defects to a rival troupe and lets him down. It seems impossible to find someone else to substitute her in such a short time until Garine appears on the stage. Armen, enchanted with the voice of this young woman, tries to convince her to sing a song on the opening night, but her father who hates theatre is a big obstacle.

Papasian's adaptation of "Garine" was previously performed at the Theatre of Saint-Maur, Paris and the Theatre de L'Odeon, Marseille and it received full marks from the critics. The opera, which is a production of Arcola Theatre, will be performed in the U.K. for the first time in English. This precious work will be at Arcola Theatre for two days only, within the scope of the Grimeborn Festival.

Gerald Papasian is connected to the work and Tigran Tchouhadjian with passion. "Music of Tchouhadjian, who made extraordinary contributions to opera is fading into oblivion. People living in the west don't even recognize him. However, when people listen to him, they love him and wonder why they haven't heard of him before. That's why, I am happy to work with Arcola Theatre and Mehmer Ergen who provide the opportunity for me to learn about his music. Moreover, this indicates how universal art is," Papasian said.

Additionally, Papasian dedicates this work to three brave women who rose against the taboos of the period at the 140th anniversary of "Leblebici Horhor Ağa." Arousyak Papazian (1841 to 1907) was the first professional female actress in the Ottoman Empire, Şazik Köylüyan (1854 to 1895) was a professional female opera singer who played the role of Fatime in "Leblebici Horhor Ağa" and Afife Jale (1902 to 1941) was the first Muslim female actress.

Mehmet Ergen, who is the general art director at Arcola Theatre, convsaid: "The Grimeborn Opera Festival will affordably display the works of the most exciting opera singers in its ninth year. Besides rethought versions of classics such as Puccini, Verdi and Strauss, you can watch less known masterpieces like Tchouhadjian's 'Garine' and witness alacrity and continuity in our opera culture."
Last Update: Aug 13, 2015 1:53 am
RELATED TOPICS