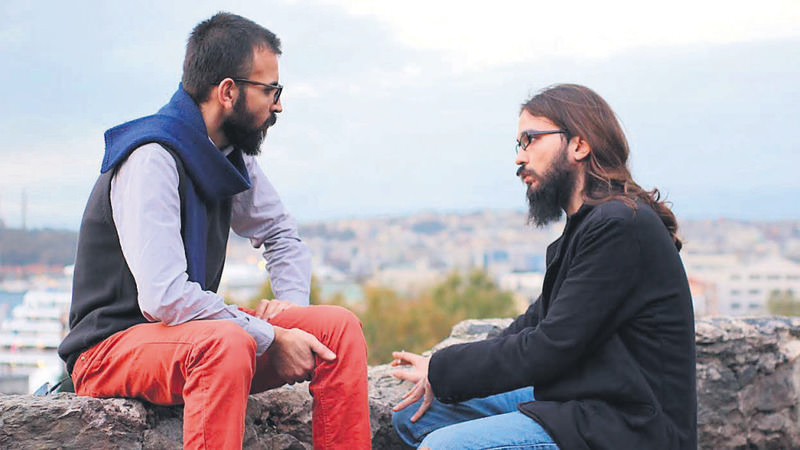 The documentary recently found a wider audience having been uploaded to YouTube in the last the few weeks. Alirıza said the choice of title was important for the project: "'Selam' is a very beautiful word that has a lot of meanings but the best meaning is 'peace,'" he told Anadolu Agency (AA).

It is his first professional documentary, and he explained why he started with this topic: "Here, in Istanbul, they [Syrians] established a new world to which no one pays attention ... I was really uncomfortable with the negative perception of Syrian people."

Alirıza interviewed 30 Syrian artists from different backgrounds - such as pro-regime, anti-regime, non-political and radical. Mohammed Zaza, a Syrian painter and musician, was his 25th interviewee. "I do not draw tanks, flowers or kids. I draw my inner changes," Zaza told Alirıza when they first spoke, later becoming close friends during the project. Zaza - a thoughtful young man who would not look out of place in art circles in London or New York - also composed the documentary's music.

Zaza appears in the film after having left Syria in 2012 where he had been lecturing at the Aleppo Academy of Fine Arts. Before coming to Turkey, he visited several Arab countries but his final decision was to stay in Istanbul. He has been living in the city for 14 months. "I never feel [like] a foreigner here. Istanbul is a very pleasant door or a window that opens to the sky for me. This city touches my soul and inspires me," Zaza said.

The director and his crew selected Syrian artists who have been living in Istanbul in particular to interview. "No capitals are found in the Middle East like Istanbul, which reunites all identities, even enemies, of the Middle East," Alirıza said. His other message with the documentary is "to encourage Syrian artists to stay here," and calls on everyone to create a new Middle East identity out of political or ideological divisions.

Now painting and recording music freely in Istanbul, Zaza said: "Syria's state is really strict. Whenever I opened an exhibition, they acted as if I opened a nuclear research center. We had a government but it proved its cruelty and dictatorship with this war." Zaza and Alirıza both agree that the Turkish and Syrian people have many similarities, but the war and the media drew a line between the nations because Syrians are depicted in a negative way.

The director thinks that the media can change people's attitudes, so he hopes the documentary will reach as many Turkish people as possible. They have received good feedback over the last year. After first screening the documentary, hundreds of people got in contact with Zaza on Facebook within a week. "Since then, only two persons - one Syrian - criticized us for not talking about the war," Alirıza said.

Other documentaries from Turkey have looked at more war-focused topics. "Suriye Zindanlarinda" (In the Dungeons of Syria), "Haykiris" (Scream) and "Savasin Cocuklari" (The Children of War) are among other Turkish films about the conflict.

Alirıza wants to shoot more episodes of the documentary, and hopes to shoot different films about Istanbul over the next year. Zaza is also planning to establish a studio, and said it could also become a research center on social issues.
RELATED TOPICS