Musical adaptation, of Shakespeare's ‘Romeo and Giulietta,' to come to Istanbul 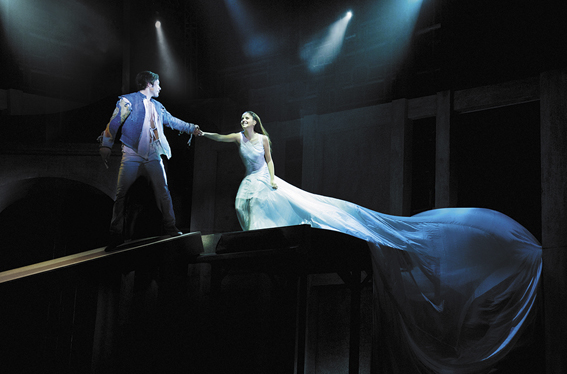 by Daily Sabah Aug 21, 2015 12:00 am
A reinterpretation of William Shakespeare's immortal love story, "Romeo and Juliet," "Romeo & Giulietta," will come to Turkey once again for a run of eight shows. Regarded as "a hymn devoted to beauty and discrepancy" with its music, lyrics and actors by the critics, the play is sure to enchant with the production of David Zard and original stage direction by Giuliano Peparini. The play's music was composed by Gerard Presgurvic and the lyrics were written by Vincenzo Incenzo.

The show, which was seen by over 400,000 people in eight months in Italy, will be performed by 45 artists. The performance promises an unforgettable experience with is flawless choreography and directorship.

The play features 23 different scenes, more than 270 different costumes and 40 technicians and a team of six communicators and production team of 15 people work backstage. The production will come to Istanbul with 13 trucks of scenery, costumes and technical equipment. The show will give life to this immortal story with a 3D digital stage. The hatred between the two noble families of Verona, the Montegues and Capulets, cannot prevent the love of two young people, which will seal their faith. While death eternally glorifies love through the tragic suicide of the lovers, it consumes the hostile families with pangs of conscience. Love in Shakespeare's story begins as a human experience but embraces the whole universe. The story of "Romeo & Giulietta" is remade by music with Ama e Cambia il Mondo.

Just like in any other original production, the play both respects and betrays the original story. The light that illuminates the disagreements and hides the passions returns to the audience with music in this original production and powers up the evil while drawing the lines of goodness with light tones. The music and rhythms sometimes symbolize the madness, sometimes the abdication of moral values. While a love story is painted, the play highlights the passion, eternal wait and the torture that the two lovers must endure.
RELATED TOPICS