Exploring childhood at the heart of Istanbul's financial district 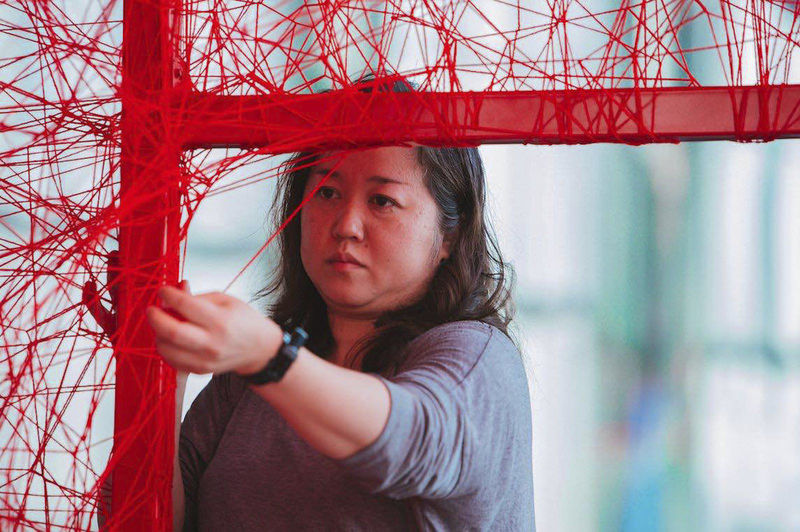 Not so long ago I came across an art installation by a world-renowned contemporary artist in an Istanbul shopping mall. I was browsing new titles at a bookshop in Zorlu Center and realized there was an art center adjacent to the shop. There, an installation by Japanese artist Chiharu Shiota had been on display during the past year. Displayed near large windows with a view of the skyline of Istanbul's financial heart, Shiota's "First House" offers the curious experience of exploring childhood and spirituality in a place associated more with commerce. Curated by Gülru Vardar, the work consists of a metal construction woven with red wool yarn. The dimensions of the construction (4x6x7 meters) and the length of the wool yarn (150,000 meters) give a hint of the experience offered by the work - "First House" leaves a wooly and homey impression on the visitor. 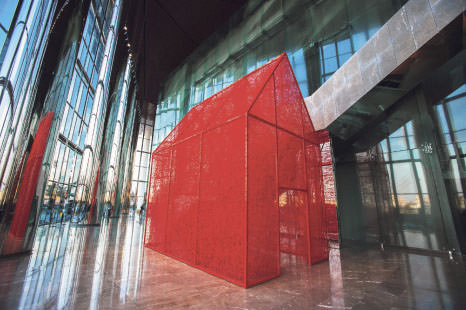 "In my artworks, I am always questioning how we came into the world, how we become what we are," Shiota told me in an interview last week. "So, I came to the idea of the first house that protects us and of which we are the first residents. 'First House' is commonly referred to as the 'House of Self.' By thinking of this in terms of sunrise and new beginnings, one begins to grasp the concepts inherent to the 'First House.' The new beginnings here are centered on the individual: The self and the attendant voyage of discovery that define a person ... who are you? How do you realize your best self? What will you become? 'First House' speaks to the realization of one's ultimate potential. I think this process of becoming a unique individual is one of the greatest contributions we make to the world in which we live."

Born in 1972 in Osaka, Shiota had been living in Berlin since her mid-20s. Having completed her university education at Kyoto Seika University, she held solo shows in numerous art spaces, including the Smithsonian Institution in Washington, Casa Asia in Barcelona and the National Museum of Art in Osaka. In 2007, Shiota was awarded the Art Encouragement Prize by the Japanese Ministry of Education for a solo show. Despite working in Europe most of the time, Shiota considers her artwork typically Japanese. During her earlier years in Berlin, she had met lots of many creative people from different countries and began identifying herself as an Asian artist.

More recently, Shiota had represented her country at the Japanese pavilion in this year's Venice Biennial. Curated by Hitoshi Nakano, Shiota's work "The Key in the Hand" seems linked with some of the ideas in "First House."

Nakano describes Shiota's Venice Biennial work this way: "Upon entering the gallery, viewers will find a space filled with red yarn. Attached to the end of each piece of yarn, suspended from the ceiling, will be a key. In our daily lives, keys protect valuable things like our houses, assets and personal safety, and we use them while embracing them in the warmth of our hands ... In this work, Shiota will incorporate keys as a medium that conveys our true feelings. Moreover, she will place two boats on the floor beneath the yarn and the hanging keys."

In our interview, Shiota described how "First House" addresses early childhood as well as the feelings of safety and security we associate with it. "Everything from our earliest steps to our view of the emerging world is considered here," she said. "How will we develop? What is our view on life? It all begins at the beginning, at the 'First House,' and serves to shape us for the rest of our lives."

According to Shiota, the work speaks to the person we are becoming and will become, both internally and externally. It addresses our personality and presentation to the world, our essential qualities, approach to life, demeanor and basic sensibilities. "'First House' is all about the inner self and outer body," she said.

When asked about the significance of wool, which gives an air of fragility to the work, and her reason for using such a strong color, Shiota drew a parallel between blood vessels and veins and her installation. "The red color of 'First House' and the yarn refer to life, through blood running in our veins. The viewer will have the possibility to enter 'First House' and go through its meanings of life. She will be able to think of its various meanings in relation to oneself placed as a human being in the world," she said.

Shiota also commented on the interaction between her work and the site that hosts it. "I'd rather thought to present 'First House' in such a performing arts center," she said. "The House has been positioned in a way that it can be seen from outside. Also, I was thinking of presenting a house inside another house ... I have chosen the red color also to highlight different shapes of the center and 'First House.' The center seems to be made of dark materials and the house is shining in red light, which, for me, means warmth and security."

According to curator Gülru Vardar, with each different visitor, the exhibition acquires a different narrative. "The installation puts forward the idea of individuals' existential condition of 'being there' and one's spiritual voyage to the ultimate potential take place on the same plane ... 'First House' does not represent an imaginary or utopian reality but rather a shared activity; an encounter between the viewer and the artwork. In this encounter, meaning is elaborated collectively rather than in the space of individual consumption."

A local team in Istanbul first produced the metal frame of the house before Shiota's assistants started working on the red wool yarn. "The different parts of the house [were] produced in Istanbul by a Turkish company. Then the parts [were] carried to Zorlu [Center] PSM where they [were assembled] by several workers on site," Shiota explained. "It took one week with two of my assistants to finish 'First House.' We used several ladders and begun [at] the top of the house, slowly weaving to the bottom. My installations always require physical hard work," she added.
RELATED TOPICS