Female touch in art on display 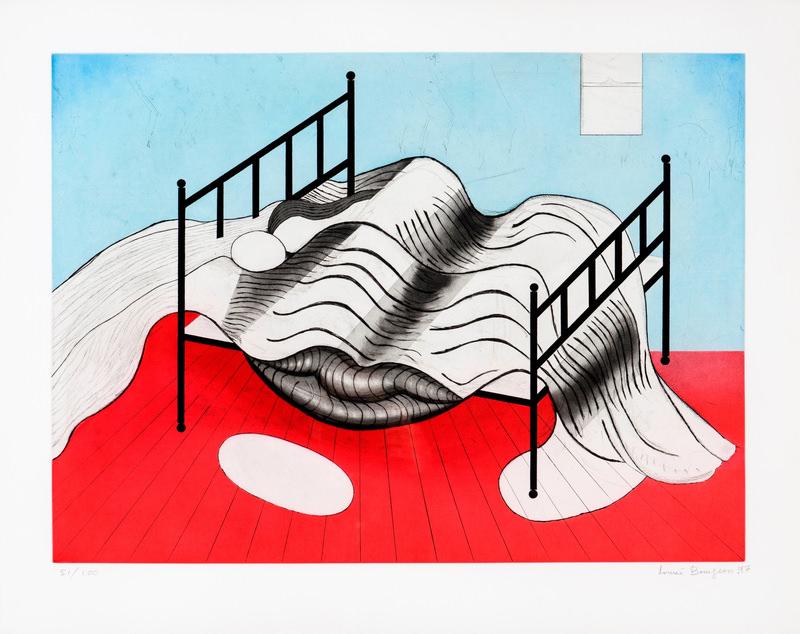 Bourgeois's art encompassed issues such as memory, identity, the body, belonging, space, remembering, forgetting and the uncanny at length.
by Zeynep Esra İstanbullu Sep 02, 2015 12:00 am

Akbank Sanat started its new art season on Monday with an exhibition titled ‘Louise Bourgeois: Larger Than Life,' comprising 58 works by Louise Bourgeois, who is considered to have started a unique female approach in artistic circles

Akbank Sanat commenced its new season of art with a world-renowned exhibition. The exhibition titled "Louise Bourgeois: Larger than Life" consists of the works of one of the most prominent female artists of the 20th century, Louise Bourgeois. Bourgeois not only deeply influenced later art movements and artists, but also contributed to the conception of the history of art in new light. The exhibition will be on display until Nov. 28 at Akbank Sanat.

The exhibition, curated by Professor Hasan Bülent Kahraman, brings together 58 pieces of artwork by Bourgeois for the first time in Turkey. Bourgeois' work has not been seen in Turkey apart from a single piece of artwork that was exhibited in 1997 during the fifth International Istanbul Biennial.

Having used the phenomenon of femininity as the backbone of her art, utilizing her interesting life story as her main source in creating her art and employing data derived from almost 35 years of psychoanalysis sessions in her works, Bourgeois held a position that could be considered the foundation of Feminist art. At the same time, her art encompassed issues such as memory, identity, the body, belonging, space, remembering, forgetting and the uncanny at length.

In conjunction with the exhibition, conferences and meetings will be held at Akbank Sanat on Bourgeois' art in particular as well as feminist art, other related issues and feminist art in Turkey. In addition, a corner dedicated to Bourgeois will be created at the Akbank Sanat library and films about the artist will be screened. Kahraman said in the opening ceremony that Bourgeois created some of the most radical artwork of the 20th century, and added: "Even though Bourgeois did not define herself as a real feminist, she was undoubtedly one of the most respected founders of the feminist art movement."

Kahraman stressed that the exhibition has its own compartments within it. "There are certain cabinets in the display system. A cabinet on display downstairs holds works on the form of a given problem. Apart from that, there is an anatomy cabinet that displays some drawings about partners."

The curator said the works on display show all layers of Bourgeois to an attentive audience through patterns, prints and engravings. "I can say these works reveal deep, great feminine subconscious and feminist problems. The blocks illustrate matters where woman and man contradict, interact, touch and come face-to-face to the surface," Kahraman said, adding: "There is a second striking point; Bourgeois created abstract and closed spaces. Each and every place has a unique memory. Human's transform places as an element of their memory. Similarly, Bourgeois also has elements that go in parallel, that cross or draw apart. The audiences can see these elements in the exhibition. That is why the exhibition is a comprehensive and effective one." Kahraman also stressed that Bourgeois has other great works that could not have been brought to the exhibition.

One of the most influential sculptors and artists of the 20th century, Louise Bourgeois was born in Paris in 1911. She gave priority to her own experiences throughout her artistic career, which lasted more than 60 years. Bourgeois used various materials such as wood, stone and metals in her sculpture work and began painting in the 1930s.

Known as the first woman to open a retrospective exhibition at New York's Museum of Modern Art (MoMA) in 1982, Bourgeois was awarded an honorary doctorate by Yale University. She represented the United States at the 1993 Venice Biennial with her work titled "Maman," with which she symbolized her mother's fragility.

A documentary film was shot about "Maman," titled "Louise Bourgeois: The Spider, The Mistress and the Tangerine" by Amei Wallach and Marion Cajori. Bourgeois died on March 31, 2010.
RELATED TOPICS