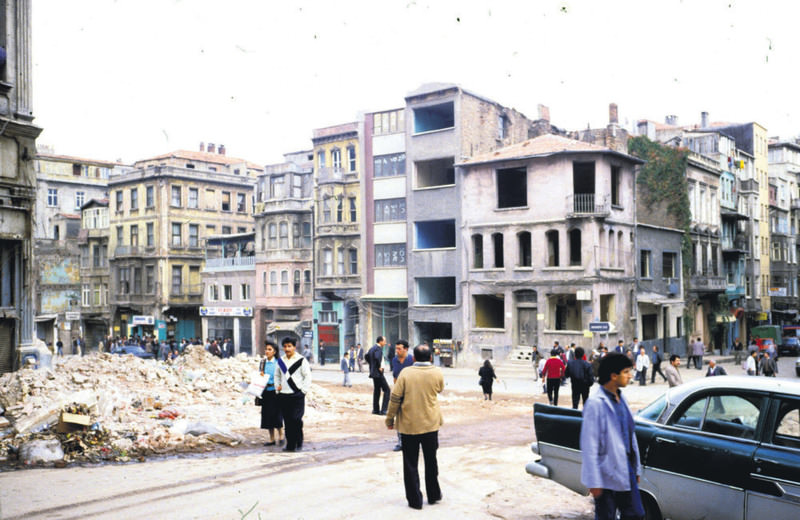 SALT Beyoğlu and SALT Galata are simultaneously hosting an exhibition exploring Turkey's recent past through social movements and elements of popular culture that emerged after the coup d'etat on Sept. 12, 1980

How did we get here, the first of SALT's projects on the 1980s, focuses on the recent past of Turkey starting from 1980, a period that introduced a free market economy under military rule. The exhibition gives an account of the decade, with an emphasis on Istanbul, through archival materials including magazines, advertisements, photographs, video recordings and films. The exhibition holds work from Halil Altındere, Serdar Ateşer, Aslı Çavuşoğlu, Barış Doğrusöz, Ayşe Erkmen, Esra Ersen, and Hale Tenger. All of the pieces reflect the political and cultural climate of the 1980s and give visitors more insight into the social dynamics of this period.

On Jan. 24, 1980 the government initiated major reforms to transition the country into a free market system and restore economic stability. Turkey's longstanding import substitution economic policies were replaced by an export-led growth economy. Soon after, the September 12, 1980 coup d'etat suppressed all dissent and political opposition; rising state violence threatened to degrade human rights. The 1982 Constitution, which was ratified by a referendum under grave pressure from the military regime, remains in place today with few amendments.

Neoliberal policies after the 1982 Constitution became the principles of the first civilian party that came to power after the coup d'etat, the Anavatan Partisi [Motherland Party] (ANAP). During its time in power from 1983 to 1991, the ANAP supported a consumption-oriented system while the military regime kept blocking all oppositional movements and political organizations. Throughout the 1980s, the government, in cooperation with the military, promised prosperity and liberation but enforced authoritarian principles in social and political life.

After the quashing of trade unions and other political organizations by the military intervention and the 1982 Constitution, different forms of civil opposition and representation began to emerge in the first half of the 1980s. As the decade came to a close, civil society took an active role in democratization and began to challenge the status quo. People who lacked political representation, such as feminists, environmentalists, anti-militarists, gay rights activists, human rights defenders and many others, came together to form alternative groups, as everyday life became a battleground for politics. This solidarity, centered around democratic rights and demands for freedom, paved the way for new social organizations to emerge.

How did we get here intends to map this struggle and help trace the origins of the current context of Turkey at this turning point, both in relation to the recent past and through the social movements and elements of popular culture that took hold after the 1980 coup d'état. This exhibition is part of the five-year program The Uses of Art - the Legacy of 1848 and 1989, organized by L'Internationale.
RELATED TOPICS