All Those Moments Will Be Lost in Time, Like Tears in the Rain 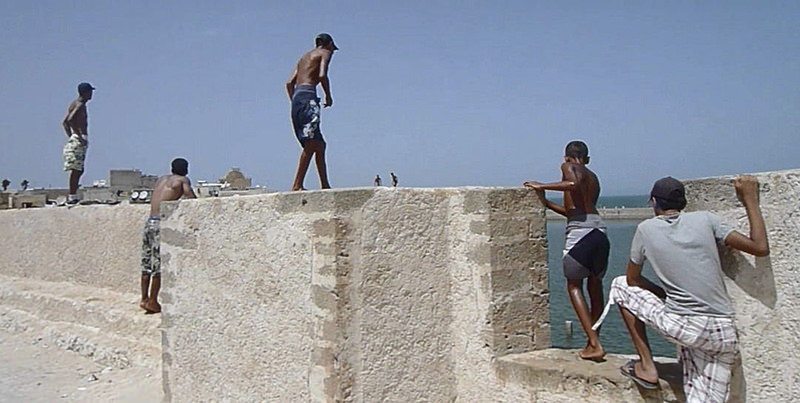 Last week, Daily Sabah attended the opening of Latifa Echakhch's exhibition ‘All Those Moments Will Be Lost in Time, Like Tears in the Rain,' curated and organized by Protocinema, an art organization that brings site-aware exhibitions all around the world. We had the chance to discuss with the artist what concepts and feelings lay behind her latest exhibition, which can be seen until Oct. 24

Latif Echakhch, born in 1974 in Morocco and raised in France, is a renowned, award-winning artist whose latest accomplishment was winning the Zurich Art Prize in 2015. She is known for her startling work in which she mostly reflects her take on political and social issues in the world along with focusing on issues of identity, culture and multiculturalism. As a Moroccan raised in France, until the bomb attack on the Paris metro in 1995 by Islamist militants, she felt completely detached from her roots and felt French. However, after the bomb attack she started questioning her identity and sense of belonging, which later was reflected in her work.

Echakhch attended an art school in Grenoble, a southeastern city in France and later at the Ecole Superieure d'Art, where she was one of three students originally from North Africa among 150. Her first group exhibition was in Paris in 1999 while studying at Ecole Superieure d'Arts de Cergy-Paris where she started focusing more on video as a medium for expressing her ideas on identity and structures in society. Since then Echakhch has had solo exhibitions around the world in various reputable art centers, biennials and museums including Centre Pompidou in France, Kunsthalle in Basel and the Tate Modern in the U.K. She currently lives and works in Switzerland.

Her current exhibition, which can be visited until Oct. 24, 2015 in Karaköy, gets its title from one of the final scenes of "Blade Runner," the American, sci-fi cult classic film based on the 1968 novel by Philip K. Dick "Do Androids Dream of Electric Sheep?" The exhibition and the title both underline how hope is lost especially in younger generations. When we asked what drew her to this topic, she mentioned that she experienced the feeling of being in a place and in a certain moment, embracing it, and started looking for a title. Then she remembered the lines from the last scene in "Blade Runner," when Roy Batty, the last replicant, is dying, his system is shutting down and he expresses himself in "an almost childish, yet poetic way." "All those moments will be lost in time, like tears in rain. Time to die."

The exhibition includes two videos and a floor work in an abandoned, forgotten building in Karaköy, Istanbul. The selection of work addresses the loss of young people and hope and temporality due to how the world is becoming a playground for war.

Her first video is titled "Waiting for the Dolphins" and was shot in Istanbul's Eyüp district close to Sarayburnu. Echakhch said that she saw the dolphins on one of her visits to Istanbul and that they were very close to shore, "you could almost touch them." After that she wanted to come back and try to see whether she could see them again, to sit at the water's edge and hope for that special moment to happen again. So the main idea was to question whether one "can you repeat a magical moment that is also very romantic?" She also tried to see whether she could capture the feeling of being in that special moment when she tried shooting the video on a boat in Italy, but she could not get the same feeling on the water.

"You get reminded of the tragedies that are happening in the sea when you look at it. Initially, I was thinking about the refugee crisis. So as an artist I also wanted to show the beauty of the sea. Kind of like a resistance, but like a missed note," Echakhch said about "Waiting for the Dolphins." So in order to shoot the video, she visited the same shore in Istanbul and shot the video, which only shows the waters of the Golden Horn with a little view of the city.

The second video in the exhibition is titled "Jadid," "new" in Arabic. The name is taken from al-Jadid, a port in Morocco, which has a big fortress built by the Portuguese. The video shows young Portuguese boys diving from the fortress walls one by one in succession for hours. The walls are several meters high and the jump is risky. Echakhch describes the boys as "the new, the youth." And the video runs the viewer almost wants to join them, seeing how careless and brave they are; almost wanting to join, but with weakened courage with age and time, we all have developed a sense of caution, but the youth in the video represent that blind innocence and braveness that "the new" has. The video also cuts to a black screen on a loop. "I wanted to give the feeling of closing your eyes and opening them back again to see the same view. Like little flashes of memories," Echakhch said.

The third part of the exhibition is a floor installation of a text written with a long brush and water directly on the floor, inspired by Chinese calligraphers in public parks in China. As the text is in water it is also temporary and will dry out in time. The text in English is taken from letters written by Syrians to their families who have gone to fight the Islamic State of Iraq and al-Sham (ISIS). "For several months, almost years, young people in Syria have been going to war. Wars have always affected me. When I was young I wanted to dedicate my life to change and save the world and free animals," Echakhch said. She found the letters on the Internet and newspapers and turned the sentences into poetry. "Water will dry. It won't stay forever. It's like a monument to think about all those lost kids, yet in a very discrete way," Echakhch said about her work, which questions concepts of war, being in the wrong place and the wrong time and temporality of things.

When asked about what life in Switzerland is like and whether she feels the sense of belonging there, Echakhch said that it is not simple for her to say she's Moroccan or French, as living in Switzerland was the only thing she chose. "I had to find a place I could work, so it had to be a country that is not in war. Living in a big city is stressful. No, I live in a tiny city where you walk to the next town, say 30 kilometers away, and there you become a stranger. It's given me a lot of freedom." Along with her art projects, Echakhch started helping young art students create their own work or installations and find their own style.
RELATED TOPICS