What lies beneath perceivable on display 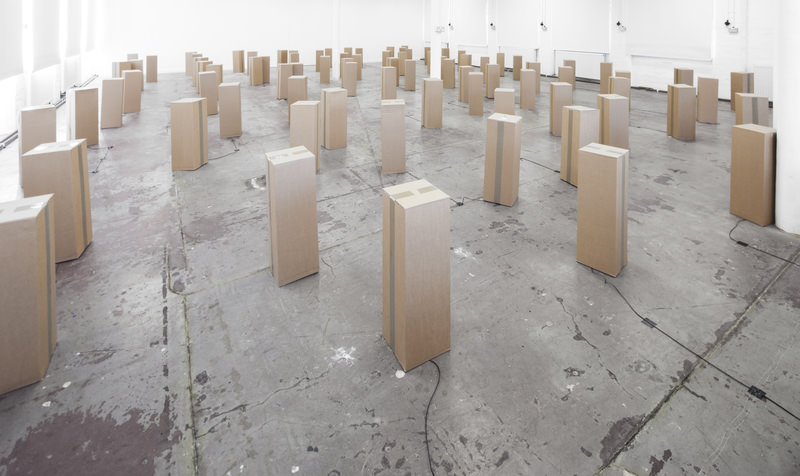 Zimoun's site specific installation of 240 DC motors in cardboard boxes fill a room where the boxes shake, driven by ominous forces, and create a sound architecture.
by Daily Sabah Sep 10, 2015 12:00 am

Borusan Contemporary, which has already jazzed with the 14th Istanbul Biennial in September, aims to heat up the art world, with a new exhibition titled ‘What Lies Beneath' that focuses on the problems caused by migration and displacement

Featuring the most important figures of the world's contemporary art stage, "What Lies Beneath" focuses on refugees and their problems at Borusan Contemporary Art Gallery. The exhibition, which will continue until Feb. 21, 2016, invites art buffs to discover the finest examples of contemporary art. Displaying four special works of contemporary artists Krzysztof Wodiczko, Michal Rovner and Zimoun, the exhibition sheds light on the problems of refugees such as alienation and the lack of self-confidence. The most striking work featured in the exhibition, which interprets the fear of being "the other" with four visuals as big as a room, is Michal Rovner's "Broken Time." Made of natural stone, this one-ton work was put on display at Borusan Contemporary after using different techniques to create it. "Broken Time" is lit using special techniques and presents a story of migration that began centuries ago. The exhibition also hosts Wodiczko's work "Guests," which reflects the hard lives of invisible refugees, Zimoun's "96 Prepared DC Motors and Cardboard Boxes," which creates chaos, and Rovner's "Untitled 4 (Panorama)," which enables visitors to experience the concepts of time and place. Christiane Paul, the event's curator, works as an assistant curator at the Whitney Museum of American Art and is a faculty member of the New York School of Visual Arts.

There is an ongoing period of instability and conflict around the world. Europe is facing an escalating migration crisis caused by war elsewhere and human rights violations and poverty lead people to flee their countries and societies without a sense of belonging. Other than that, the gap between rich and poor is widening, countries struggle to attain or maintain democratic ideals and ethnic and religious identities frequently become intertwined with violent conflict. All these vital factors pave the way for existential forms of alienation for individuals. The systems and forces creating these conditions are often difficult to understand in their complexities, generating feelings of insecurity and a fear of the other, be it an individual, ethnic or religious group or a circumstance such as persecution or poverty.

The exhibition "What Lies Beneath" strives to capture an atmosphere of disconnected realities, increasing alienation and decaying trust that result from factors that often lie beneath the surface of the visible. The three room-sized installations in the exhibition with pieces by Michal Rovner, Krzysztof Wodiczko and Zimoun create a space for pondering cultural and social conditions and peripheral factors that may not be easily perceived at first glance and create feelings of uncertainty. The conditions or forces that remain beneath the surface may provoke similar emotions such as fear or insecurity but do not necessarily have common and uniform qualities. They can stretch beyond the visible because of a lack of understanding in terms of mechanisms, nature or a disconnection between social, cultural or emotional contexts.

The artists have set up striking conditions that will enable visitors to face what lies beneath the surface, the big picture, giving us an opportunity to engage with the unknown. Wodiczko's large-scale video projection "Guests," which was first shown at the Venice Biennale, addresses concrete political and social issues. The work comprises projected windows giving a slightly blurry view of immigrants from countries around the world, talking about their living conditions, unemployment and problems in legalizing their stay. The shadow images of the immigrants always remain slightly out of reach and on the other side, thus making them exposed while suggesting their social invisibility. What lies beneath the graspable for both the immigrants and the viewer are mostly legal constructs, policies and notions of individual and national identity. The installation invites visitors to contemplate both the otherness of immigrants, while having a thorough look at themselves as others separated from them. The immigrants sharing their stories always remain on the outside at the back of the windows, through which the audience sees them, and are most of the time foreign to the country in which they live.

Wodiczko's work scrutinizes the concept of guests. In his work, the audience becomes a guest in the projected environment where immigrants' stories are shared. Rovner's "Broken Time" presents a more abstract view on humanity while at the same time there is a political subtext relating to questions like migration and displacement. In Rovner's work, the movements of tiny human figures become "human marks" displayed as hieroglyphic text focusing on relationships between time and space and their comprehensibleness. The hieroglyphic nature of the marks makes reference to antiquity and the beginnings of text. The marks appear to be static engravings from a distance and as the viewer gets closer to the work the marks reveal themselves as a notation system of human figures in perpetual motion. The work points to the connection between permanent and time-based presenting of the past, present and future in layers, making time itself its material. Rovner's pieces are characterized by a specificity of materiality, from surface textures, be they stones or LED screens, to the speed of motion constructing the materiality of time. Even though the human figures may remain illegible as a conventional text, they have something to tell about temporalities. Rovner explains that what she aims is to reach a layer underneath, starting from reality and historical contexts, as she prefers to not address them directly and creates abstractions. What lies beneath in Rovner's work are the complexities and fragility of human existence in time and space, manifested in breakages and ruptures. Rovner's exploration of order and its disturbance, dynamics, connection and isolation are echoed in Zimoun's installation "240 prepared dc-motors, cardboard boxes 60x20x20cm." Both artists employ repetition as a means of movement rather than emphasizing the mechanical. Zimoun's site-specific installation of 240 prepared dc-motors in cardboard boxes fill a room where the boxes shake, driven by ominous forces, creating a sound architecture. The rhythm of movement and sound suggests both a prepared, controlled system and a living structure that evolves by chance, never completely revealing what produces it. "240 prepared dc-motors, cardboard boxes 60x20x20cm" invites the audience to think about the complexity of environment. All in all, the works in "What Lies Beneath" offer a space to contemplate the complexities beneath the surface.
RELATED TOPICS