Puppets to leave their mark across the world 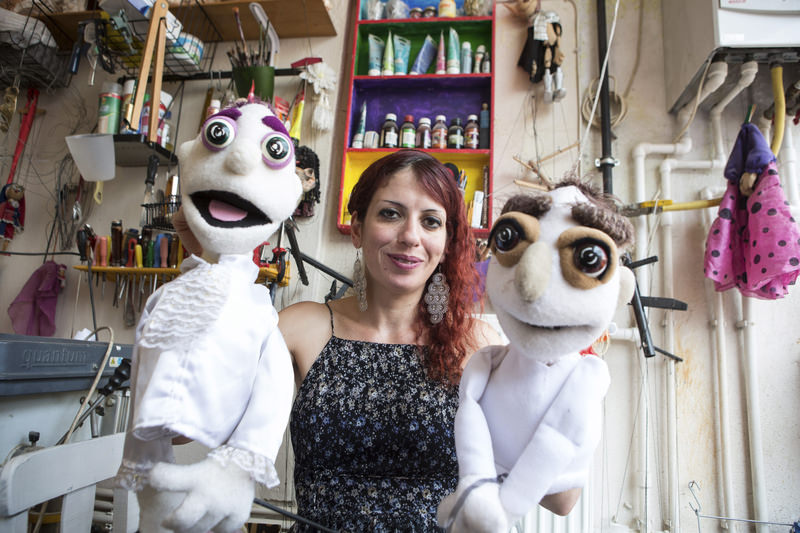 Puppeteer and founder of Ahşap Çerçeve Puppet Theater, Çağrı Yılmaz, has dedicated herself to puppetry for years. Saying that puppet theater is not properly appreciated in Turkey, Yılmaz wants to leave her puppets in every country she visits, starting with Argentina

Marionettes and supported puppets are hung on a wall one by one. Some of them were designed as simple hand puppets, while others are covered in rich colors and designs. These colorful puppets look as if they are about to come to life. They all belong to puppet artist Çağrı Yılmaz, the owner of the Ahşap Çerçeve Puppet Theater and Workshop in Taksim. Yılmaz, 35, designs each puppet herself. Some of the puppets are nearly life-sized, while others are quite small.

Yılmaz found herself in the world of puppets 16 years ago. When she was a philosophy student at the Middle East Technical University (METU), she used to participate in the university's theater club and accidentally attended a puppet workshop run by Haluk Yüce at Tiyatro Tempo. She later researched puppets and further learned about the craft in Prague, as there are very few opportunities to study the art of puppetry in Turkey. Yılmaz continued his university studies and puppet training together for a while. In Prague, she was highly influenced by the dramatic stage of puppets instead of their design. "Puppet Theater is different from traditional theater form. While viewers watch a puppet theater, they find themselves in an illusion and both puppet and puppeteer becomes a single unit in the eyes of the audience," she said, adding that she decided to influence the audience with puppet arts. "I was mesmerized by this," Yılmaz said.

Following his two-year education in Prague, Yılmaz founded Ahşap Çerçeve Puppet Theater and Workshop with Emre Tandoğan in Ankara. The duo's first puppet play was named "Düğün" (Wedding). They moved the workshop to İzmir and then to Istanbul in 2006. His team staged Notre Dame at Crimea Memorial Church in Istanbul's Beyoğlu district and seven others, including "Romeo and Juliet," "The Little Mermaid," "Araf'ta" (In Limbo), "Deccal," Resimli İcatlar Atlası (Illustrated Innovation Atlas) and "Dona Rosita'nın Dokunaklı Güldürüsü" (A Touching Comedy of Dona Rosita).

Having participated in many international festivals, Yılmaz's puppet theater appeared in different countries like Pakistan, China, France and Croatia. "We won a performance award with our play 'Kabare.' The play presents different puppets, each has a different story," she said. Yılmaz feels mesmerized when she finishes the design of the puppets. "When you play with puppets, the artist looks at the viewers and stage objects from the eyes of the puppets. The important thing is to understand the stage from a puppet's side. You cannot play independently," Yılmaz added.

Yılmaz recently left for Buenos Aires to run his exhibition "Ucubeler" (Freaks) and is expected to give a seminar on puppet arts. She wants to leave one of his puppets in each country she visits. "I want to leave my puppets in every country," she said, adding that she is planning to combine different techniques in his plays. She wrote another puppet play based on the Grimm Brothers with Senem Cevher. They will stage it at Nilüfer Municipality. "We are planning to use video projection." Yılmaz also said that when she receives an applause after a play, she does not take it for herself, but for his puppets. "Each of my puppets is priceless and I am only a mediator," she stressed. Yılmaz holds puppet design workshops for adults at his Taksim workshop. Complaining that puppets are only associated with children and not appreciated, Yılmaz hopes to train serious puppeteers.
RELATED TOPICS