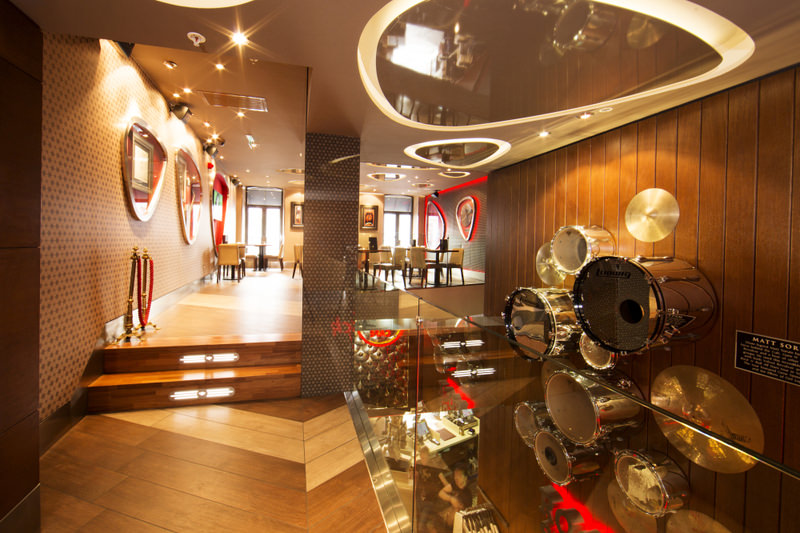 by Arda Sayıner Sep 24, 2015 12:00 am
Many of us have probably had a Hard Rock Cafe T-shirt at some point in our lives. Even if we did not, we hankered for one. Especially with "America-mania" in Turkey, the popularity of rock music has increased in the last couple of generations and the American food culture has made many around the world pass by a Hard Rock Cafe at least once. This is a brand that carries fine dining into conventional food culture and adds rock music, as well as rock music-themed decor. The branding success of Hard Rock Cafe, which goes beyond an ordinary American diner by serving American dishes in a concept restaurant, whose worldwide branches experience long queues formed at the doors, is not a coincidence at all. Opened on a street across from Galatasaray High School in Beyoğlu with an investment worth millions of dollars, the place is the answer for a specific Turkish demographic. So, what catches the eye in this Hard Rock Cafe which operates in a six-story historical building in Istanbul? I think it's greatest feature is its architecture, which was intentionally cultivated in a much more fine way than many Hard Rock Cafes I have seen in Europe and the U.S. From the decorations on the wall to the video screens, most of the design is shaped as a guitar pick. The special glass sections, on the other hand, host the costumes and accessories of numerous music stars between the '70's and 2000's, from the original jacket of Elton John to the glittering dress of Shakira. Let me be clear that they have paid great sums for these original products as well as their insurance contracts meant to protect them.

As for the tastes of Hard Rock, my favorite dish is the hickory-smoked pulled lamb burger. You may want to order the homemade guacamole with it. Although selecting one of their signature cocktails is difficult, the drink I found to be the most successful was the blue Hawaiian cocktail. For dessert, the classic cinnamon apple pie is the best. With assorted Hard Rock Cafe badges on their T-shirts, their tattoos, colored hair, good English and smiling faces, the crew that serves these tastes demonstrates the "different and good personnel" standard of Hard Rock around the world. Every floor of the building is separated for a different purpose. Its main bar area, stage area, the areas where special parties are hosted, the karaoke area and its open terrace where you can spend time during the summer all make Hard Rock a venue that is full of different events for the whole week. I recommend you follow the stage shows of their famous rock artists, and not miss either the karaoke nights or "ladies day," which offers special opportunities for ladies. I want you to pay attention to the professionalism and warmth of the waiters, as well as their tattoos. Everyone is quite the expert here. They are knowledgeable about rock culture and they have learned the brand very well. Depending on their experiences, everyone has plenty of Hard Rock Cafe badges on their aprons. While leaving the place, which instantly takes you out of Turkey, I recommend you stop by the official Hard Rock Cafe shop selling cute, little rocker creature toys. Apart from the toys, you should not miss dozens of badge types, earrings in the shape of guitars and the T-shirts where the Bosporus Bridge is designed in the shape of a guitar. However, the real thing you have to see is the energy and the love of Istanbul through the eyes of the cafe's successful marketing director, Nihan Hatipoğlu, in case you run into her.

Another reason why I love the 44-year-old brand Hard Rock Cafe is its sensitivity toward social responsibility issues. Their support for breast cancer research, as exemplified by their International PINKTOBER campaign, and the awareness they have created so far is admirable. Working under the motto "Take Time to be kind," the global partners of the PINKTOBER campaign, which is held every October, include the Breast Cancer Research Foundation in the U.S., Caron Keating Foundation in the U.K. and Turkish Breast Foundation (MEVA). The face of the campaign is the famous actress Belçim Bilgin, who hosted us at her house. Bilgin was the right name for this project with her Hollywood-level talent, her beauty and her modesty. I have witnessed how successfully she embraces this project with her warmth, sensuality and knowledge about breast cancer. Congratulations to Hard Rock Cafe for their sensitivity concerning social responsibility issues and for choosing Bilgin.

Hearing similar praises from actress Meryem Üzerli, singer Suzan Kardeş and other numerous artists attending the same event, proved how right I was in this regard. The special pink T-shirts and badges the Hard Rock Cafe prepared for PINKTOBER will be sold online at www.pintoberistanbul.com throughout October for the first time around the world. Again, the income from the pink menu, which will be offered at Hard Rock Cafe in Taksim, will be donated to MEVA. As I heard from Hard Rock Cafe's public relations agent, Metin Gürsoy, the brand will make a bigger splash in our lives with numerous new upcoming events. Congratulations to Hard Rock Cafe board member, Ferhat Ferhangil, and all of the Hard Rock Cafe's crew. I hope they rock Istanbul lovers even more.

Top 3 Coffee Shops of the Week