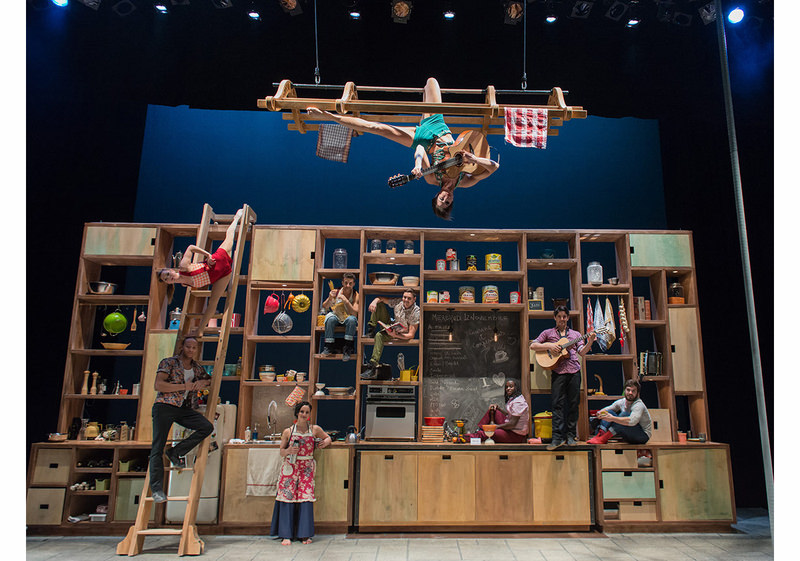 The Istanbul Foundation of Culture and Arts (İKSV) will host "Les 7 Doigts de la Main" (Seven Fingers of the Hand) along with their project "Cuisine and Confessions", in which the company takes acrobatics and dance into the kitchen in December. "Cuisine and Confessions," which was applauded everywhere it was staged, will be performed at the Zorlu Center's Performing Arts Drama Stage with a total of six performances from Dec. 23-27.

"Cuisine and Confessions" offers an energetic and rich feast for 90 minutes. The show focuses on the tastes and smells of a kitchen and blends childhood memories, relationships and family traditions with their own artistic interpretations. Nine dancers from "Les 7 Doigts de la Main" color the show with thrilling acrobatic moves, the ensemble members' dreams, experiences, roots and life stories, accompanied by music of their composition as well as quite moments.

Presenting the unique harmony of circus, dance, theatre, music and food, "Cuisine and Confessions" will offer a one of a kind stage experience to the audience. Shana Carroll and Sébastian Soldevila, who are also the artistic directors and the founders of the ensemble, choreographed this show. Shana and Sébastian have also choreographed Quebec's 400th anniversary performance by Cirque du Soleil in 2008 and their choreography has been highly acclaimed. Apart from compositions that have been prepared exclusively for the show, "Cuisine and Confessions" also features covers of well-known classics. The ensemble performed to a full house in every city it toured in. "Cuisine and Confessions" was the opening performance of CINARS Biennial in Montreal in 2014 and has been performed in countries such as Germany, Sweden, France, Italy, Austria and Spain, before coming to Istanbul.

The ensemble has also made their name heard by the masses thanks to the awards they have been granted since 2006. "Les 7 Doigts de la Main", which has been creating miracles with their shows, won the "Governor General's Performing Arts Award" in 2008 and Off Broadway Alliance Award in 2012. The ensemble presented 11 different shows in 350 cities in 40 different countries over the last 12 years, and also received four gold medals from the Mondial du Cirque de Demain over the past couple of years.

Founded in 2002 and claimed as the world's most famous circus by Le Monde, the Canada based ensemble was established to introduce the art of the circus to the masses. The seven founders of this troupe, Isabelle Chasse, Shana Carroll, Patrick Leonard, Faon Shane, Gypsy Snider, Sebastien Soldevila and Samuel Tetreault bring together their different skills, experiences and qualities to achieve their common artistic goals. The tickets for the show can be purchased on the official website of Biletix or at the counters of İKSV between 10 a.m. and 6 p.m. on weekdays.
RELATED TOPICS