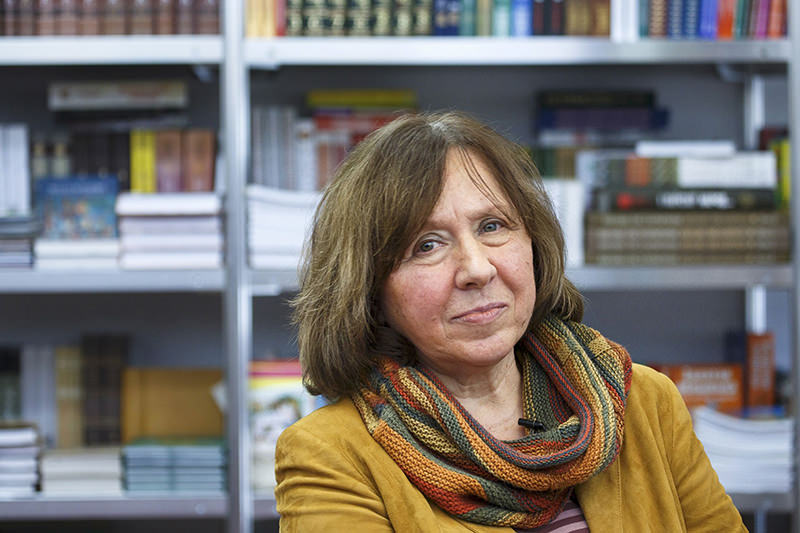 Alexievich, 67, used the skills of a journalist to create literature chronicling the great tragedies of the Soviet Union and its collapse: World War II, the Soviet war in Afghanistan, the 1986 Chernobyl nuclear disaster and the suicides that ensued from the death of Communism.

Her first novel, "The Unwomanly Face of the War," published in 1985 and based on the previously untold stories of women who had fought against the Nazi Germans, sold more than 2 million copies.

Her books have been published in 19 countries. She also has written three plays and the screenplays for 21 documentary films. The Swedish Academy cited Alexievich "for her polyphonic writings, a monument to suffering and courage in our time."

The academy's permanent secretary, Sara Danius, told that Swedish broadcaster SVT that she reached the writer just before the announcement.

She praised Alexievich as a great and innovative writer.

"She transcends the format of journalism and has developed a new literary genre that bears her trademark," Danius said.

The daughter of two village schoolteachers, Alexievich studied journalism in Belarus, which at the time was part of the Soviet Union. She now lives in Minsk, the capital of Belarus, and like many intellectuals supports the political opponents of authoritarian President Alexander Lukashenko, who is up for re-election on Sunday.

This year's Nobel announcements continue with the Nobel Peace Prize on Friday and the economics award on Monday. All awards will be handed out on Dec. 10, the anniversary of prize founder Alfred Nobel's death in 1896.
Last Update: Oct 08, 2015 2:37 pm