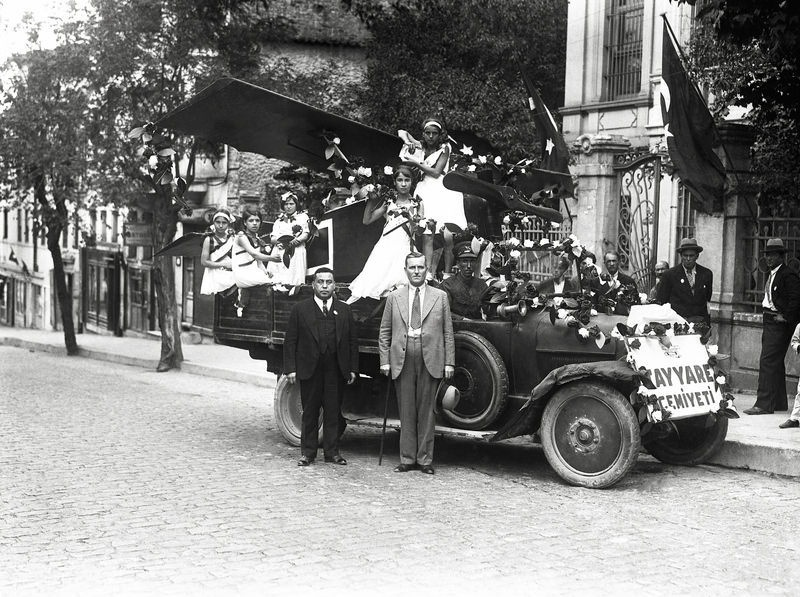 If you recently visited Meşrutiyet Caddesi in Beyoğlu, you may have walked past a curious exhibition at the Istanbul Research Institute. Housed in an old Istanbul building constructed by the architect Guglielmo Semprini in the 19th century, the institute is described on its website as "the second significant step in the wide spectrum of culture and arts projects. Since its establishment in 2003, the Suna and İnan Kıraç Foundation has been pioneering in the fields of culture, arts, education and healthcare." Dedicated to exploring the history of a city that has served as the capital of the Roman, Byzantine and Ottoman Empires, the institute's aim is to search for "traces of civilization from the center towards the periphery, focusing on the cultural structure and the human profile, including Byzantine, Ottoman and the Republican periods of Istanbul." Its new exhibition, "The Republic in Istanbul: Scenes from a Celebration," (open until Jan. 9), nicely exemplifies the continuous exploration of Istanbul's identity throughout the ages. 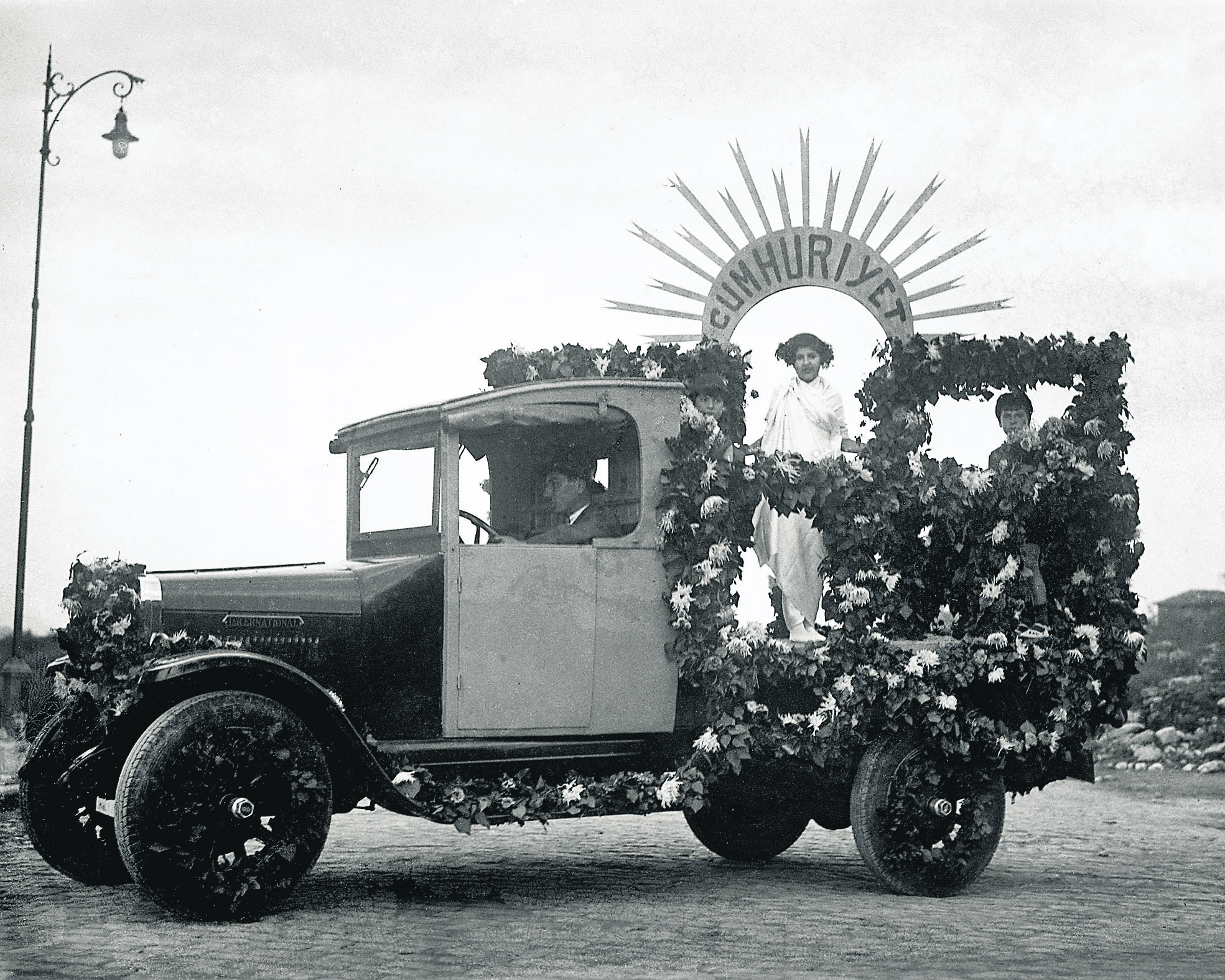 "Republic Day celebrations in Istanbul would begin several days in advance during the early Republican period," the exhibition program reads. "Flowers would be laid at the Republic Monument in Taksim; government agencies, private institutions, houses, shops, boats and trams would be decked with flags and banners." The exhibition meticulously documents details of this ceremony with photographs showing boy scouts of Beşiktas Şark High School marching in Beyazıt on Oct. 29 alongside a photograph of a car bearing the sign of the Association of Grocers, all attending the ceremonies as representatives of their institutions. Cars decorated with signs of the association of candy and candied tahini and tahini helva producers are also there, according to another photograph.

"On the morning of Oct. 29, at around 10 a.m., a band as well as gendarmerie and police units would greet the visitors of the governor of Istanbul in front of the Governor's Office on Babıali," the exhibition program explains. "First veterans, military units, military schools, tanks, and the police would proceed with the marches the band played. Next, a carriage decorated with flowers would arrive. Dressed in a white dress, a young girl in the car would hold a sign that read 'Cumhuriyet' [The Republic]; she would be surrounded by other young girls in red dresses." 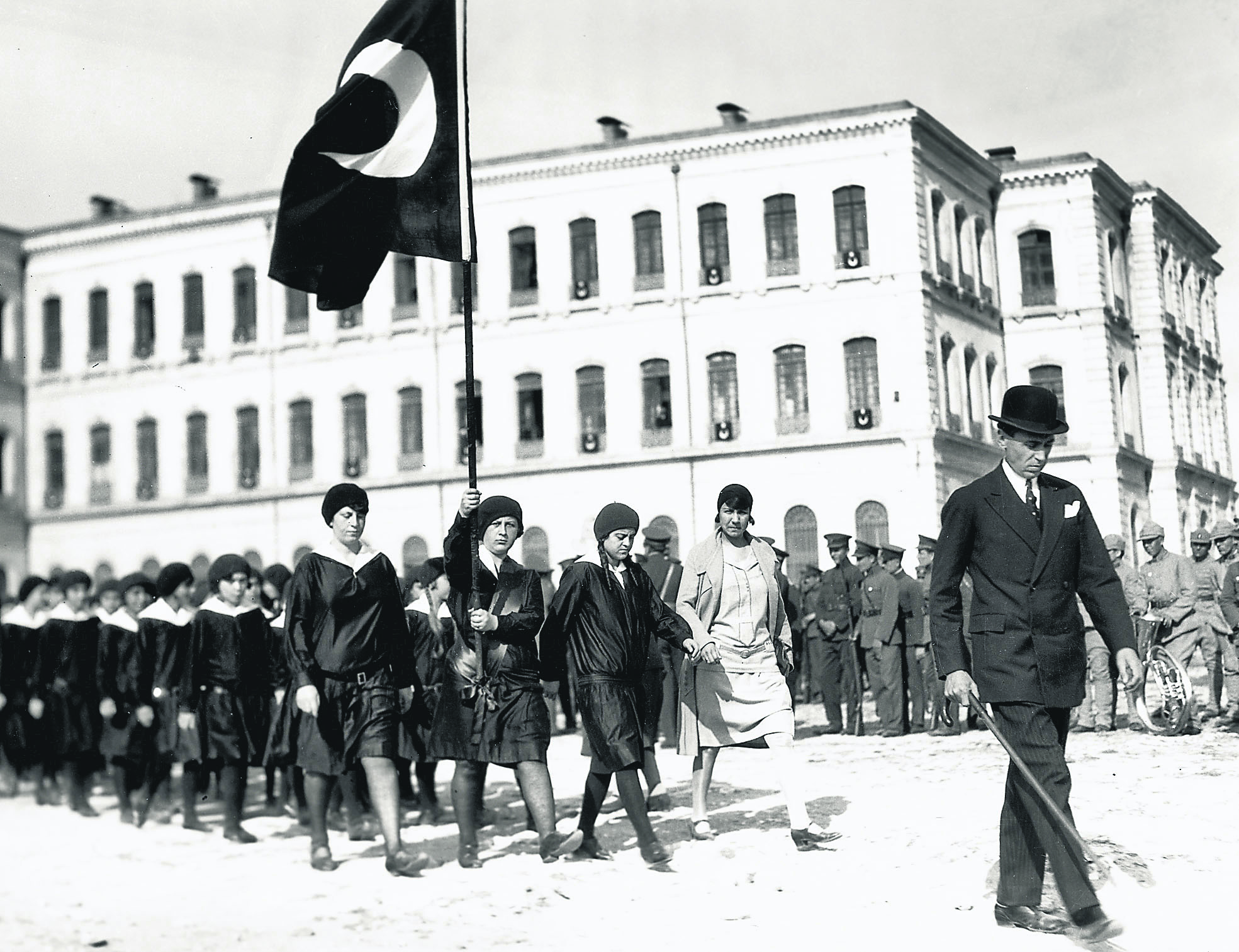 Besides its long term project exhibitions, the Istanbul Research Institute also aim to organize short term shows every year to commemorate Mustafa Kemal Atatürk and the Republic, according to the Institute's Gülru Tanman. "This year the series focuses on the Republic Day celebrations," she told me. "Our founders Suna and İnan Kıraç handed over to the Suna and İnan Kıraç Foundation their photography collection, which we keep at the institute for the use of researchers. With regular purchases the photographs has now reached the number of more than 155,000, spanning from 1850s to 1960s."

I asked Tanman about what these pictures tell us on the young republic's idea of itself and its aspirations. "They reflect the new regime that was expediently constructed fro

m the second quarter of the 20th century onward, and the speed of social transformation shows us the hankering of people for a new identity," she explained.

The exhibition features photographs of boy and girl scouts with their horns and trumpets alongside firefighters and students of schools for higher learning. I learned from the exhibition program about how the Mehter janissary band started joining the procession from 1931 onward and about the trajectory of the procession after leaving Beyazit Square. "The participants would march past the crowds on Yeniçeriler Caddesi, Divanyolu, Alemdar Caddesi, Sultanahmet, Sirkeci, Reşadiye Caddesi, and Galata Bridge, climb up Şişhane Hill, reach Tepebaşı, and access Taksim Square via Istiklal Caddesi. The procession would end at Taksim Square."

"These grounds were to become the scene of frequent visits of national and international guests and national day celebrations. Nonetheless, this space proved to be insufficient and the razing of the Artillery Corps Barrack, an Ottoman remnant that dominated the square as well as the re-zoning of the land beneath was frequently brought up on the agenda. Rather than the historic peninsula, which reflected Istanbul's Byzantine and Ottoman identity, it's not surprising that the state chose the Taksim area of Beyoğlu to create a modern, new identity with its apartments, shopping centers and entertainment arcades where the first attempt of urbanization was applied. It wanted to commence its social mobility in the capital with the spatial transformation of Taksim."

In 1936 the famous architect and urbanite Henri Prost was appointed as per the request of the city administration to come up with Istanbul's city plan.

"Prost first tried to re-arrange Sultanahmet Square, then he tackled Cumhuriyet Square after some impossibilities entered the picture," Tanman said. "He recommended that Cumhuriyet Square become the public's new ceremony and gathering grounds. He proposed the Artillery Corps Barracks be replaced with a terrace that opened onto the square with Gezi Park, a promenade park behind it. The spatial transformation of the square continued until the completion of the Atatürk Culture Center in 1969."