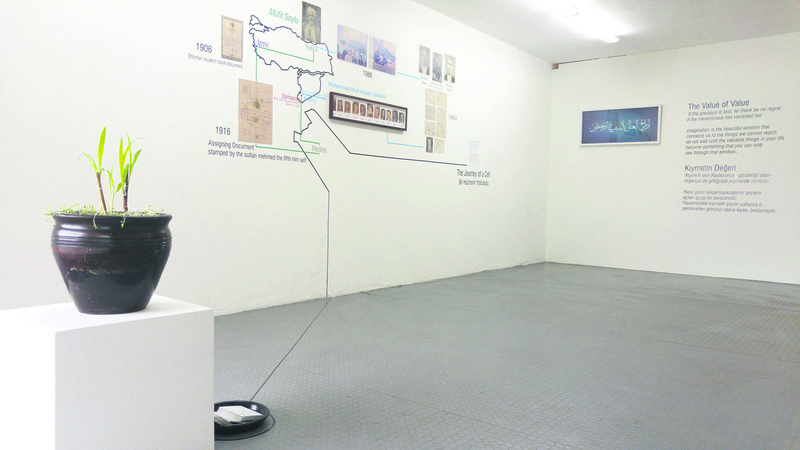 Istanbul's art scene is vigorous, colorful and widely diverse. Proto5533 is presenting ‘The Value of a Cell,' an exhibition of three works by the Syrian artist and curator, Ghaith Mofeed, who has been living in Turkey since 2012

What is the value of value? The moment when we truly realize the real value of what we have in terms of what we are actually gaining and loosing. Proto5533's new exhibition, which will run until Nov. 30, collected works by Syrian artist Ghaith Mofeed and represents the result of Mofeed's one-year research on six generations of his ancestors' journey. 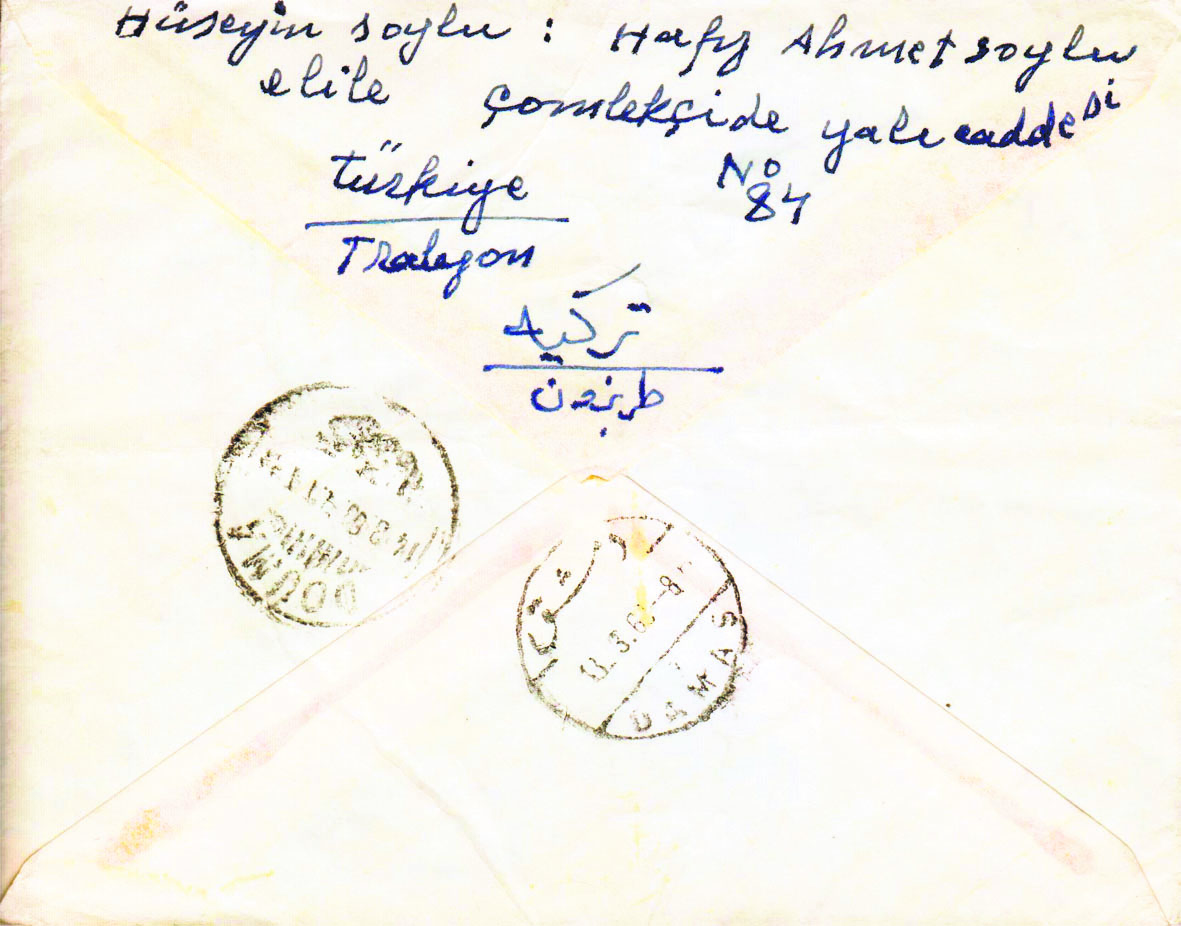 The first work, "The Value of Value, 2015" is a computerized version of traditional calligraphy, while the second work, "Beyoflu," is simply a pot filled with earth from Istanbul's Beyoğlu neighborhood with seeds planted in it from the Of district of Trabzon in the Black Sea region, where some of Mofeed's ancestors lived. 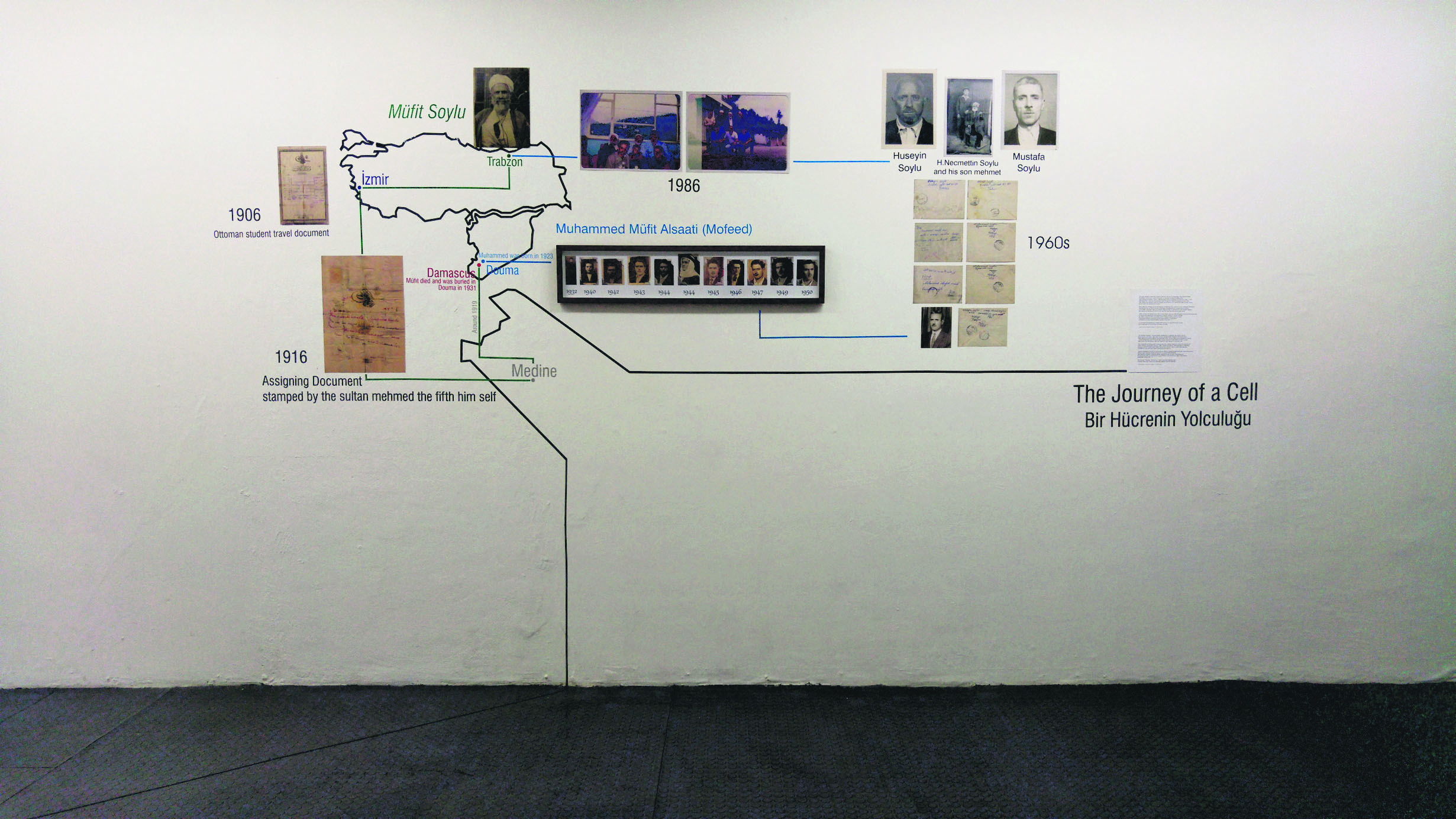 The centerpiece, "The Journey of a Cell, 2015," is a wall installation, showing the map of a journey of two men - the son of a counselor to the Ottoman Sultan Abdülhamid and his son, yet like Mofeed has mentioned in previous interviews, the significance of the piece does not rely on these men's specific journeys, but the whole human journey, which is still ongoing today. We caught up with the young artist to discuss not only his art, but also his own journey - from Syria to Turkey, and his ongoing journey in Istanbul's art scene.

Daily Sabah: The main piece displays the journey of two men. What is the significance of these men, "cells" and their journey?

Gaith Mofeed: These two men, my ancestors, had a long trip. The first one left from Trabzon and ended up in Damascus, and 70 years later the second left, going back to the same point his dad left from. When I was in the place where both of these cells were, walking along the same road, breathing in the same air, I felt how valuable this whole journey of ours is, and felt that I am the one who's now able to speak in the name of all my family and share their story, since no one speaks Turkish after my great grandfather, except me. It is not about the significance of these two men or their journey, it's about what we are living right now or the journey we made, and many others are still making today, from Syria to Turkey. Perhaps the significance is that journeys like ours will continue to go on, and in turn, will keep growing and producing more cells.

D.S.: The works evolve around value, loss and migration. How has leaving Syria and settling in Istanbul shaped your work? When you look back, is there a significant difference between what you used to create and the outstanding themes in your early works when you were in Syria, and now here in Istanbul?

Mofeed: Leaving Syria and settling in Istanbul shapes your whole life. Living, migration, losing loved ones, and having hard times where you doubt your life will get better again, all of that makes you realize the real value of the things around you. I had the first work, "The Value of Value," in my head for a long time, since I was in Syria, and always wanted to show it and express it to others. While working on my project I was able to engage the value with the journey of my grandfathers after living the same trip and feeling its value. Living these experiences and moving from one life to another made me be able to express my work in a lot of ways, and expressing this in my work seemed like the best outlet to do so. I started my career as an artist after entering the art industry here in Istanbul and the significant difference that I see now, is between my whole past life and the one I am living right now.

D.S.: Istanbul has a fairly diverse art scene. What were the ups and downs of being a foreigner and an immigrant in the art scene in Istanbul? And especially since you're a young artist, was it hard to find a place in the art community?

Being a foreigner is not a problem in Istanbul. I believe that speaking Turkish is the thing that changes your situation. The first year for me was harder than other times. I had several jobs but was not satisfied or happy until I came into the art industry. One year was enough to learn Turkish and be able to make important decisions. I started working in the industry with Protocinema as a production assistant, marking the beginning of my career. Life in general will always have its ups and downs, but at first while in Istanbul, being alone and not speaking the language was tough. I started working on my personal project a year ago, and then everything started to become clearer in my head upon my initializing the research of my in-depth family history.

D.S.: How has the exhibition been received, especially by foreigners in Istanbul?

It had a lot of interest from all walks of life, especially those who are interested in history and had questions about migration and immigration. It was active in making others question the real value of the things they have, and also made them curious about digging into their own family's history.

Ghaith Mofeed, who will hopefully become a permanent asset in the Turkish art scene, is a Syrian living in Istanbul since 2012 and has worked for several Istanbul and international art organizations, including Protocinema, RLV Projects, Paradise Row, Istanbul Biennial and the Moving Image art fair.
RELATED TOPICS