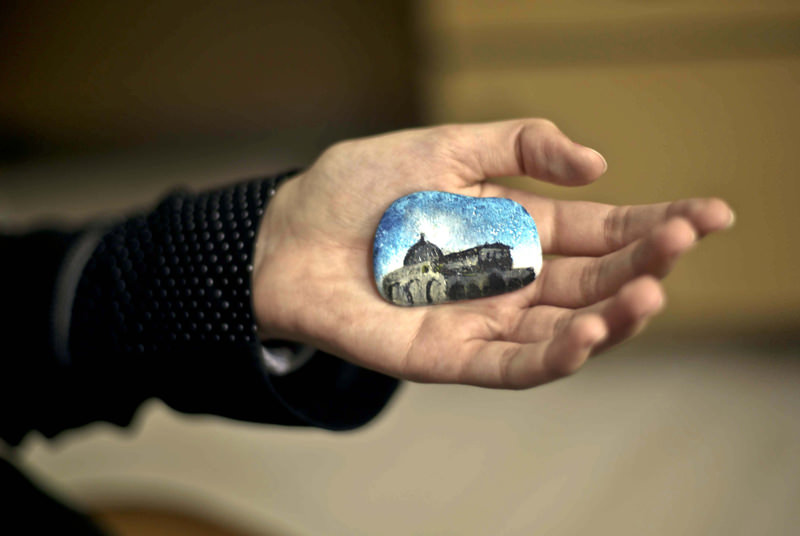 by Anadolu Agency Jan 05, 2016 12:00 am
Gazan Emell al-Kehlut turns into works of art stones which have become the symbol of Palestinian resistance to Israeli occupation. The young painter immortalizes the struggle of Palestinians by painting the intifada in Jerusalem and West Bank. Speaking to Anadolu Agency (AA), Kehlut said she wants to "support the uprising in Jerusalem and the West Bank against the Israelis with her paintings on small stones." According to Kehlut, the stones are not just weapons to counter Israeli tanks, aircraft or bullets: "On the contrary, we give life to the stones through the art that we apply on them," she said.

While painting a picture of Al-Aqsa Mosque on one of the stones in her workshop, Kehlut explained where she got the idea to paint on stones: "Stones are important for the Palestinian cause, and they have been a symbol of Palestinian resistance against Israel's cruelty. For me, the stones are not non-living objects but they are a way to make Palestinian people's uprising heard throughout the world. I wanted to bring my own uprising with art." Kehlut paints people and the scenes that she is affected by during uprisings. People who see her stones are surprised at first but then moved by the reality.

The young artist has been drawing and painting since her childhood. She paints on paper, canvas and stones with eggs, make-up products and coffee. In her workshop, portraits of well-known figures, including former Palestinian National Authority President Yasser Arafat, stand out. However, Kehlut complains that Palestine lacks institutions that can display and support her art. Israel, which was established on the territory of Palestine in 1948, has been occupying East Jerusalem and the West Bank since 1967. There are approximately 200,000 Jewish settlers in East Jerusalem and 400,000 Jewish settlers in West Bank. According to international law, all Jewish settlements in these areas are considered illegal. Moreover, the Gaza Strip has been under blockade since 2006. The wall that Israel built also hinders Palestinians living in the West Bank from entering Jerusalem.
RELATED TOPICS