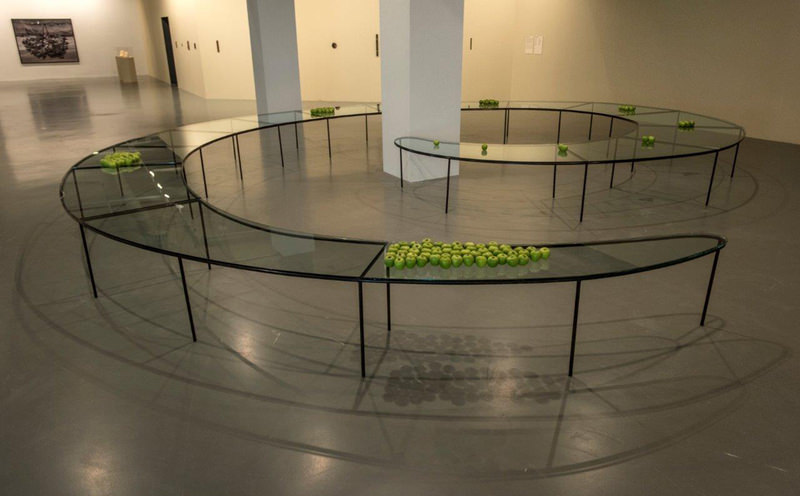 Istanbul Modern's first major exhibition in 2016, "TILL IT'S GONE: An Exhibition on Nature and Sustainability," presents a selection of artists who focus on nature and ecological issues in the concept of sustainability

Istanbul Modern's first exhibition in 2016, "TILL IT'S GONE" is hosting 20 artists and art collectives from around the world to present work that offers new awareness regarding our interpretation of nature and the interaction we have with our ecosystem. The exhibition will run until June 5.

Defined as a "manifestation of longing to be in nature for a habitable world and a sustainable ecologic balance" by the curators, the exhibition aims to bring solution-focused interpretations and insights regarding sustainability and to reinforce the interaction between people and nature and the ecosystem through art.

The title of the exhibition is from the chorus of Canadian singer-songwriter Joni Mitchell's song "Big Yellow Taxi:" "... That you don't know what you've got 'til it's gone. While the chorus emphasizes that the value of nature will not be understood until it's gone," the exhibition includes pieces that express the essentialness of nature in life and what can be done before it is too late. The popular song, which still continues to be covered, represented a generation that was becoming ecologically aware of the radical changes affecting the world and, accordingly, the curators note that artists around the world deserve special attention with their interpretations regarding ecological awareness and sustainability. Therefore, the exhibition is dedicated to all new perspectives on current environmental problems and the '68 generation, which included Mitchell, contributed to by increasing awareness of the environment.

Bafta emphasized that with the ambition to improve and gain power, what have done to this earth has never been done by any other species or nature. "It seems like neither climate summits nor any global political initiatives can find a solution to this predicament we have caused for ourselves. Therefore, we need artists to turn superficial and insincere perspectives regarding our relation with nature and for protecting it inside out. Moreover, I think the staggering and curative power of art will be good for all of us," Bafra said.

Istanbul Modern's international art consultant, Colombo, said that sustainability in depth and the urgency of a new approach to our interaction with nature must be considered when there are various news items regarding air pollution in big cities in the world and nature-related disaster news circulates on a daily basis. "The artists included in the exhibition build an inspiring dialogue through their works and between us and themselves. Our subject is so extensive that we hope it can be a drop in the new awareness we hope will become a norm in the next few years," Colombo said.

Istanbul Modern launched the preliminary program for the exhibition on Dec. 23, 2015, which features ikonoTV's "Art Speaks Out," an international video program exploring environmental issues that premiered in conjunction with the U.N. Climate Conference COP21. The video can be viewed in the exhibition hall. The program includes 57 international artists, including Ahmet Albayrak, Kerem Ozan Bayraktar, Begüm Yamanlar and Müge Yıldız from Turkey and their pieces as video art, silent documentaries or experimental films on global warming, urbanization, carbon emissions, the destruction of green areas and desertification. 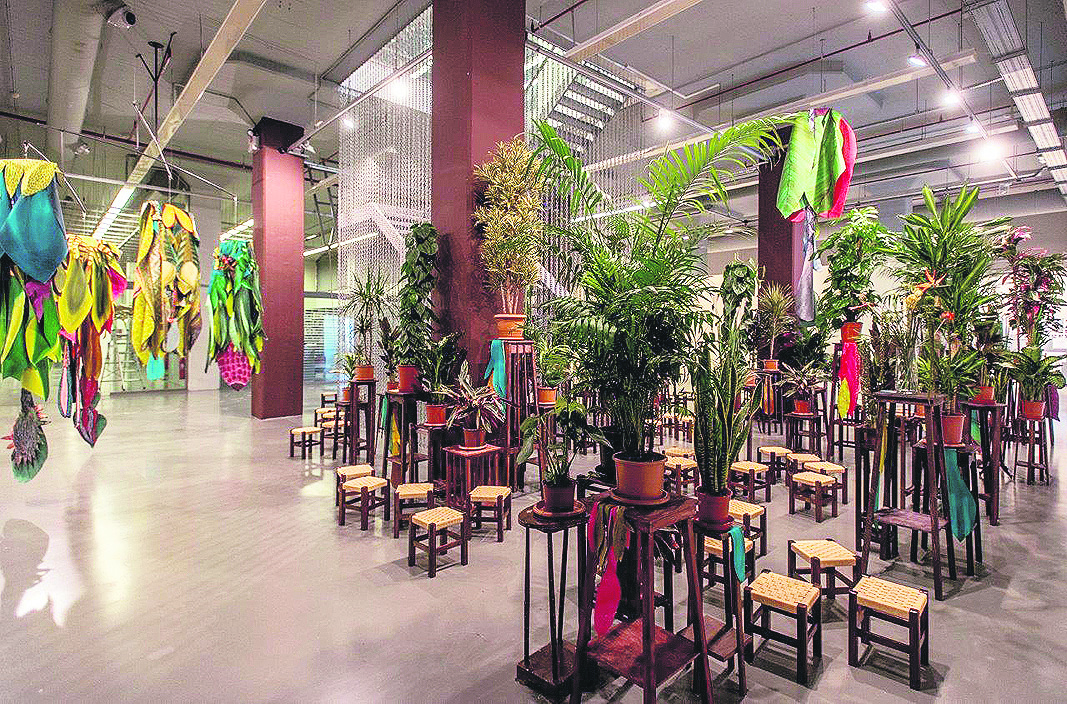 Istanbul Modern's international art consultant, Colombo, said that sustainability in depth and the urgency of a new approach to our interaction with nature must be considered when there are various news items regarding air pollution in big cities in the world and nature-related disaster news circulates on a daily basis. 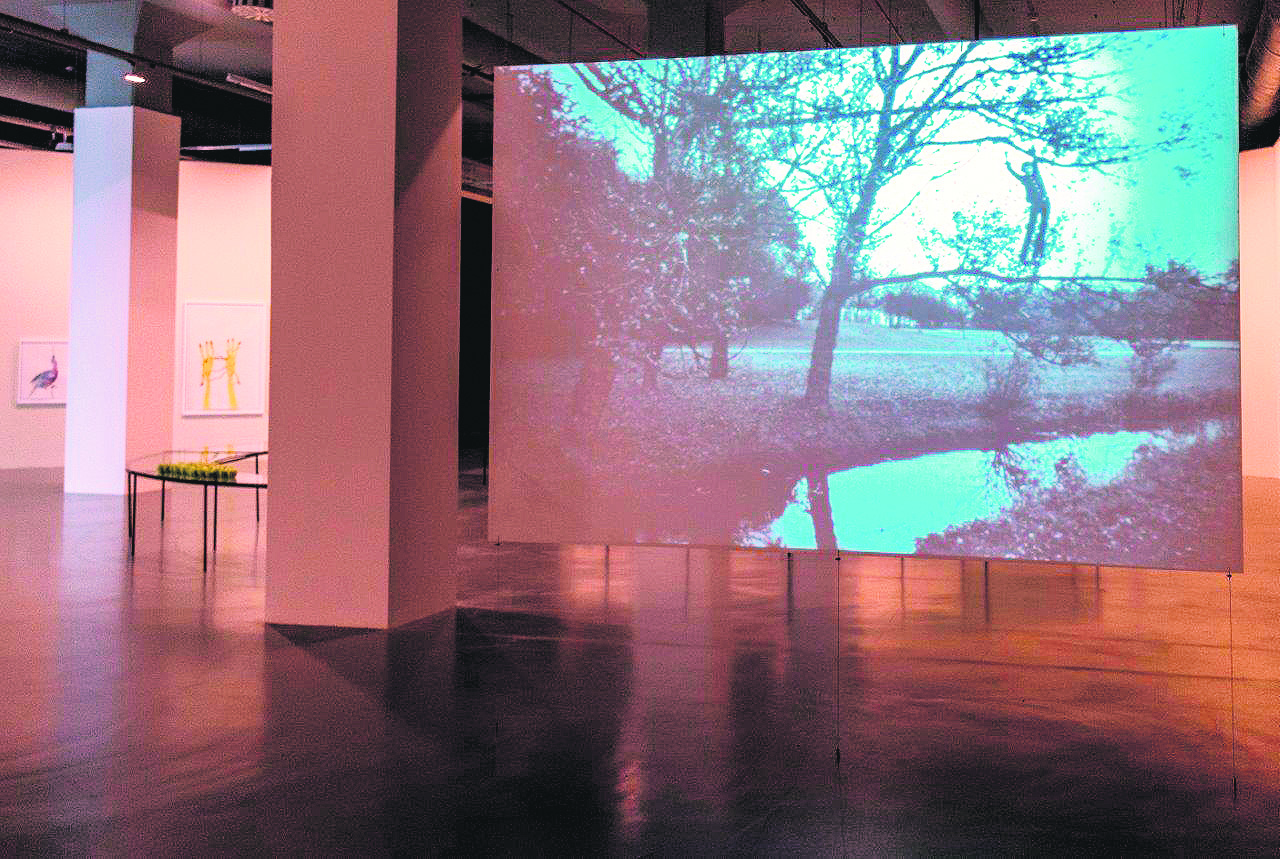 Another work featured is "Stone Library" built by Alper Aydın, a young follower of land art and environmentalist art on the invitation of the curators, which he built using stones from various regions in Turkey representing the collective memory of different societies and cultures of the region.

Elmas Deniz's "Manless," which questions the increasing "beautiful" and "untouched" nature experience, is an artistically altered version of a drone recording the incredible nature of the Southern Caucasus and the accompanying drone-bird hybrid statue, which questions the perception, representation and gaining power over nature of humans and human technologies.

Selected as the main piece of the exhibition, Greek artist Maro Michalakakos' photo of a flamingo in which its leg is tangled around its neck is a metaphor for a world damaged because of the inefficiency and mistakes of humankind. His watercolors are reminiscent of scientific bird descriptions of the 19th century. Camila Rocha, who was invited by the curators, designed a garden to enjoy, which includes live, artificial and specially produced plants with inspiration from her country of Brazil, and philosophy regarding nature. "Sefatorium," set up in the lower floor's foyer will host meetings where different views regarding nature and sustainability can be discussed.

Events in the program

On the Jan. 13, the first event of "TILL IT'S GONE" took place and the curators talked about nature and art with participating artists who arrived in Turkey for the opening. The artists discussed the conceptual framework of the exhibition and their own artistic practices reflecting various views regarding the world and the environment. Speakers included Bingyi, Jasmin Blasco, Michalakakos, Annie Saunders ("Holoscenes") and Canan Tolon and it was moderated by Bafra and Colombo.

Istanbul Modern's Education and Social Projects Department will organize a special event, "Nature-Friendly Art Workshops," for children ages 4 to 12 that focuses on getting to know nature and being inspired by it. Children will examine nature more closely and offer ideas for a better future. There will be three events, "Tissues under my Magnifying Glass," "The Tree of My Dreams" and "Environmentalist Ideas Guide." Özden Çetin will also donate a 300-year old olive tree to Istanbul Modern.

Istanbul Modern's Cinema Department will present a film program, "The Beauty and the Beast," consisting of films that feature animals in the leading roles from May 5 to May 15. The program includes films with animals as characters or themes that belong to different times, types and cultures. These films represent the domestication of an alien world and our instinct to look at something unknown, no matter how familiar it is. While humankind benefits from other animals, has damaged and even destroyed them for its own good, it shows that empathy can be established with animals at the same time.

Istanbul Modern's gift shop will offer, along with the exhibition catalogue, special products and publications regarding the artists in the exhibition. There will be discussions with artists, panels and meetings with people and institutions that are striving to create environmental awareness.

A selection of posters, postcards, magnets, notebooks, bookmarks, bags, pillows and iPhone cases that have the main visuals of the exhibition by Michalakakos will be offered in the gift shop along with notebooks, puzzles and specially designed objects pertaining to the concepts of nature and sustainability. Along with books and catalogs about the artists, the shop will also offer publications on the relation and interaction between art and nature.
RELATED TOPICS