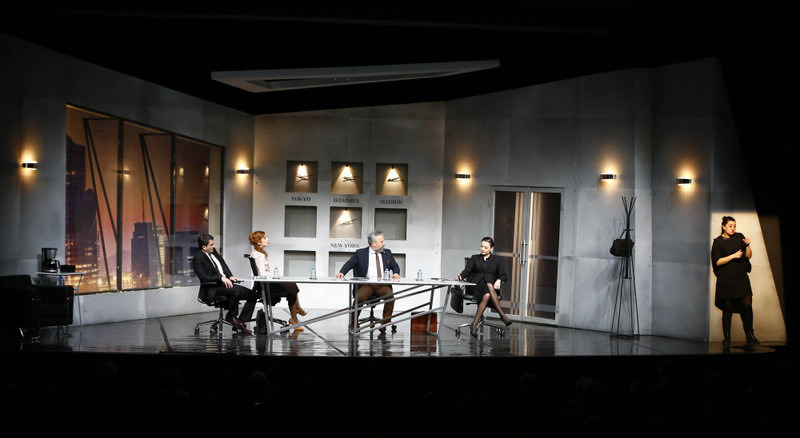 by Anadolu Agency Jan 25, 2016 12:00 am
The Ankara State Theater and the Vocal Description Association will perform Jordi Galceran's play "The Method" with support for the visually and hearing impaired as part of a series of cultural and artistic events. Directed by Sinan Pekinton, the one-act black comedy, starring Cüneyt Mete, Deniz Gökçe Yersel, Ünsal Coşar and Nur Yazar, is being presented to the audience with both vocal descriptions and sign language. The play, which premiered with sign language on Jan. 23, drew great attention from both visually impaired and hearing impaired drama lovers.

Before the premiere of the play, the audience toured the stage and the theater hall to become familiar with the equipment used in the play. Headphones were distributed to the visually impaired audience members and a crew in a cabin next to the stage offered vocal descriptions of the play, while a sign language interpreter communicated the dialogue to the hearing impaired audience members.

Speaking to Anadolu Agency (AA) before the premiere, Vocal Description Association President Kenan Önalan said they are working to make cultural events more accessible to the visually and hearing impaired through various projects.

One of the association's first projects was to offer vocal descriptions to films screened in cinema halls; now they are undertaking a more extensive project to make plays accessible for visually and hearing impaired art lovers. "Visually and hearing impaired people are kept out of such events. All they want is to go to a theater hall and watch a play like anybody else. Today they will be able to access a play in a theater hall for the first time," Önalan said. Stressing that the number of accessible cultural events has to increase, Önalan said the Family and Social Policies Ministry and the Culture and Tourism Ministry are undertaking various projects for visually and hearing impaired citizens. However, Önalan said the private sector needs to be more supportive of their mission. "If we have more support, films, plays and operas will be described with both vocal descriptions and sign language," he added.

Onur Yılmaz, a board member of the Vocal Description Association, said a play was previously performed with vocal descriptions in Istanbul but that this is the first time a play is supported with both vocal descriptions and sign language. Yılmaz added that "The Method" is watched by the visually and hearing impaired people as well as their companions. "We pioneered these events as an association. We showed people that it is not impossible to make cultural events accessible to all people. We hope that other institutions will support us in the future," Yılmaz said.
RELATED TOPICS