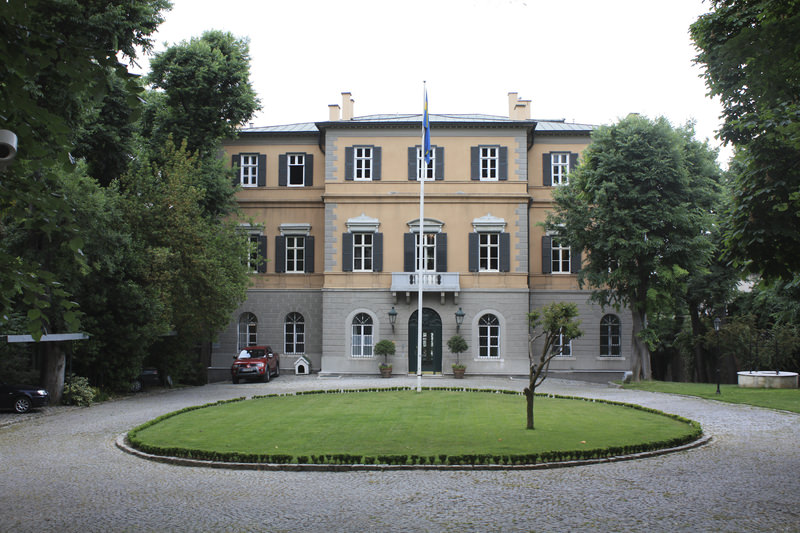 The Sweden Palace, pictured above, is the main building of the Swedish Consulate in Istanbul.
by Arda Sayıner Mar 05, 2016 12:00 am

Built in Beyoğlu district, the Consulate of Sweden in Istanbul recently hosted a coctail for the !F Film Festival, where Daily Sabah was informed about the Swedish values of hospitality and kindness as well as cultural traits, tourism opportunities and Swedish cuisine

The consulates in Beyoğlu have always intrigued me. With their historical buildings, gardens reminiscent of European palaces and different cultures, embassies and consulates always seem like a dreamland to me. I had the opportunity to visit one of them last week. I attended a cocktail for the !F Film Festival at the Sweden Palace, which is the main building of the Swedish Consulate in Istanbul. This work-of-art palace was built in 1880. The new Tarzan of Hollywood, Alexander Skarsgard, was visiting Turkey because of the festival as well. This tall, blonde and handsome man is the leading actor of the movie "Tarzan," which is set to debut in the United States in July. We had a long conversation with Swedish Consul General Jens Odlander who invited me to this event. I learned many new things about Sweden, which I want to share with you. The consul general is a very experienced, charismatic and intelligent diplomat who loves Turkey. He came to Turkey after working in Africa for many years. Aside from what he has read and learned about Turkey through his experience, he really came to admire Istanbul after living here. He is very interested in Ottoman history as well. The relations between Sweden and the Ottoman Empire began in the 17th century. Moreover, in the past, the Ottoman Empire even signed a treaty with the Kingdom of Sweden against the Russian Empire.

Odlander described the common features shared by the Swedish and Turkish people as being both very warmhearted and shy at the same time. He said the culture of offering and hospitality is similar in both countries, and explained that people can actually take fruits that are visible from the street or on farms in Sweden without having to receive any permission, even if the farm belongs to someone else. Moreover, this right is even protected by law. So nice, isn't it? His favorite food in Turkey is the doner kebab, and he said some pizzerias and restaurants in Sweden have recently begun to include doner meat as a pizza topping. He added that Swedish cuisine has a different version of Turkish dolma. Odlander suggested anyone traveling to Sweden try wild fish and mushrooms; however, I told him my favorite Swedish foods are the meatballs and lingonberry jam that are only served in Ikea stores in Turkey. Hearing this, Odlander immediately gifted me a jar of lingonberry jam.

Unfortunately, there are no Swedish restaurants in Turkey. Nevertheless, Swedish Coffee Point and Mum's Coffee are where you can enjoy Swedish coffee in Istanbul. For beer lovers, there are hundreds of different kinds of beer in Sweden where you can even prepare one according to your own tastes. However, the actual Swedish surprise is the wine grown in the south of the country. Although located in a cold region, the Swedish are also very high-brow with their wines. Definitely taste them when you visit Sweden.

Although Sweden is famous for its natural beauties, what it does in the field of programming and technology is equally incredible. Did you know that Candy Crush, Minecraft, Ericsson, Skype, SoundCloud and Spotify are all the programming wonders of Swedish engineers? Likewise, do you know H&M, Ikea and Volvo are Swedish, not to mention the world-famous band Abba? The bridge in the famous Danish TV series "Bridge" is also in Sweden.

As for the Sweden Consulate in Istanbul's cultural attache, Suzi Erşahin, whom I met at the cocktail party, is a genuinely classy lady. She is well-educated, elegant and very willing to present Sweden in all of its wonder. Fluent in Turkish, Suzi told me about the cultural and touristic activities of the consulate, and we met the following day to have a more detailed discussion. There is a research center behind the consulate building that takes you to that magical world of Europe. This place is a very valuable library and guesthouse at the same time. There are 10,000 books related to Turkey and the Middle East in the library. and you can find unique books that shed light on Ottoman history as well as original oil paintings on the walls. Swedish researchers have the opportunity to visit Turkey via the sponsorship of their country and conduct research into the history and culture of the region. You may consider this more as a type of government scholarship or fellowship.

In addition, the consulate hosts many events focused on fashion, business, art and cuisine. In fact, there was even a training session at the consulate on how to bake and make gingerbread houses held during Christmas time. The guests learned how to make gingerbread and created houses from dough. Sounds fun, doesn't it?

They presented me with a book titled "The Sultan's Procession," one of the publications of the consulate's research center. The book includes important commentary on the Ottomans and depictions inspired by these reflections narrated by one of the most important statesmen of the Kingdom of Sweden, Claes Ralamb. In 1657, Swedish King Charles X Gustaf sent Ralamb, his envoy, to Istanbul to visit Ottoman Sultan Mehmed IV and the Sublime Porte to promote good relations between the Kingdom of Sweden and the Ottoman Empire. During his stay in Istanbul, which was for around nine months, Ralamb kept a diary. Directly after his return, he published it in English and Swedish, where you can find interesting details of everyday life in the Ottoman Empire. The books include 121 small pictures in watercolors of men and women in period dress acquired by Ralamb, which render visual life to Ralamb's texts. The most important pictures are 20 very large paintings depicting an imperial procession of Mehmed IV and hundreds of his courtiers parading through the streets of Istanbul. It is a very interesting book.

In spite of being famous for its northern lights, husky snow safaris and ski resorts, Sweden may be even more beautiful than you think in the spring. Stockholm is the unique history and art hub of northern Europe. The Vasa Museum, the Royal Palace, the City Hall, the Abba Museum and the Gamla Stan region are among the must-see places. Congratulations to Odlander and his team for the valuable work they have done in Turkey. I suggest all of you visit Sweden at the first chance you get.