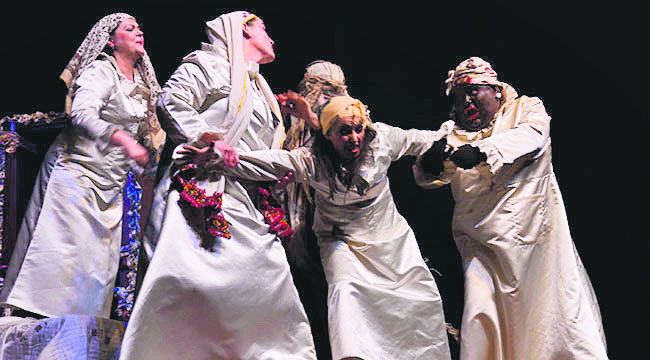 Organized by State Theaters, the third edition of the Bursa International Balkan Countries Theater Festival will kick off tomorrow. The plays featured as part of the festival will be staged at the Ahmet Vefik Paşa Stage and the Feraizcizade Chamber Theater. The festival will open the curtains with the Istanbul State Theater production "Erkek Arkadaş" (Boyfriend) and will feature six international, two city and three private theater productions until March 27. The Third Bursa International Balkan Countries Theater Festival will host the Eskişehir Metropolitan Municipality and the Bakırköy Municipality's city theaters along with the Istanbul State Theaters and national and private theaters from Macedonia, Slovakia, Bosnia-Herzegovina, Romania and Bulgaria.

Speaking at the press conference, the Bursa State Theaters Director Ömer Naci Topçu said the festival offers an opportunity for theater lovers to watch well-known theater companies on stage. Toçu underlined that they gave priority to theater companies that contribute to the development of the Balkan theater the most. "As a part of the festival, private Turkish theater companies such as Tiyatro İntakt, Yabancı Sahne and Kara Kabare will also stage their plays along with theater companies from the Balkans. For the first time this year, a total of four workshops will be held as part of the festival. Adonis Filipi from Albania will offer a workshop titled "Improvisation based on movement in acting" on March 13-14, and Uçan Eller Kukla Evi will hold an exclusive workshop for children under the title of "My first puppet" on March 19-20. On March 23, Celal Eldeniz will share his experiences on "Voice and Breath," while Burcu Hallaçoğlu and Serap Uluyol will offer training on "Imagination and body." Furthermore, various additional events will be organized to celebrate World theatre day on March 27.