Children with Down syndrome to perform in a musical play 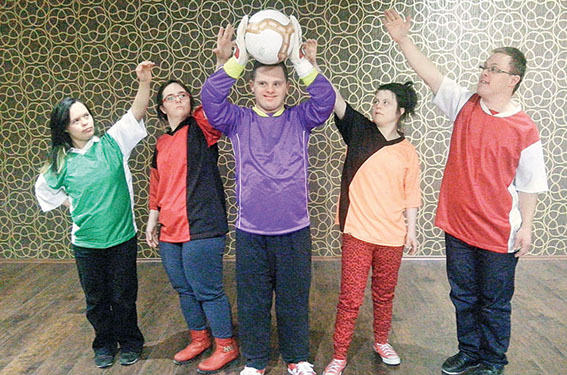 Adapted to the stage from British children's book writer Sophie Smiley's critically acclaimed novel series about a boy with Down syndrome and his football-mad family, the musical "Canım Ailem" (My Dear Family) will premiere in Istanbul tonight at 8:00 p.m. at Kağıthane Municipality's Sadabad Stage.

The play which is supported by the Education and Protection Foundation for Down syndrome and Mentally Challenged (DOSTEV) and the Justice and Development Party's (AK Party) Şişli District Branch is written for the stage by Halil Doğan and directed by Arzu Oygur Doğan. The play will premiere on World Down Syndrome Day and aims to raise awareness about the genetic disorder by featuring both children with Down syndrome and professional actors on stage side by side. Speaking to Daily Sabah, Doğan said that he decided to initiate the project after listening to author Smiley at a panel session at Bağcılar Palace for the Disabled. He said he was very moved and impressed by the way Smiley, who is working with students both able and those with learning difficulties, talked about children with Down syndrome and decided to turn this project into a social responsibility project.

After agreeing on the stage play with Smiley as well as Erdem Publishing which publishes Smiley's books in Turkish, Doğan began working on the script and both the author and the publishing house were pleased with the outcome. The social responsibility project, of which "Canım Ailem" is a part, intends to teach people with Down syndrome various crafts and provides them employment, boosting their morale and confidence. Doğan said that as he is an artist he undertook the artistic side of the project and started with writing the play. He wants to offer jobs to children with Down syndrome in the world of art and said that he will initiate new projects in the future by producing TV and radio programs with people with Down Syndrome. Doğan underscored that they trained Down syndrome people for the stage play and they are no different than professional actors, adding that all they need is extra effort due to their speech difficulties which can be overcame with training. Although the play will premiere in Istanbul tonight, Ankara State Theaters has been staging the play written by Doğan since March 15. "Canım Benim" will tour Turkey with Ankara State Theaters as well as Doğan's production, which will stage the play featuring six actors with Down syndrome on drama stages of municipalities and schools around Turkey.