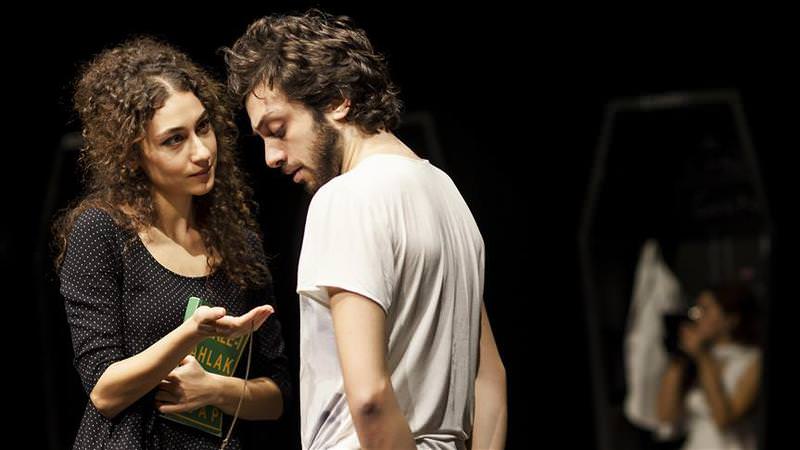 In Istanbul, a local theater has been adapting Shakespeare's plays in a freely translated and modern manner in order to render the plays engaging and relatable to a larger audience.

"There are people who said to me that they were happy to understand a Shakespeare play. This is very precious," Onur Ünsal, 30, says in the foyer area of the four-story theater, decorated mainly in black and white.

Ünsal, who is also a well known television actor in Turkey, is one of the 12 founders of the Moda Sahnesi, a theater based on Istanbul's Anatolian side, in the Kadıköy district.

The group teamed up in 2013. They have since been joined by a number of other actors and actresses.

They had already performed numerous Shakespeare plays, including Macbeth and Othello, with another theater group in Istanbul.

Since 2013, they performed Hamlet and this year they began staging another Shakespeare reference, A Midsummer Night's Dream.

What separates this theater group from the rest is the plain stage decor and namely the modern-day costumes which can consist of jeans or ordinary suits. But, more importantly, it is the text that is not only translated but adapted in a more modern-day language.

Moreover, most of the time in Turkey, Shakespeare plays are performed with an Istanbul accent, i.e. a received pronunciation of Turkish.

But the Moda Sahnesi troupe uses daily Turkish and common phrases and "accepts the audience is there", says Ünsal.

Audiences at Moda Sahnesi can hear different accents, an uncommon occurrence in Turkey.

Indeed, one character can speak in a Kurdish accent - mainly used in southeast Turkey—or with an accent from Thrace – in northwestern Turkey - where H sounds are not pronounced.

Some academics have criticized the group for their use of accents, says Ünsal.

"We do not believe that Turkish should be spoken well or that an Istanbul accent should be spoken [in plays]," he says. "If we are working in the theater business in this country, every accent, or everyone, should be involved."

One of the reasons for such an adaptation is to make people feel the story locally, Ünsal says.

"To explain that this is a story that also belongs to this land," he says: "It is not only a story based on that era's England, this is a story which has been relevant for the last 400 years."

Since 2013, around 70,000 people have seen the troupe's performances annually. Tickets have a tendency to sell out one or two months ahead, says Ünsal.

Lately, the recent deadly terror attacks in the city have dampened audiences' enthusiasm for the theater.

Referring to the March 19 suicide attack on Istanbul's teeming Istiklal Street, Ünsal says: "That day more than half of our audience did not show up. The ones who could make it here were probably the ones who lived close by and did not need to use public transportation."

Moda Sahnesi largely functions as a cultural center. It also hosts concerts, dance and stand-up shows and boasts a cinema.

"Most of this amount, around 90 percent, was loans from banks, and has almost been paid back," he adds.

The theater features 10 plays at a time, two of which are intended for children.

In general, Istanbul's cultural events take place on the European side. But, according to Ünsal, there are around 40 private theaters on the Anatolian side; they united under an umbrella organization called Kadikoy Theater Platform to support community theaters.

As March 27 marks World Theater Day, members of Moda Sahnesi as well as 37 other theaters based in Kadikoy will march on the district's main street.

"I believe independent theaters too should have the opportunity to make theater as their state-funded peers," he adds.

"We are an institution that gives one third of [our profit] to the state," he adds.

Despite economic difficulties Moda Sahnesi will continue to perform other Shakespeare plays but Ünsal does not want to name them before talking with his colleagues.

"We want to complete the entirety of his works here," he says.