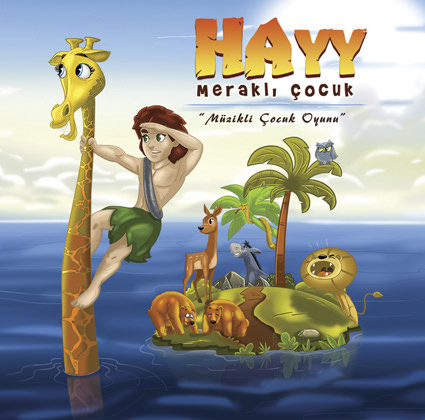 by Daily Sabah Apr 15, 2016 12:00 am
Inspired by the influential 1,000-year-old work "Hayy ibn Yaqdhan," (Alive, son of the Awake) by Andalusian Arab writer, Islamic philosopher and court official Ibn Tufail, the children's musical "Hayy the Curious Kid" premiered last month in Istanbul. The musical event, part of the Sonpeygamber Children's Site sponsored by Albaraka, has attracted about 35,000 children to theaters in Istanbul over the last three months. Produced by Meridyen Productions, "Hayy the Curious Kid" makes its Anatolian premier at Ankara State Theater's Şinasi Stage on April 17, and Prime Minister Ahmet Davutoğlu's wife, Sare Davutoğlu, is expected to be in attendance.

Following performances in Ankara, the musical will set off on an Anatolian tour, inviting thousands of children to join a search for truth. The children's musical, directed by Mehmet Emin of the theater company Tiyatro Greyfurt, recounts the story of Hayy who washed ashore with his boat while fleeing from a cruel grand vizier. Hayy, who is physically different from every creature he observes in this strange land, begins to question who he really is. "Hayy the Curious Kid" manages to overcome all the obstacles of adapting a philosophical work into a children's play and enables children to dwell upon the meaning and merits of being a human as well as the greatness of our Creator.

"Hayy the Curious Kid," which features professional actors, decor and costumes, invites children and their parents to witness the story of a boy who seeks the truth. Under the guidance of Wise Owl, children will meet the characters in plays such as Mother Gazelle, Fearless Lion, Donkey the Prankster, Snake the Trap-Setter and many others and try to find the answers to Hayy's endless questions.

Meridyen Association is an Istanbul-based non-governmental organization that aims to contribute to the creation of a genuine tradition of language and thought by merging the universal heritage of knowledge with social values.
Last Update: Apr 15, 2016 12:47 pm
RELATED TOPICS