Flamenco superstar ready to fire up stage in Istanbul 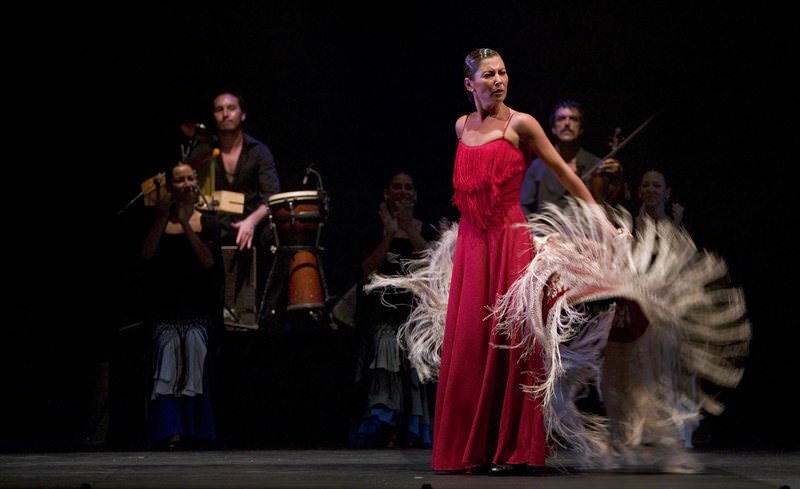 by Daily Sabah Apr 25, 2016 12:00 am
World-renowned Spanish Flamenco star Sara Baras will perform on May 7 at Zorlu Performing Arts Center as part of the Good Music in Town concert series. Regarded as one of the world's best 50 dancers, Baras who has previously performed at prominent venues is ready to enchant Istanbulites with her mesmerizing dance performance.

During her concert at Zorlu Performing Arts Center a crowed dance group an orchestra will accompany the Spanish artist on the stage. Baras started her dance education at the age of 8 at a modern dance school and gained fame in 1989 when she began to share the stage with guitarist Manuel Morao. The artist won the Madroño Flamenco de Montellano Award in 1993 and was chosen as the "Best Female Spanish Dance Performer" in 1999 and 2001. Baras also took the stage as part of Merche Esmeralda's show "Mujeres" and collaborated with Antonio Canales at Gitano and with El Güito at héâtre du Châtelet in Paris. Following her performance with Morao in 1992, at the Seville Expo, the artist starred in New York's art scene and then continued her career as a solo performer.

As a solo dancer, she took part in several tributes to Camarón de la Isla. In 1997, she started her own company, with which she closed the Festival Nacional de Cante de las Minas. The company's first shows included "Sensaciones" in 1998 and "Sueños" in 1999. She appeared in other shows including "Juana la Loca" and "Mariana Pineda." Baras also caught the eye of film directors and was featured in Miki Figis's "Flamenco Women," Javier Balaguer's "Escuela de Seduccion," Carlos Saura's "Iberie" and "Flamenko Flamenko" and Luis Danes's "El Sueno de Eleanor." She also performed Flamenco in "Mission Impossible: 2" with which she had international success. Furthermore, Baras was granted Spain's National Dance Award, Gold Medal of Arts and the Flamenco Hoy Award for the "Best Flamenco Dancer of the Year."
RELATED TOPICS