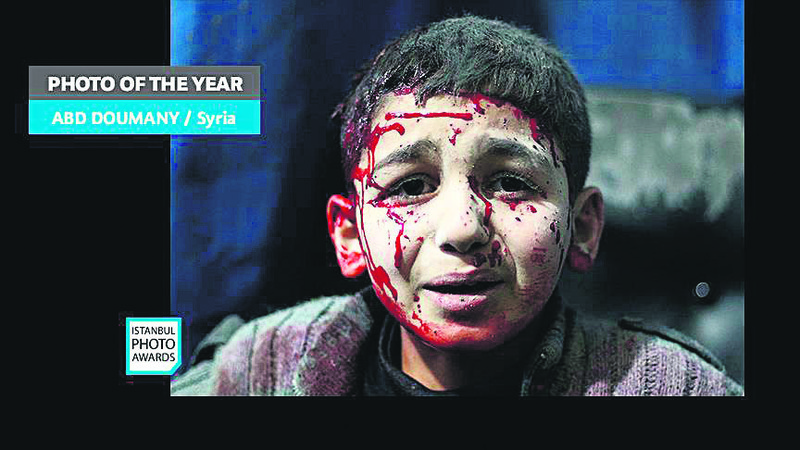 by Daily Sabah Apr 26, 2016 12:00 am
A photo exhibition showcasing photographs which won awards during the second Istanbul Photo Awards will be opened at the Cern Modern Arts Center in Ankara, organized by Anadolu Agency (AA). The exhibition visually encapsulates significant global news events during 2015 and will be officially inaugurated today at 7:30 p.m. AA Deputy General Manager and chief editor Metin Mutanoğlu will give a speech, after which there will be a slideshow presentation featuring the exhibited photos. The photo exhibition will remain on display until May 1.

Sponsored by Turkish Airlines and supported by the Promotion Fund of the Prime Ministry, the second Istanbul Photo Award's "Photo of the Year" award was granted to Syrian photographer Abd Doumany of AFP, for a powerful image showing a deep well of emotion in the eyes of a wounded boy, encapsulating the horror of the last several years in Syria. Sergey Ponomarev's photo titled "Refugees" taken for the New York Times won first prize for "Single News," while Santi Palacios' photo "Lives at Risk to Reach Europe" taken for Getty Images, won the first prize for "Story News."

Ian MacNicol won the prize for "Single Sports" with his photo entitled "Shape of Heart"; Valery Sharifulin was granted first prize for "Story Sports" with the photo titled "The Style of the Warrior"; and Minzayar Oo won the Honorary Award. Sergey Ponomarev, a freelance photographer for the New York Times, also won a Pulitzer Prize for his photo "Refugees" which depicts the tragedy of Syrian refugees trying to cross the Aegean Sea, and was granted first prize for Single News at the Istanbul Photo Awards. A photo taken by Australian photographer Daniel Berehulak, which was chosen as the Photo of the Year at the first edition of the Istanbul Photo Awards, was also granted a Pulitzer. Berehulak's photo portrayed the Ebola outbreak in Liberia.
RELATED TOPICS