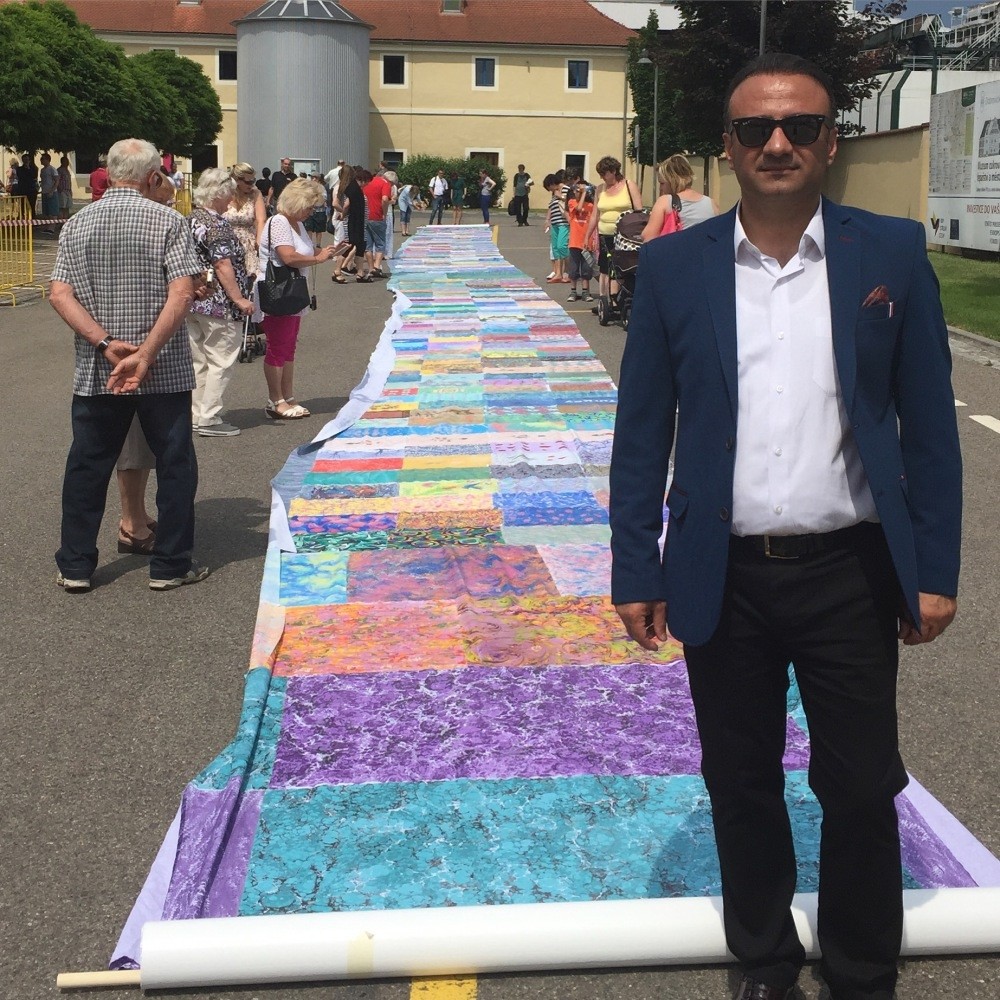 Marbling artist Atilla Can
by Daily Sabah Jun 09, 2016 12:00 am
One-hundred-ninety-one artists from 37 countries broke the world record by applying marbling (ebru) on an 84,864-square-meter cloth in the Czech Republic. Marbling artist Atilla Can told Anadolu Agency (AA) that the marbling on the 84,864-square-meter cloth has earned the right to be in the Guinness Book of World Records.

Can was invited to the Czech Republic to be a part of the Ebru Patchwork Project in which artists attempted to break the record. "The organizers and artists had been working hard on the project to break the world record for the last seven months. It was a tough project that took a very long time, but it was also a very exciting experience," Can said. The world record was broken under the leadership of Czech artists Sarka Duran and Xenia Sulimenko and they contacted many marbling artists both in the Czech Republic and from around the world in order to break the word record. Every artist who worked on the project received special cloths marked with their names. "Marbling artists from all over the world worked on the cloths they received and practiced their own techniques and styles. After they were finished they sent the cloths to the Czech Republic and Duran worked every day to join the hundreds of cloths arriving from all over the world through the mail with a very special technique," Can said. The record attempt took place on June 5 and was observed by a committee, including Can and representatives from the Guinness Book of World Records. The marbling broke the world record by having the most people participating in marbling, as it was created by nearly 200 artists.

Can expressed his happiness to be a part of international projects and continued: "After years of hard work and my efforts, the art of marbling was listed on UNESCO's Intangible Cultural Heritage List in 2014. Since then, I have been receiving invitations from all over the world to become part of various projects. People want to learn marbling, exchange ideas and benefit from our experience." He said that he tries to participate in international events as much as he can and said that he wants to share the details of marbling with those who are interested. "After I achieved remarkable success with UNESCO, people say that I play an important role in cultural diplomacy," he said.

Can also touched on the ongoing wars in different countries around the globe, and said: "We, the artists, have a mission to introduce our art and culture in international platforms and touch people's hearts. If a country invites you to represent your country and culture and people who do not even speak your language say farewell with tears in their eyes, I can say that you are doing your job." Can also said that he is proud to represent Turkey and work as a cultural ambassador and that there is no match to the pleasure he takes from contributing to cultural diplomacy.
RELATED TOPICS