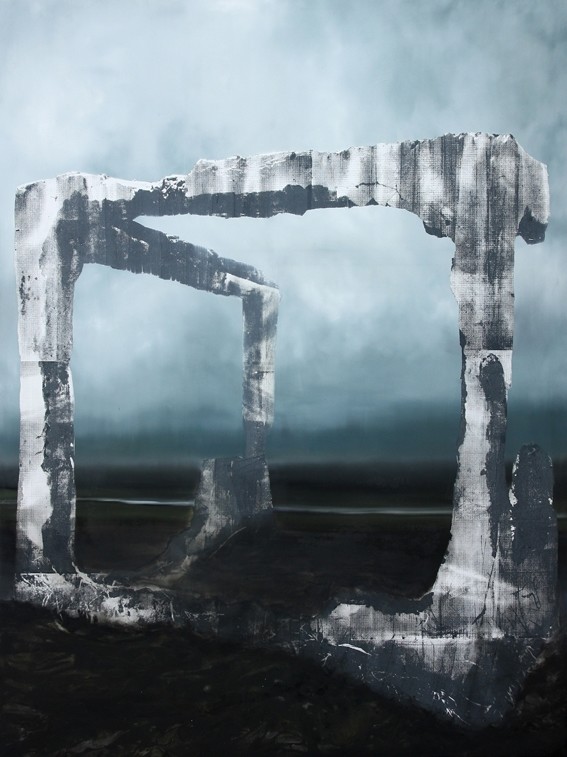 by Daily Sabah Jun 13, 2016 12:00 am
One of Istanbul's new art spaces, the Pill Contemporary Art Gallery, located in an old generator factory in the historical Balat district, has a new exhibition by Danish artist Eva Nielsen, who is based in Paris, France. Nielsen is a former student of Philippe Cognee and Ecole Nationale Superieure des Beaux-Arts in Paris, and she is known for her unique technique with which she is able to create her own artistic language with her oil paintings. Her paintings speak of places abandoned by humankind, where, as she puts it herself, "the human being is banned, only his absence or traces of his presence remains." Mixing a toned down palette with geometric elements taken from brutalist architecture, urban environment or ruins, working on the same canvas with both oil and screen-print, the artist teeters at the threshold of figurative and abstract painting. Nielsen's paintings are constructed by a succession of layers of matter and images: the backgrounds are slightly out of focus and in contradiction with elements in the foreground. Her canvases depict the world after the apocalypse but also embrace hope. It is as if anything is possible, as if a new chance is being given to the humankind, or on the contrary to nature to live in peace without the violent interaction of people.

The paintings that are currently exhibited at the Pill show scenes from everyday life. Living in Paris, Nielsen portrays the momentary scenes in the Parisian suburbs as well as her back yard. Although audiences might be familiar with the scenes such as a backyard covered with snow or an abandoned site, the paintings evoke the feeling of the apocalypse and end of humanity. In her first ever show in Istanbul, Nielsen shows her vision of transitional spaces and their state of meaning in a series of paintings meant to generate a rather dark impression in its various depths and layers. She combines, paint, photographs and screen prints to create the world in which we may find ourselves. Some of Nielsen's work appears like moving images giving the audience the impression of deja vu. This impression is emphasized by the redundant use of an all-over screen-print that blurs the landscape and alters the viewers perception in a game of black-transparency. Matter passes through it, then the surface is scraped and the dirt blown away. Despite the figurative, what the audience are looking at is not obvious. One has to spend the time to properly grasp what is given on Nielsen's canvas, in order to tune with its layered temporality.

Nielsen was born in 1983, in Denmark, and her work is featured in the prominent museum and private collections such as the collections of Mac/Val Musee d'Art Contemporain, Fonds Municipal d'Art Contemporain, Centre National des Arts Plastiques and Societe Generale Contemporary Art Collection. She has participated in group exhibitions in France, Slovakia, Russia, Spain, the U.S. and Portugal and currently is holding exhibitions in Switzerland, France, Norway, Wales and England.
RELATED TOPICS