Hashashin and Crusaders: A history of the Middle East according to Wael Shawky 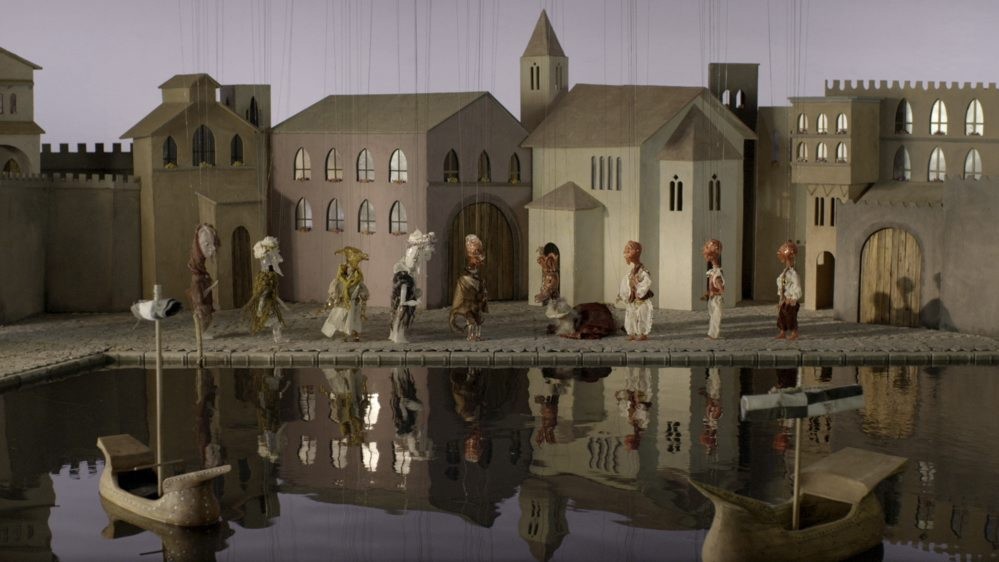 Egyptian artist Wael Shawky's video titled ‘Road to Cairo' is part of his Cabaret Crusades trilogy, based on Amin Maalouf's book, 'The Crusades through Arab Eyes' and can be seen at the Istanbul Pera Museum as part of the Jameel Prize Exhibition until August 14

I first encountered Wael Shawky's work in 2015 at the "Rainbow in the Dark" exhibition at Salt Galata. One always hesitates before committing oneself to viewing a video piece due to the fact that there is never enough time to do so at exhibitions and one tries to spend an equal amount of time in front of each artwork. It was with such reservations that I entered the chamber where I would see Shawky's video. From my first glimpse of "Road to Cairo," the second episode of his series, "Cabaret Crusades," I was hooked, staying in the chamber the entire hour and singing Wael Shawky's praises ever since.

To be honest, it's a bit unfair. Shawky takes several of my interests and rolls them into a ball of magic which mesmerizes me. He uses marionettes to act out the scenes described in Amin Maalouf's acclaimed historical book, "The Crusades through Arab Eyes." Puppetry and marionettes have long been an interest of mine, as they are a very effective form of storytelling; likely because, in my opinion, marionettes reflect the helplessness of the human condition. You can literally see the strings of fate, history or whatever name you prefer to use directing people's actions while displaying a heightened sense of inevitability and melancholy in the viewer. The marionettes in "The Road to Cairo" are made of clay; the material which is, according to the Quran, what humans are made of. These figurines also appear like aborted attempts to imitate human beings; handmade in the style of the Aubagne region of France. 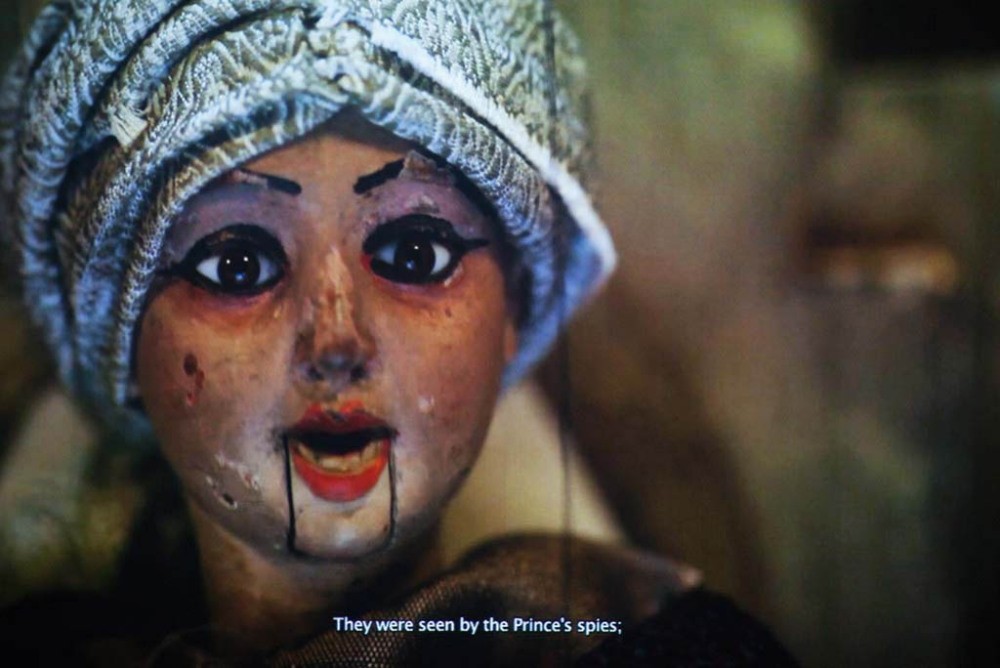 The "Cabaret Crusades" trilogy is mostly a story about violent and power-hungry men but when women make an appearance, they become even more potent.

The puppets that Shawky has created to play in the roles of various amirs, knights and lords of the Middle Ages are disfigured and ugly, to the extent that some of them - Muslim as well as Christian - have animal faces. Add to this the uncanniness of the voices coming from faces and mouths that do not move and the enchanting atmosphere is complete. The way that Shawky manages to keep the faces of the puppets eitherdevoid of emotion and stone-cold or full of passion or anger depending on narrative demands, is truly fascinating. Music, camera angle and inflection of voice are all elements Shawky uses to create the flawless performance. The marionettes,representing both European or Arab characters, all speak in Arabic. It is, for no good historical reason, disorienting to hear Christian rhetoric in Arabic, and we have the crusading Europeans in this film speaking the language - they are as it were dubbed into Arabic. It is also a reversal of our visual and cinematic memory: not Arabs speaking in English, but Europeans speaking in Arabic in the Holy Land.

The story of the Crusades, as we know from history, is one of power, anger, betrayal and violence. The videos cover a very long period of history, taking us on a geographic journey from Rheinland to Venice, Constantinople, Aleppo, Damascus, Jerusalem, Baghdad and Mecca.When Shawky introduces various scenes, the relevant historical date and the name of the city appear briefly on the screen, but sometimes the cut from one city and date to another is not clear. There are too many characters to keep track of but the overarching message is evident. During the Crusader kingdoms in the Middle East, both Muslims and Christians changed sides, made pacts with "the enemy" to beat their"own" and had no scruples in doing so. We see that there is enough violence and schism among Muslims without the explosive addition of the Crusaders into the mix. We see Hassan Sabbah and his hashashin in their lair, sitting in a circle with their dead marionette eyes, shaking their heads, totally under the control of their leader's suggestions (naturally with the help of drugs). We watch them sway as they sit, the camera zooms into their individual but indistinguishable misshapen faces, and then the music heightens to a rave-like intensity. Then we see them going into the mosque in Baghdad and assassinating people. The protruding animal-like mouths of the marionettes come into their own during these moments of murder and death. It is hard not to draw parallels with DAESH members detonating bombs near the Mosque of the Prophet or brainwashed Turkish officers bombing the Parliament. 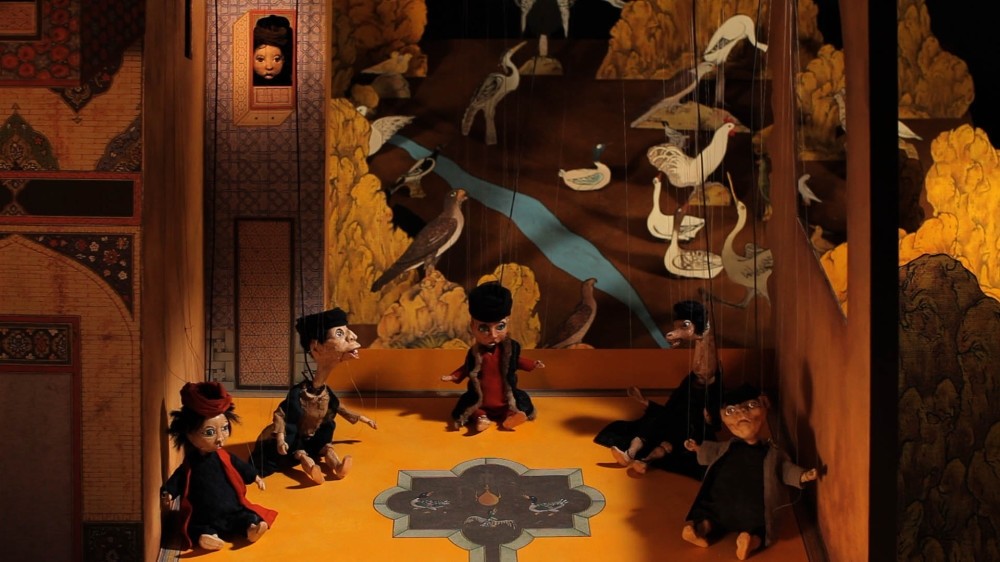 The "Cabaret Crusades" trilogy is, of course, mostly a story about violent and power-hungry men but when women make an appearance, they become even more potent. There's the daughter of the amir of Aleppo who seems to be given in marriage to men several times over to procure a ruler who will strengthen the town militarily. However, the groom is assassinated each time and then we see an interminable wedding scene, with people dancing with the bride in the middle, as if there's been a glitch in the film and we're seeing the same scene over and over. There is the daughter of the King of Jerusalem who is forced to make an agreement with the Muslims who want to take back al-Quds, and who sings of her desperation from a tower. It is like a siren's song and the singer sounds not unlike Fayrouz.

The third episode of "Cabaret Crusades," which I saw at the 2015 Istanbul Biennale in a hamam in the Byzantine heart of Istanbul, Balat, is called "The Secrets of Karbala," but it deals equally with Christian internecine violence. The most dramatic scene for an Istanbulite like me is the Latin Crusaders coming to Hagia Sophia, looting it and setting it ablaze, and then setting off in sails with crosses blown to a large scale by the wind, towards Palestine. The marionettes, this time, are made of colored Venetian glass and indeed, some of the story is set in Venice.

Happily, the "Road to Cairo" returned, as it should, to Istanbul this summer with the Jameel Prize exhibition, and I readily spent another disturbed hour in a dark room contemplating history. The first episode of Shawky's trilogy, "The Horror Show Files," in which the marionettes are made of wood, has not yet made it to Istanbul. Although this is in some ways unfortunate, it's also nice to know that there is still more Shawky for me to discover.
RELATED TOPICS