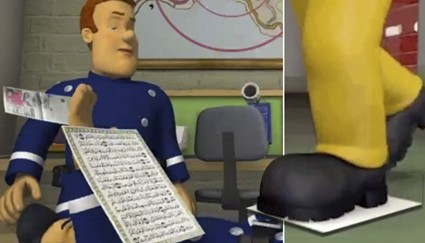 by Anadolu Agency
Jul 28, 2016 12:00 am
The makers of a British animated series have apologized "sincerely" after a character in one episode appeared to step on a page of the Quran.

In the episode of "Fireman Sam," a long-running children's television show, a character is shown slipping on some paper on the floor while carrying a tray of hot drinks.

The sheets fly into the air and one appears to distinctly be covered with Arabic script.

Miqdaad Versi, an assistant secretary-general of the Muslim Council of Britain, said the page appeared to match verses 13 to 26 of Surah al-Mulk, the 67th chapter of the Quran.

"[I] have no idea what went through the producers' minds when they thought this was a good idea #baffled," Versi tweeted on Tuesday.

Channel 5, which airs "Fireman Sam," said it would not show the episode again and had removed it from its website, where it was available to be seen until this week.

The episode was first broadcast in 2014.

Program makers HiT Entertainment confirmed a section of the Quran was briefly depicted instead of "illegible text."

It said in a statement released late on Tuesday evening: "It has been brought to our attention that in an episode of Fireman Sam (Series 9, Episode 7), an image of the Quran is briefly depicted. The page was intended to show illegible text and we deeply regret this error."

"We sincerely apologise for any distress or offense it may have caused," the statement added.

"We will no longer be working with the animation studio responsible for this mistake. In addition, we are taking immediate action to remove this episode from circulation and we are reviewing our content production procedures to ensure this never happens again," the statement said.