Forgotten history of Istanbul rises with a site-specific installation 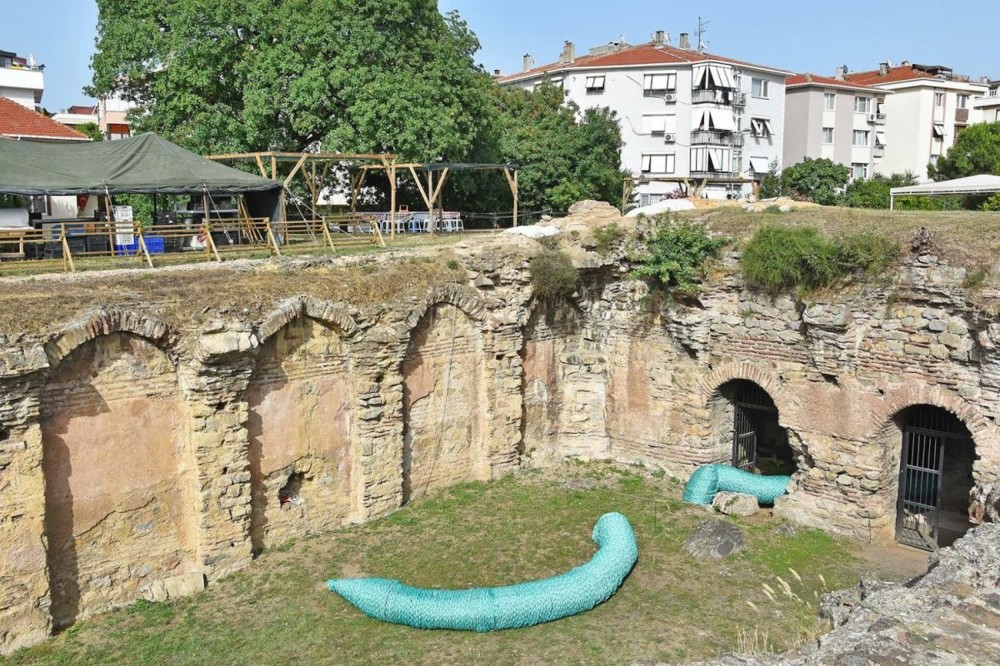 by daily sabah Aug 22, 2016 12:00 am
The exhibition of artist Hera Büyüktaşçıyan's site-specific installation "Rising… a small height from the ground" at Küçükyalı Archaeopark has been extended to Sept. 3. The exhibition, part of a project titled "The Traces of the Past for Contemporary Creativity: Urban Archaeology and Küçükyalı Archeopark," supported by the Istanbul Development Agency, is located in the largest known and surviving archaeological site on the Asian side of Istanbul, currently seeing much excavation and public archaeology. The installation indicates the ancient history of Istanbul, fictionalizing an imaginary creature crawling under viewers' feet, and invites the viewer to discover the cistern containing the remains of the Patriarchal Monastery of Satyros, also known as the Anatellon, ''the rising one," where Patrick Ignatius was exiled.

Born a prince, Ignatius would return from his imposed exile to the Prince's Islands to become the patriarch of Constantinople. The imaginary creature created by Büyüktaşçıyan lives in an invisible world, without any sense of place and time, although the creature surfaces via Büyüktaşçıyan's installation to remind people of what was long forgotten. Inspired by mosaics, the artist uses a rope to symbolize the creature, emphasizing the strong connection between the Prince's Islands. The mystical creature crawls around the archaeological site to remind people of the forgotten past, reviving collective memory. The artist chose the name "Rising… a small height from the ground" for her installation, from a verse from a poem by Byzantine historian Anna Komnena, dedicated to the gardens on the Anatolian side of Istanbul.

The Küçükyalı Archaeopark is the only remaining active archaeological site in the Anatolian side of Istanbul. The excavations began in the early 2000s and made famous the Satyros Monastery, built by Ignatius, the Patriarch of Constantinople, in the second half of the ninth century. Written sources dating back to the Byzantine Empire describe the monastery as one of the most magnificent monasteries ever built on the Prince's Islands. The coins, pottery and other artifacts unearthed during the Küçükyalı excavations are currently on display at the Istanbul Archaeology Museum. The park integrates archaeological excavations and cultural events, and is protected by an initiative of locals who embraced finding history beneath their feet. The archaeological site is currently surrounded by urban settlements and crowds. Once known for gardens and waterside mansions, the Küçükyalı neighborhood is now experiencing modern urban transformation.
RELATED TOPICS