Japan to feature Ottoman expeditions through works of Matrakçı Nasuh 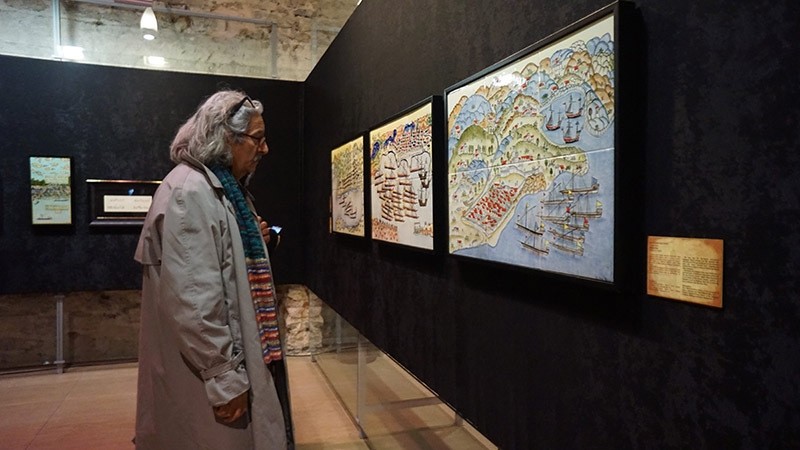 The '16th Century Genius Matrakçı Nasuh' exhibition, under the auspices of the Presidency, İKASD, will open at the Tokyo Shibuya Culture Center Owada Gallery in Japan on Sept. 1

The 16th Century Genius Matrakçı Nasuh' project, designed under the auspices of the esteemed Republic of Turkey Presidency by the Istanbul Intercultural Art Dialogues' Association (İKASD) will be open to art-lovers in Tokyo between Sept. 1 and Sept. 8 following the exhibitions in Sarajevo, Belgrade, the 2015 G-20 Antalya summit, Istanbul and Wien.

The project exhibition, featuring 41 works in total and curated by Beste Gürsu, will include works ranging from a series of tile panels including a selection from eastern and western expedition city maps in Matrakçı Nasuh's, "Beyan-I Menazil Sefer-I Irakeyn," "Tarih-i Feth-i Şikloş Estergon and İstol Belgrad" and have been recreated by 12 female artists under the leadership of tile artist Sevim Ersoy. A selection from Matrakçı Nasuh's verses has also been transferred into diwani scripts and several of his signature features have been reflected on canvas with a modern twist.

While conveying the virtues of Nasuh, one of the hidden geniuses of history, through various disciplines of art, the viewer will be able to follow the routes of expeditions through Matrakçı's miniatures and will have the opportunity to explore the 16th century of the Ottoman Empire artistically, chronologically and politically in this exhibition.

Daily Sabah conducted an interview with curator Beste Gürsu on the inspirations, purposes and future destinations of the project.

DAILY SABAH: How did the Matrakçı Nasuh Project come into being?

BESTE GÜRSU: The common ground of all our projects, which are carried out by the board of directors and the İKASD team, brings our mission and various disciplines together with the purpose of introducing our country's history, culture, art and artists on international platforms while expressing and explaining our traditions. Characterized as "The Genius of the 16th century" in our history, the "Matrakçı Nasuh" project is also prepared with this vision.

Many intellectual figures lived in the 16th century. Matrakçı Nasuh, who was trained at Enderun (a special school in the Ottoman court) during the reign of Sultan Bayezid II, participated in the eastern and western campaigns of Süleyman the Magnificent and embodied numerous virtues of the 16th century, making the historical richness of his time immortalized with his studies.

Under the guidance of our late honorable President M. Kamil Dürüst, the Matrakçı Nasuh Project was first initiated in 2012. Our project gained momentum with great motivation when UNESCO announced 2014 and 2015 as the "Years of Matrakçı Nasuh," marking the 450th anniversary of his death. The İKASD then submitted the project to UNESCO's National Committee and it was approved in 2013. The project disciplines that we set in the beginning and the support that we provided to the project's instruments paved the way for the development and prosperity of the project. Designed in a three-year period, the project, "16 Yüzyıl Dahisi Matrakçı Nasuh" (16th Century Genius Matrakçı Nasuh) is realized under the auspices of President Recep Tayyip Erdoğan, who honors our efforts.

DAILY SABAH: What has been done for the project in detail?

GÜRSU: Various disciplines were brought together to ensure the permanence and influence of the project, which is scheduled to open in 10 cities, of nine different countries, on three continents. Twelve prominent female artists illustrated Matrakçı Nasuh through different art disciplines in the project's exhibition section.

They reflect a selection of his maps on tile boards, one of which is "Beyan-ı Menazil-i Sefer-i Irakeyn" (The Chronicle of the Stages of the Campaign of Iraq and Persia) in his eastern expeditions, and the other, "Tarih-i Feth-i Şikloş Estergon İstol-Belgrad," (The History of the Conquest of Siklos, Esztergom and Üstol-Belgrade) in his western expeditions. Calligraphy was implemented to illustrate his poetry and talent in this art form. Through the use of modern art, Matrakçı Nasuh was depicted as a mathematician, sportsman and sword master.

However, art was insufficient to display his qualifications. "Tarih-i Sultan Bayezid" (The History of Sultan Bayezid), which was translated to modern Turkish by Mertol Tulum and is featured in the Topkapı Palace's Rewan Manuscript Collection, was published with the support of Turkey's Turing and Automobile Institution as a part of the project. İKASD collaborated with many state institutions for the project. The Culture and Tourism Ministry's Department of Fine Arts released an album titled, "16th century Turkish music." The Department of Valuable Papers at PTT also released a special stamp commemorating him. All these are gifted to the participants of the project around the world.

DAILY SABAH: How many countries has the exhibition been displayed in so far?

GÜRSU: 16th Century Genius Matrakçı Nasuh first appeared in Vijecnica in Sarajevo, the homeland of Nasuh, in May 2015. The opening of the exhibition was overseen by Emine Erdoğan and Sebiye Izetbegovic. The second stop of the exhibition was the Belgrade Ethnography Museum in Serbia in September 2015. The opening of the exhibition was overseen by Turkey's ambassador to Serbia, Kemal Bozay, and members of the Serbian state protocol. As the most important project carried out by Turkey in Serbia so far, the project caused a stir. It is reported that the museum was visited by 2,500 people in one month. The exhibition was also set up in the greeting hall of the G-20 Summit in Antalya on Nov. 15 and Nov. 16 and it received great interest by the world leaders and participants of the summit.

The first display of 2016 took place at the Dolmabahçe Palace Art Gallery in Istanbul. Hosted by Turkey's Turing and Automobile Institution, the exhibition was opened with a huge ceremony and a long guest list. Then-Prime Minister Ahmet Davutoğlu visited the exhibition with his wife and shared their experience on their official social media accounts and expressed their admiration. Upon the demands made by art lovers not only in Istanbul, but also all over Turkey, the duration of the exhibition in Istanbul was extended for a week.

DAILY SABAH: What were the reactions and feedback of the viewers?

GÜRSU: In fact, the project also paved the way for many new experiences for Turkey, Turkish art and culture. The exhibition was displayed at Kunsthistorisches Museum Wien Neue Burg Ephesus Museum (The Ephesus Museum in Vienna) between May 25 and June 12, 2016. The museum hosted an exhibition from Turkey for the first time and it was a magnificent experience to see Matrakçı Nasuh among the remains of the Ephesus.

The 16th Century Genius Matrakçı Nasuh has been held in five different cities since May 2015. The feedback we have received shows that there has been a huge interest for the exhibition. It is very pleasing to receive positive feedback after a process created with a professional structure.

DAILY SABAH: Can you provide us with brief information about the Tokyo exhibition?

GÜRSU: Now, the exhibition will open in Japan, our sixth spot. The Tokyo Shibuya Owada Culture Center will host the 16th Century Genius Matrakçı Nasuh project from Sept. 1 to Sept. 8. On Sept. 1, the opening ceremony of the exhibition will take place at the Owada Gallery and a conference and a live performance on Matrakçı Nasuh will be held on Sept. 5 at the Densho Hall. We think that there will be great interest in the exhibition, as media coverage suggests.

It is a great thrill to introduce new aspects of the project according to the cultural differences of every country we visit. Following the display in Japan, the project will be presented to art lovers at the UNESCO building in Paris on Oct. 27, and the project will be laid to rest for this year after a display in Washington in December. After the exhibitions in Rome and Budapest in 2017, the project will come to an end with the grand finale in Ankara. In all project travels, the exhibition is opened with a conference titled, "Matrakçı Nasuh and His Cities" by accomplished Turkish architect Sinan Genim and a live concert performed by the musicians of Turkey's Culture and Tourism Ministry. Throughout the exhibition, the visitors are able to watch the film narrated by Genim as well.

The project, which is held in prestigious venues all over the world, is announced to the public and the entire media thanks to media coverage by the project's global communication partner Anadolu Agency (AA) and media sponsor, Turkuvaz Media Group.

Although this project is titled, "The 16th Century Genius Matrakçı Nasuh," it is also about the 10th sultan of the Ottoman Empire, Süleyman I, known as "Süleyman the Magnificent" in the West for his successful campaigns, and "Süleyman the Lawgiver" in the East for his justice. The project is centered on the works of Nasuh who wrote about Süleyman's campaigns, an unforgettable figure in our history. The route highlights the number 10 in Süleyman's life (This number is believed to have given good luck to Süleyman I who is the 10th Ottoman emperor). I want to thank every individual, organization and institution that has supported this project since the beginning.