Italy's museums turn to the private sector for funding 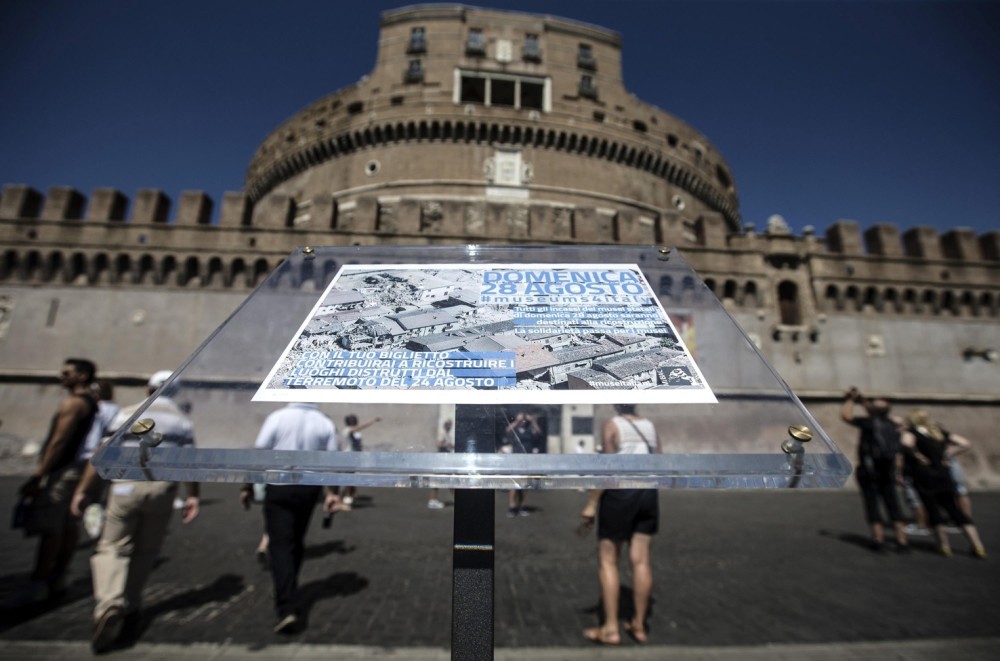 The Castel Santu2019Angelo in Rome
by Associated Press Sep 07, 2016 12:00 am
Italian taxi drivers and concierges are being enlisted to encourage tourists to visit some museums. In Florence, supermarket customers raised 250,000 euros ($275,000) by opting to help the city's art instead of receiving store loyalty rewards. And in Venice, the Peggy Guggenheim Collection is partnering with big-name businesses including ones that make watches, grappa and cologne.

Whatever the formula, museums are increasingly looking to private-sector donations, collaborations or sponsorships to survive and develop. In Italy, where government coffers have long been too meager to adequately safeguard and maintain its vast array of artworks, historic palazzi and ancient ruins, state-run museums and monuments are scrambling to follow the example of private institutions after decades of general distrust between culture and business.

Museum officials and other high-profile patrons of the arts, ranging from an espresso coffee mogul to a contemporary arts space funded by a tire-maker, flocked to Florence, where centuries ago the Medicis and other princely patrons nurtured Renaissance masters, for an all-day brain-storming session this week.

Lending lofty inspiration to the lively debate held in the Uffizi Galleries was a fresco of Botticelli, who was just one of the many artists who enjoyed the Medicis' favor.

Participants had tasked themselves with eventually drafting practical proposals for Italy's culture minister, including the potential for public-private relationships.

Also participating were potentially deep-pocketed benefactors, like an investment group from the United Arab Emirates.

"The prejudice between money, business and culture is still very deep in Italy," said Michela Bondardo, a culture policy expert who serves on the Contemporary Arts Council of New York's MoMA. She urged Italy's state museums to change mentalities and forge long-term alliances with corporate partners.

Under the leadership of Premier Matteo Renzi, who used to be mayor of this Tuscan city steeped in art, Italy's state diffidence toward associating public-sector culture with the private sphere is easing.

The Uffizi Galleries' new director is Eike Schmidt, a German who is part of Franceschini's new breed of museum directors, following decades of Italians-only at the helm of state museums.

In an interview with The Associated Press, Schmidt noted that the national culture budget cuts of the past 15 years have finally been reversed, with this year's budget up some 27 percent over last year's, although still skimpy at some 2 billion euros ($2.2 billion).

And a 2014 law allowing 65-percent tax breaks for donations to help Italy's public museums, monuments and arts venues has triggered a total of nearly 120 million ($135 million) in donations, Franceschini said.

"But this is not enough for such countries as Italy and Greece," so rich in art and archaeology. "So private donors' patronage, especially for restoration, continues to be needed," Schmidt said.

Italy has been relying heavily on businesses including fashion companies, a mattress manufacturer and a textile tycoon to pay for restoration of prestigious monuments. Shoe-and-luxury-goods-maker Tod's is footing the bill to clean the Colosseum; Fendi sponsored restoration of Rome's Trevi Fountain, then held a summer fashion show on transparent walkways crossing over the water.

Eisa Bin Nasser, president of Dubai-based Alserkal Group of companies, said he came to Florence to listen to the museums' proposals and for the business to consider sponsoring some restoration.

But some participants at Monday's strategy session highlighted what they called the sponsorship approach's limits. Among them was the director of the Peggy Guggenheim Collection in Venice, whose home is an 18th-century palazzo on the Grand Canal.

Since 1992, the institution has forged partnerships of at least two years' duration with a host of companies eager to associate their brand with the prestigious art collection.

"The era of single-sponsored events is passe," Philip Rylands, who is also the collection's Foundation director for Italy, told the strategy sesson.

Later, he explained in an AP interview that these long-running business partnerships allow him the tranquility of "knowing that I have a platform of fundings" to plan exhibits two or three years down the line.

But, Rylands acknowledged, the majority of Italian musuems, being public, "just don't have the kind of liberty to dedicate themselves seven days a week to the friendship, to the needs, to the requirements of this relationship with the companies."

Only relatively recently have museums even been allowed to keep their own revenues. Before that, all money went to the state's overall coffers.

Flourishing state museums like the Uffizi contribute 20 percent of their revenues to a "solidarity fund" for smaller, lesser known museums, often in the provinces, like the town museums hard hit by the Aug. 24 earthquake.
RELATED TOPICS