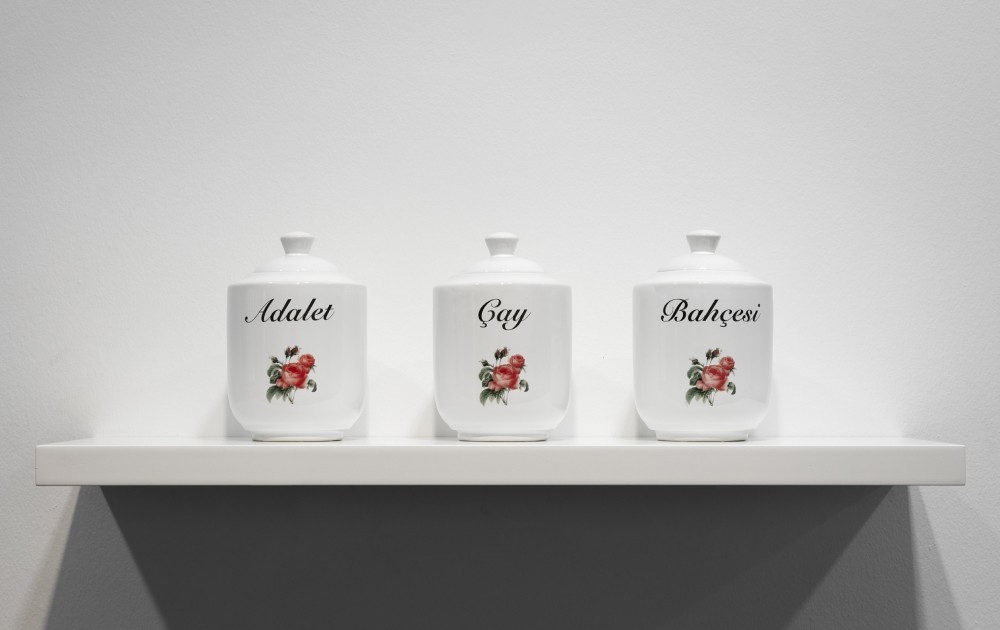 On a cloudy morning last week, I found myself in a Karaköy art gallery, where I took refuge from the breezy, depressing weather. "Whole-Half," one of the most intriguing works featured in that gallery's new exhibition, illuminated the gallery. Yasemin Özcan, the visual artist, writer and ceramicist whose works will be on display at artSümer until Nov. 26, had combined a gold-glazed ceramic plate and a mirror to transform one wall of the gallery into a site of illuminations and reflections. Since the street on which the gallery is located has become occupied with hip coffee shops and new residences in recent years, it was truly refreshing to come across artwork that made such interesting use of light and traditional materials. It suddenly felt warmer inside and the exhibition's title, "Dead-End of Bliss," couldn't be more different from the super-optimistic and cool mood that reigns over things on that Karaköy street.

"In my artistic practice, I have always found the relationship between artwork and gallery spaces to be crucial," Özcan told Daily Sabah in an interview. "The possibility of my works having a dialogue with their exhibition spaces has always excited me."

A graduate of Mimar Sinan Fine Art University's ceramics and glass department, Özcan has completed numerous residencies including one at Cite des Arts in Paris and Transfer NRW in Germany. Her 1997 work, "Soap opera synopses" was my favorite at the Rampa Gallery's 2014 show titled, "This Secret World That Exists Right There in Public." Özcan's works have been on exhibit at CCS Bard New York, the Ludwig Forum Museum, Secession Vienna, Arter, Apex WKV Stuttgart and the Bochum Museum, among others.

When work for the show began, the word "dead-end" became a companion for Özcan and accompanied her as she went along. What resulted was a very literary exhibition, beginning from its title, "Dead-End of Bliss." In one work Özcan documents a sprouting bean in her kitchen sink; the image has the air of a film by Chantal Akerman with its combination of the depressing and the mundane. Another work explores the mysterious connection between a mulberry tree and spiritual self-discovery.

From Özge Ersoy's "Was this a mulberry grove?" a text written to accompany the exhibition, I learned how the artist was inspired by a 700-year-old black mulberry tree in front of the shrine of Hacı Bektaş-ı Veli. Özcan asked herself, "what does a tree that lived this long remember and what does it forget?" The only way to clean the stains the black mulberry left in her palms, Ersoy explains in the text, is by way of rubbing her palms with the leaves of the mulberry tree. "How do we heal ourselves, how could we heal our own memory using our existing wisdom -- we started thinking about these things together."

On ceramic tiles, Özcan has placed an excerpt from Irish writer Brian Friel's play, "Translations": "To remember everything is a form of madness." In another work, she takes three ceramic containers from a kitchen and transforms them into art by attaching words to them: "Justice Tea Garden."

"In one sense, concepts played the role of bricks while preparing this show," Özcan said. "I placed one on top of another. These concepts, which I have been reflecting on for the past four years, have found their expression here. The word 'bliss,' combined with our collective memories about black and white Turkish films, pointed to a distant potential." Creating a "dead-end" in the exhibition space, complete with a tea garden and an impasse, is a good example of Özcan's conceptual approach to creating the show. Her interest in language is another central theme. "Language and its profound and mesmerizing world play a big role here," she said. In Turkish, 'happiness' (mutluluk) is a much more contemporary concept when compared to 'bliss' (saadet). 'Dead-End of Bliss' blinks at our search for individual and social bliss. In that sense, the exhibition had become increasingly simple before it reached its current pure state."

"Expanding on her devotion to material, the artist picks everyday objects like traditional ceramic storage cups (sugar-tea-coffee), plates, and street signs," the exhibition text reads. "She employs gold as a symbol for power, copper for opposition, and green fabric for sanctitude, thus exploring the value relationship we establish with objects. Özcan traces knowledge and wisdom, which have changed form in today's world."

In "Single Glove", a root-dyed wool single glove, Özcan uses a very personal object. "The glove is 90 years old and belongs to my family," Özcan said. "Does justice always bring equality? Like the question itself, I have left the glove hanging in the air. My grandmother's aunt has woven the glove. I focused on my grandmother's sense of justice; she made her son and daughter share a pair of gloves between them. And this brings us to this glove that can be used by neither because it is a single glove."

In "Lions and Gazelles," an installation featuring painted woven wool carpets with a fir base, the viewer is left to wonder whether she is the hunter or the prey and reflect on the nature of innocence and guilt.

"The glove had preserved its wisdom just like the lions, the gazelles, and the mulberries," Ersoy wrote. "It had advised to be a bit of a witness, to remember, to forget and to make an effort to grieve. Aware that grieving doesn't mean that the past, the loss would be covered up. There was no promise to save."
RELATED TOPICS